Arizona Corporation Commissioner Justin Olson, who was listed as an event speaker on the Trumpstock website, told the Mirror he will not attend.

And Mohave County Sheriff Doug Schuster was listed as a speaker, but after the Mirror published at story Sept. 23 noting that event organizer Laurie Bezick included his name on the Trumpstock website as an attendee, a representative from Schuster’s office said he had never agreed to attend the event.

“Sheriff Schuster has met with Ms. Bezick on other issues and this event was mentioned, however Schuster is not associated with the event,” Micaela Carlson, administrative assistant for Schuster, said.

But another elected official was recently added. State Rep. Kelly Townsend, R-Mesa, has been added as a speaker. Multiple attempts to reach the Arizona legislator to confirm her attendance were unsuccessful.

Attempts to reach U.S. Rep. Paul Gosar, R-Prescott, who is also listed as a speaker, were unsuccessful.

It also appears the event is running into some snags. Bezick recently took to Facebook to ask for 15 RVs for VIPs for the event, which is set to take place in a little more than a week. 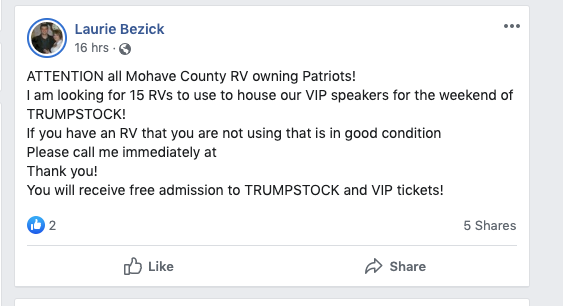 Bezick told the Mirror previously that the event is meant to bring people together to celebrate President Donald Trump and that people from all walks of life are welcome. Bezick said she hopes that Democrats apply to speak, as well.

“You have to be able to hear from the opposition, too,” Bezick said.

The event’s website states that a portion of proceeds will go to first responders and veterans. Bezick said she is working with Lake Havasu-based non-profit Veterans United Arizona. It is unclear how much of the proceeds will go to the organization.