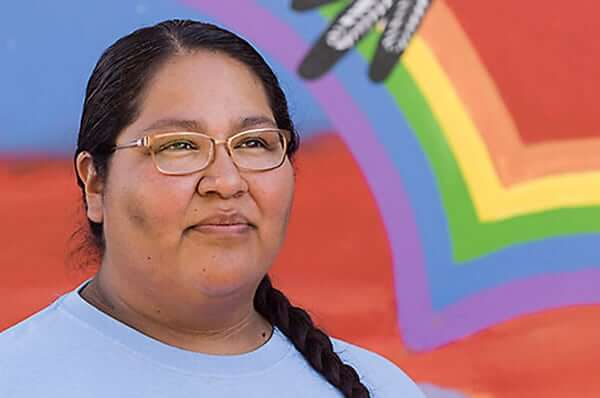 The late Catherine Josemaria, a Tohono O’odham woman born before Native Americans were granted U.S. citizenship, before women across the country could vote, before people who didn’t speak English could access ballots in their language, has a granddaughter who is now an elected official in Pima County. Last week, Gabriella Cázares-Kelly was elected as Pima County Recorder, the agency in charge of voting registration and early voting.

Once she’s inaugurated in January, she will be the first Native American woman elected to a countywide seat in Pima County, she said. In a Facebook post the day after the election, Cázares-Kelly reflected on the cultural influence the Tohono O’odham people have in Arizona and their lack of political representation and influence.

“The state of Arizona is derived from the O’odham words alĭ ṣonak. Pima County is named after O’odham people. And the heart of Pima County is Cuk Ṣon — now known as Tucson — another O’odham word,” she wrote. “We are surrounded by place names that come from the Tohono O’odham language, and yet no Tohono O’odham people or any other Native Americans have been a part of our county’s government. We have never been in the rooms or at the tables where decisions that impact our lives are being made.

My win is a bitter-sweet accomplishment and we still have a long way to go. This is just the beginning.”

Cázares-Kelly, a Democrat, won the contested race with about 59% of the vote, according to unofficial results. Her opponent was Republican candidate Benny White, a former member of the Pima County Elections Integrity Commission.

More than 283,000 voters in Pima County cast a ballot for Cázares-Kelly.

For many election cycles, Josemaria — her late grandmother — voted in elections, proudly donning her “I Voted” sticker, Cázares-Kelly wrote in a campaign email on Indigenous People’s Day in September. For most of her life, Josemaria didn’t have the right to vote because the Arizona Constitution banned Native people from voting. That changed in 1948, but she could still be turned away from the polls until the civil rights movement brought about the Voting Rights Act in 1965 to outlaw discriminatory voting practices. Josemaria voted for the first time a decade later when she was nearing 60, when Congress amended the Voting Rights Act in 1975 to require voting materials be provided in a language other than English.

“My late grandmother Catherine Josemaria was born here in Arizona in 1918. Although our people were here first, my grandma was not considered a U.S. citizen at her birth because she was O’odham. She was not born with the right to vote…”

During the year-long campaign that yielded a historic victory, Cázares-Kelly said her hu’uli, her grandmother, has been with her.

“She was a brilliant person, so well respected, she was hilarious,” Cázares-Kelly told Arizona Mirror. “I’ve been carrying her in my heart throughout this whole process.”

“I’m really proud of the campaign that we ran, it was very honest and transparent, informative and empowering,” she said.

When in office, Cázares-Kelly said she wants to increase voter registration access and information, improve communication between the office and the community it serves, expand early voting in tribal lands, and incorporate technology that allows voters to track their early ballot.

Before running for office, Cázares-Kelly worked as a public school teacher, volunteered for nearly eight years doing voting outreach and co-founded Indivisible O’odham, a group that resists the border wall construction in the Arizona-Mexico region, including on her tribal and ancestral lands.

Cázares-Kelly said she’s excited for her network of family, former students, and community members to have direct access to an elected official.

“My cousin has front-row access to an elected official who is in charge of voting to ask his voting questions. My former students that are still texting me, they have access to someone who is about to be sworn in as an elected official,” she said. “It’s really powerful — it’s been mind blowing.”

White, who lost the race, hasn’t contacted or reached out directly to congratulate the Pima County Recorder-elect, Cázares-Kelly said.

Correction: A previous version of this story misspelled the last names of Catherine Josemaria and Gabriella Cázares-Kelly.