Frank Riggs and His Terrible, Horrible, No Good, Very Bad Day on Twitter

A former California congressman who this year lost his second statewide race in Arizona in four years went on Twitter tirades against political gadflies and this reporter Sunday evening, during which he called critics “gutless punks,” “cowards,” “sniveling” and “trolls,” and belittled them for never having served in the military.

This morning, Frank Riggs took his Twitter account down, apparently in response to questions from the Phoenix New Times about his online behavior. About an hour later, it reappeared, but with all of the tweets in question removed and replaced with a Veterans Day message.

Riggs’ meltdown Sunday stemmed from the late afternoon reports on vote tallies for the day, which saw his Democratic opponent for superintendent of public instruction, Kathy Hoffman, declare victory after increasing her lead to  more than 46,000 votes.

Shortly after that, public relations consultant David Leibowitz wondered on Twitter whether Riggs would attempt to run for another statewide office in the future. That prompted Riggs to lash out at Leibowitz and call him a “gutless punk” because he had never worn a military uniform or held public office.

And that Leibowitz (and others) had the temerity to reference Riggs’ loss on Veterans Day led the Army veteran to continue his barrage of insults.

“You are a gutless punk who has never served, never run & never will… You’d never make it a week through boot camp or the police academy. You are a troll & coward,” he wrote to Leibowitz.

Leibowitz responded that Riggs was a “narcissistic partisan() who mistake(s) self-serving campaigns for public service.”

“That’s why you lose when you run – voters sense your self-importance and need to self-aggrandize,” he added. 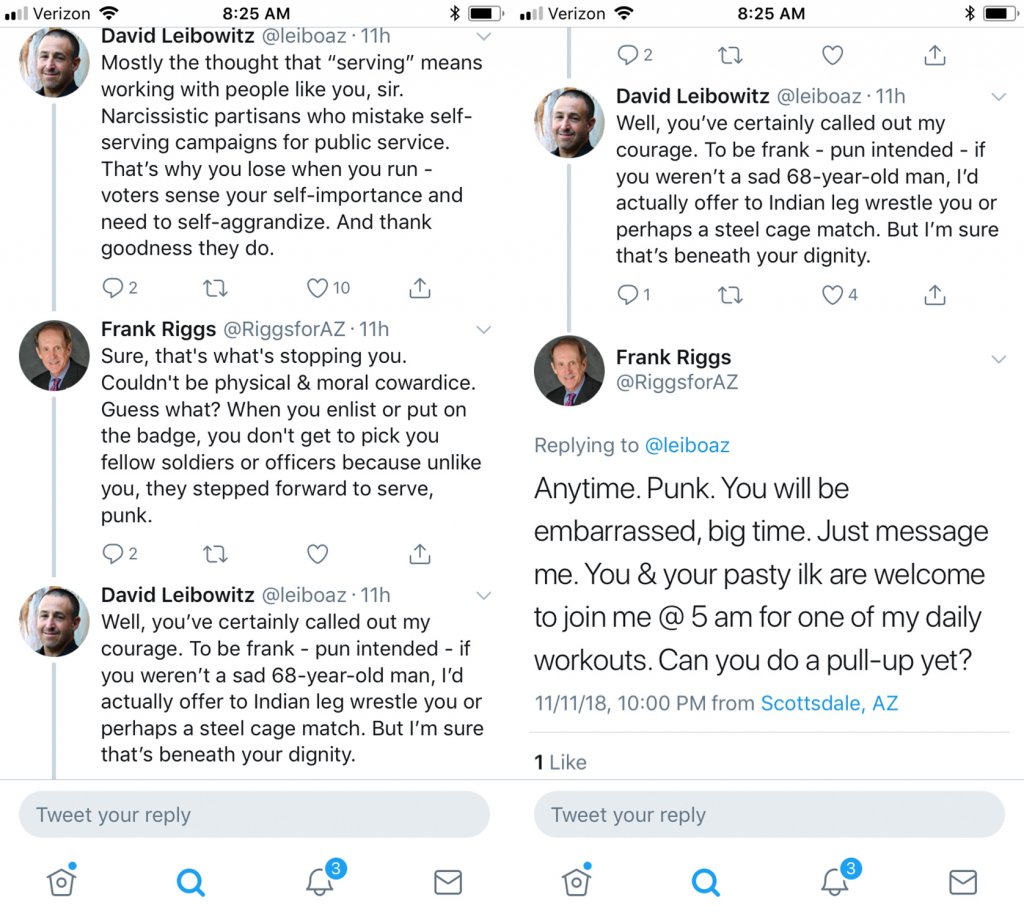 When Riggs said Leibowitz was a “physical and moral” coward because he was not a veteran, Leibowitz joked that, “if you weren’t a 68-year-old man, I’d actually offer to Indian leg wrestle you, or perhaps a steel cage match. But I’m sure that’s beneath your dignity.”

Nothing was beneath Riggs’ dignity Sunday night, however: “Anytime. Punk. You will be embarrassed, big time. Just message me. You & your pasty ilk are welcome to join me @ 5 am for one of my daily workouts. Can you do a pull-up yet?”

After Leibowitz sought to end the spat and “be the bigger man” by walking away from the argument, Riggs refused to relent.

“You’ll never be the bigger man until you’ve walked in my shoes and put your life on the line,” he retorted.

In one response, Riggs set his sights on two political gadflies who offended Riggs by “liking” one of Leibowitz’s tweets, accusing each of being of being a “punk & coward.” 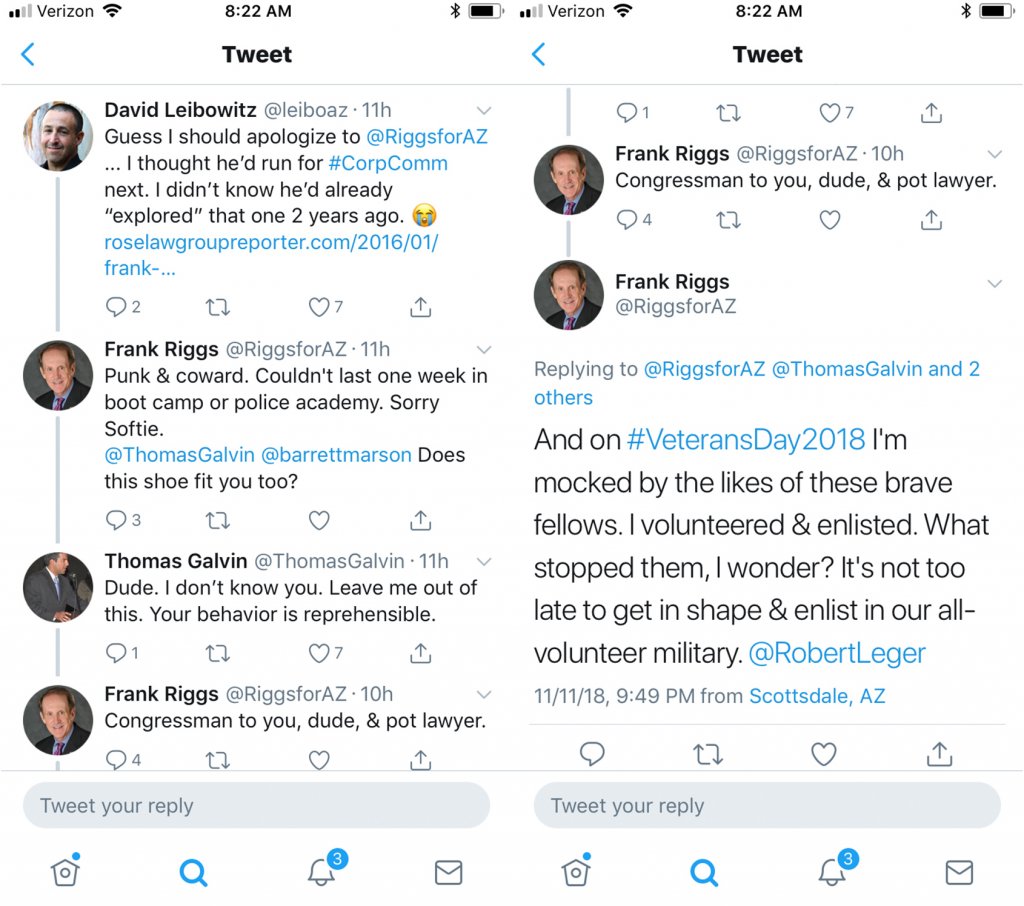 “Dude. I don’t know you. Leave me out of this. Your behavior is reprehensible,” he wrote.

But Galvin got the last laugh Monday morning, after Riggs took down his account to scrub his Twitter meltdown.

Frank Riggs and His Terrible, Horrible, No Good, Very Bad Day on Twitter

‘We have the watch’: Stories from inside NORAD on 9/11 by Emma Athena September 11, 2021
Arizona veterans struggle to get access to health care as… by David Abbott November 5, 2021
Trump’s fake electors: Here’s the full list by Kira Lerner February 1, 2022