Another Arizona school district is asking for state-issued IDs as a requirement for enrollment and potentially shutting out undocumented immigrant families from its classrooms, in violation of state and federal laws.

In a May 9 letter to the Avondale Elementary School District superintendent, the American Civil Liberties Union of Arizona demanded the district “immediately change its unlawful enrollment policy.”

On its website, AESD lists a “valid state/government photo ID” as a requirement for enrollment. 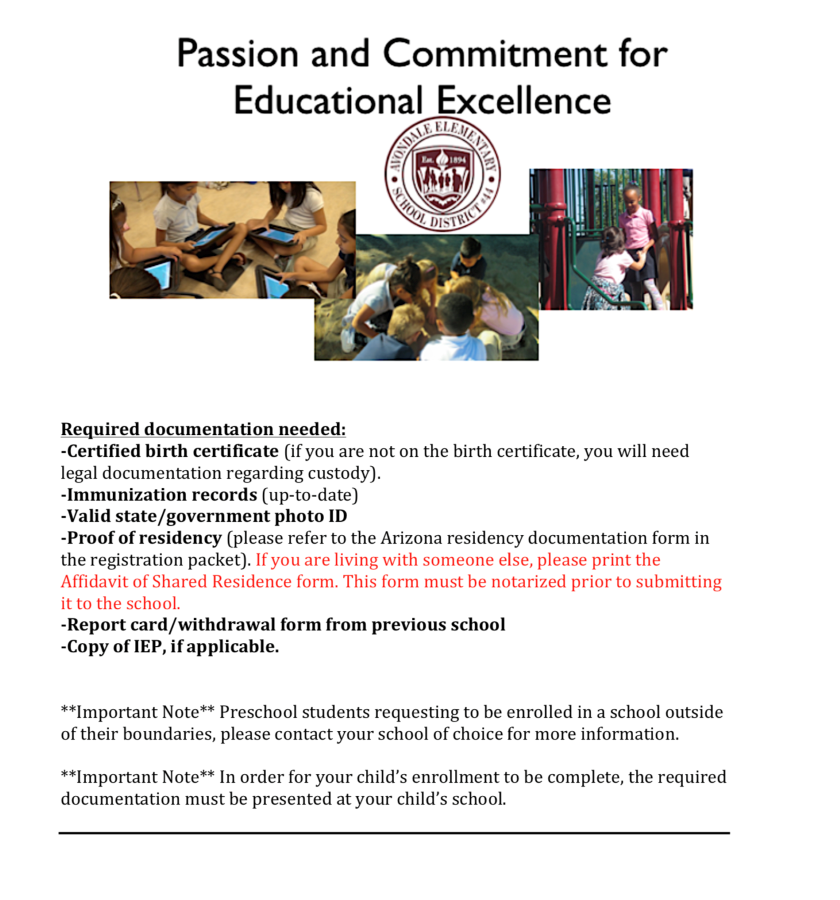 Arizona only issues photo IDs to non-citizens who have an immigration status under federal law, like green card holders, refugees and immigrants with certain visas. Because of this, undocumented immigrant families are targeted by AESD’s enrollment requirement, the ACLU alleges.

All children have a right to an elementary and secondary public education, regardless of immigration status, according to an U.S. Supreme Court decision from 1982.

Arizona school districts are required to gather documents that prove students live within the district’s boundaries. There are over a dozen documents, including utility bills, bank statements, and state-issued IDs, that can be used to meet that requirement, according to Arizona Department of Education guidelines.

The concerns at the Avondale district are similar to ones the ACLU raised in the Yuma Union High School District last month.

In an email to Arizona Mirror, AESD Superintendent Betsy Hargrove said the district is reviewing the allegations made by the ACLU. She didn’t respond to an inquiry on how long AESD has required a government-issued photo ID for enrollment.

Stefan Swiat, spokesman for the Arizona Department of Education, said the office learned of ACLU’s letter to the Avondale district on Monday and “has not had an opportunity to thoroughly review it.”

AESD was one of the districts The Arizona Republic identified as six that are in possible violation of state and federal law for requiring state-issued identifications for enrollment.

The ACLU shed light on an apparently unlawful practice in the Yuma area, where administrators at a YUHSD school require those seeking to enroll a student provide an Arizona identification.

ACLU lawyers claimed the identification requirement is unlawful because it effectively bars some students – particularly children of migrant agricultural workers, homeless youth and those without lawful immigration status – from their right to a free and public education. The ACLU said the enrollment practice was in place at San Luis High School — which is a few miles away from the border with Mexico.

Attorneys for YUHSD told the ACLU in an April 26 letter that, after “conferring with ADE,” the district “will simply require” the documents listed in the ADE guidelines, according to a copy of the letter shared with the Mirror.

YUHSD lawyer C. Benson Hufford said the identification requirement was a district-wide practice at all six high schools, not just San Luis High School. He said the district’s requirements are in line with the law.

“The District’s policies and practices are even-handed and fair to all persons regardless of citizenship or immigration status,” Hufford wrote. “The District sincerely believes that its practices are consistent with the requirement of Arizona.”

YUHSD spokesman Eric Patten said presenting a state-issued ID for enrollment is a practice, not a policy. He declined to say for how long the enrollment requirement has been in place.

The district serves more than 11,000 students, according to the YUHSD website. About a third of its students come from migrant families who work mostly in seasonal agricultural jobs, Patten said.

“The District disagrees with your characterization in your conclusion that it is singling out children whose parents or guardians do not possess driver’s licenses or Arizona identification cards, or who do not have a parent or legal guardian,” Hufford wrote to the ACLU.

When the Mirror requested via email for a document that outlines the practice, Patten, the spokesman, said, there is no such document.

The Mirror has filed a public records requests for enrollment documents from several of YUHSD’s schools. The district hasn’t provided the documents yet.

A San Luis High School parent, who was granted anonymity because of fear of retribution for criticizing the district, shared an enrollment document with the Mirror titled “San Luis High School Incoming Freshman Pre-Registration Procedure.” Under the requirements, it says a picture identification is needed and specifies only an “Arizona driver’s licence or Arizona identification card” as acceptable.

ADE’s Swiat said the department has been discussing the matter with YUHSD.

“ADE officials recently held a conference call where staff members spoke with Yuma’s superintendent and listened to her concerns as school leader dealing with nuanced enrollment scenarios at the border,” Swiat said.

“Arizona law does not provide a mechanism for ADE to enforce laws related to enrollment,” Swiat said.