A line of makeshift bodybags face the state Capitol on Jan. 9, 2022, during a student-led protest of recent anti-LGBTQ sentiment in the legislature. The bags represent the danger of increased student suicides stemming from anti-LGBTQ rhetoric in the statehouse. Photo by Gloria Rebecca Gomez | Arizona Mirror

Across the street from the state Capitol, while lawmakers gathered in advance of the new legislative session, Arizona high school students laid out 180 black body bags in protest.

“We are trying to let our legislators know that every single step they take, bill they vote on, there is a life on the line,” said Dawn Shim, the leader of Support Equality Schools Arizona, which organized the event.

The student-led group was formed last year to speak out against a record slate of anti-LGBTQ bills proposed by the Republican majority. Lawmakers approved several laws singling out LGBTQ students, including one that prohibits trans girls from joining sports teams that fit their gender identity and another that forces teachers to hand over all student records to parents, even if they contain sensitive personal information.

Some of the newest bills filed this year continue the trend, with one of them restricting pronoun use in schools and another seeking to clamp down on drag show performances by taking away state funds from the schools that host them.

“Once we get these kinds of political ideologies in schools that (are) banning us from carrying out activities that affirm us as individuals and people, schools no longer become a safe space where kids are able to thrive and learn as they should,” she said. “Instead, they become a place where they are marginalized and don’t feel safe. That’s something that shouldn’t be happening.”

In September, the group oversaw a mass walkout to denounce anti-LGBTQ laws, and the start of the new legislative session brought them to Wesley Bolin Memorial Park, a street away from the statehouse. Black trash bags, meant to represent body bags, were placed in rows along the lawn, a sobering representation of students who’ve taken their own lives. Chandler School District, where Support Equality Schools Arizona is based, has seen a rise in student suicides.

Sophia Gallo, an 11-year-old who uses “she” and “they” pronouns, worries that new proposals from conservative legislators aimed at tightening pronoun use will only worsen that danger. Senate Bill 1001 prohibits teachers from using pronouns to refer to students that are different from their biological gender, unless parent permission is obtained. Notifying parents, Gallo said, puts those students at risk if their families aren’t supportive.

“It’s not safe for some kids,” she said, frowning.

Gallo’s older brother, Kanix, added that it’s already enough of a struggle to find acceptance at school, without complicating the matter with legislative directives.

“I had a huge struggle this year with a teacher, trying to get her to use my correct pronouns,” he said. “With this bill she can defy my rights to use my preferred pronouns — which damages trans-students’ mental health.” 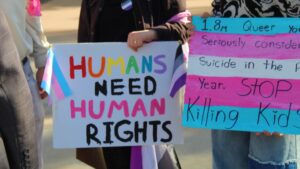 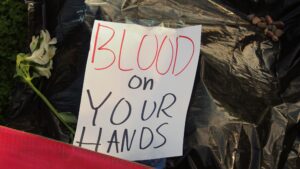 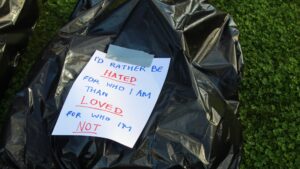 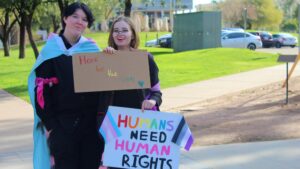 SB1001 includes a provision that protects teachers and school employees who don’t agree with preferred pronoun use from being forced to comply by school administrators.

Rory Earl doesn’t have a very affirming home life. The 18-year-old said his teachers and classmates are where he finds the support he needs.

“School is the main place I get to present myself the way I really want to,” he said. “If I can’t exist how I want to in that community, then what do I really have?”

It’s unlikely that SB1001 or other anti-LGBTQ bills will become law this year: Gov. Katie Hobbs has in the past denounced legislation that targets the LGBTQ community, and has said she intends only to sign new laws that win bipartisan support in the legislature. Still, Shim noted, the proposals are concerning because they create an unwelcoming environment for LGBTQ youth across the state.

“Whether they pass or not is not the problem. It’s the fact that our legislative areas are becoming more and more restrictive, they’re becoming more oppressive, and that’s not something we want as Arizonans for our future,” she said.

Research from the Trevor Project, an LGBTQ advocacy organization, found that the spike in anti-LGBTQ legislation and political rhetoric were among the reasons LGBTQ youth contemplated suicide. Continued hostility from Arizona legislators is unacceptable, Shim said, and the student protest served as a reminder of what the potential consequences can be.

“We just really want to tell our legislators as they are coming in for their first day in office that they need to care,” she said. “There are youth that are dying at the hands of the laws that they’re allowing to be put in place.”

Isabela Gamez is a writer for the Arizona Mirror while serving as the University of Arizona School of Journalism’s Don Bolles Fellow. She is a current junior at the University of Arizona majoring in journalism with a Spanish minor. She previously interned at the Digital Futures Bilingual Broadcast Studio and Arizona Public Media. She is active in the reporting of social justice issues.