‘School should be a safe place,’ but students fear it isn’t now that a series of laws went into effect last week

Dawn Shim, a junior at Hamilton High School, speaks to a crowd gathered after a walkout from the school on Sept. 29. Shim organized the walkout at Hamilton and five other schools in Arizona in protest of anti-LGBTQ legislation recently enacted in the state. Photo by Caitlin Sievers | Arizona Mirror

Hundreds of Arizona high school students walked out of their schools into the glaring afternoon sun on Thursday to protest the record number of anti-LGBTQ bills passed by the GOP-controlled state Legislature this year.

“Dear (Gov. Doug) Ducey and Arizona representatives, these bills are killing us,” walkout organizer Dawn Shim told a crowd of students at Hamilton High School in Chandler. “They are killing our peers. We do not need any more students hurt by your actions. We aren’t out here missing our school day and interrupting our education because we want to. We have been forced into it.”

Shim, a 16-year-old junior at Hamilton, founded the organization that mobilized students across the half a dozen schools less than six months ago, after reading about legislation targeting transgender minors in the state that lawmakers were considering.

That group, Chandler-based Support Equality Arizona Schools, is made up of 10 core students, but has supporters in Gilbert, Tucson and Flagstaff. Its mission is to advocate for equity, with a focus on minority and LGBTQ+ students. The initiative fills a gap for high schoolers who can’t make their voices heard at the ballot box yet.

“Across America, more and more anti-LGBTQ legislation is being passed by the people sworn in to protect us,” Shim said. “We also have a burgeoning mental health crisis among young teens. These two factors are not coincidental. The Trevor Project finds that, in 2022, almost 45% of LGBTQ youth considered suicide in the last year.”

Support Equality Arizona Schools has met with legislators, attended city council meetings and reached out to school board members — all with the goal of securing a promise that anti-LGBTQ legislation won’t be enacted at schools. 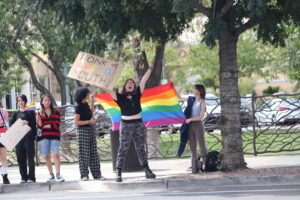 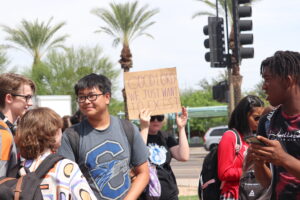 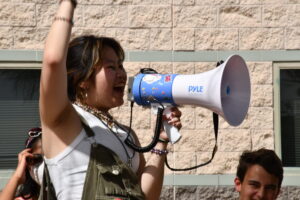 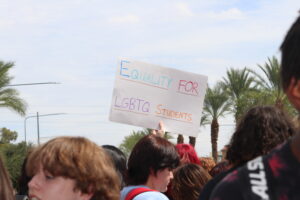 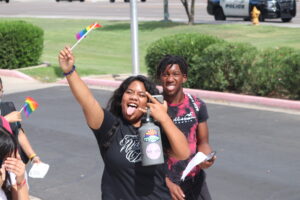 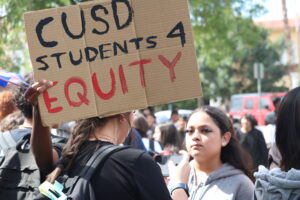 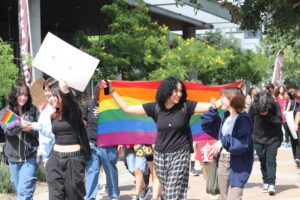 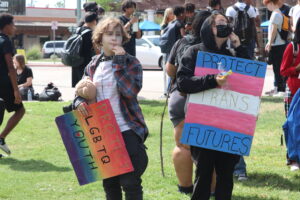 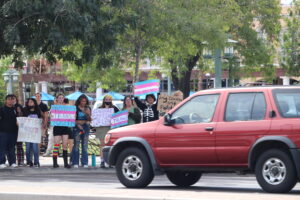 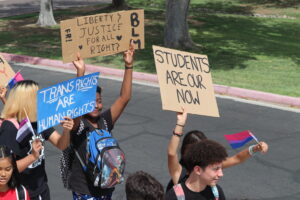 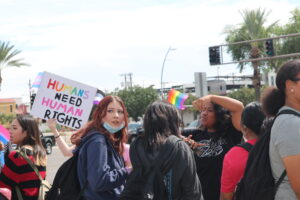 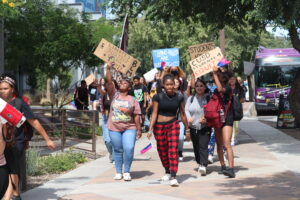 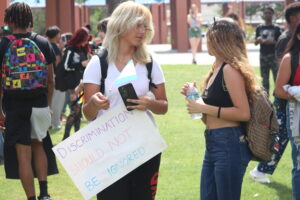 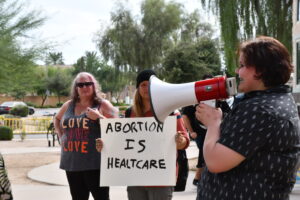 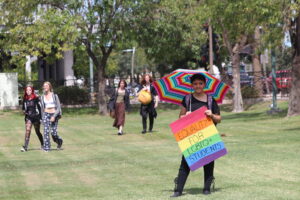 All of the laws signed into law earlier this year went into effect Saturday. Several of them are set to have far-reaching consequences for LGBTQ and trans youth across the state. One bars trans students from joining girls sports teams and another prohibits trans minors from obtaining gender-affirming surgery.

Other laws target schools, including one that forces schools to hand over all student records to parents, even if they contain sensitive personal information, and another that bans sexually explicit materials, which is already leading to the removal of LGBTQ books. At Glendale Union High School District, schools have been instructed to remove books that may conflict with the new law, among them titles such as Gender Queer by Maia Kobabe and The Bluest Eye by Toni Morrison.

It is embarrassing that we live in a state and a country where people are at risk simply for being who they are and loving who they want.

Kanix Gallow, 14, is one of the core group of 10 that form the Support Equality Arizona Schools initiative. He hopes the walkouts will make clear to both legislators and school officials that Arizona students don’t support anti-LGBTQ measures.

Gallow is concerned about the effect the laws will have on students’ mental health, and pointed out that suicide rates are already high enough among LGBTQ youth without adding hurtful rhetoric on top of that.

“We just want our students safe and accepted in our schools. We don’t want to lose anyone else,” he said.

At Chandler High School, around 200 students made the trek two blocks down to Dr. A.J. Chandler Park, where they gathered in the small grassy area to listen to speakers and wave handmade posters at passing cars. Across town at Hamilton High School, a group of students gathered in the shade of a tree outside of Hamilton Library, which adjoins the school, to share their anger, passion and fears about the new laws and the general treatment of LGBTQ students.

“It is embarrassing that we live in a state and a country where people are at risk simply for being who they are and loving who they want,” said Blues Patrick, a senior at Hamilton High school.

Khye Jackson, a junior at Hamilton, said he was there to support his LGBTQ classmates.

“Love is love,” Jackson said. “All these people out here are family to me. We all go to the same school.”

Ace Yates, a 14-year-old who joined the march at Chandler High, spoke hesitatingly into a portable speaker, sharing how difficult being trans was at home. His mother claims to be accepting, but refuses to use the correct pronouns. Listeners in the crowd booed.

Fortunately, Yates said, his mother isn’t hostile to his gender identity — just negligent. It’s frustrating, but other trans kids deal with dangerous home lives: parents that could quickly turn abusive if they’re outed, as is now a possibility with a new law passed earlier this year that forces schools to turn over confidential student records to parents upon request.

“School should be a safe place. Teachers are often the only people students with homophobic parents can talk to, and this law shatters that,” Yates said.

Jay Nash, who is also trans, has firsthand experience with keeping sensitive information away from unwelcoming relatives. He has to hide his identity from several family members.

“I have to stay hidden half of the time. It sucks,” he said.

I am really angry — all the time. But I want to be able to do something with that anger. I don’t want to just stand up here and say there will be change without being the one to put my feet on the ground and do something about it.

On top of facing scrutiny at home, Nash has to deal with hurtful rhetoric from GOP state legislators. It’s disheartening to hear elected officials dissect his identity and pass restrictive laws, he said.

“I like having rights,” he said with a chagrined laugh.

Yana Artuz, 14, waved a miniature bisexual pride flag back and forth. She said she heard about anti-LGBTQ legislation and felt compelled to join the march, despite not being directly affected by the laws being passed. The work to bring awareness to injustices, she said, is the responsibility of everyone, regardless of sexuality.

“If nobody comes out and talks, nothings going to happen,” she said.

At Hamilton High, the importance of organizing as a community was equally highlighted.

Raj-Sankar added that the fight for equality sometimes feels hopeless.

“Yeah, I’m angry,” she said. “I am really angry — all the time. But I want to be able to do something with that anger. I don’t want to just stand up here and say there will be change without being the one to put my feet on the ground and do something about it.”