‘Where is the justice?’: Indigenous families plead for help combatting violence

Isaiah Meza stands near his family at the state Capitol on May 5, 2022, during speeches made for National Missing and Murdered Indigenous Persons Day. The 6-year-old had a red hand painted over his mouth, a symbol of solidarity with missing and murdered indigenous women and girls. Photo by Gloria Gomez | Arizona Mirror/University of Arizona

Odelia Jose should be enjoying her retirement surrounded by family. Instead, the 58-year-old member of the Gila River tribe is in a state of constant grief after losing two of her three children to violence — a tragically common story among indigenous people in Arizona, which ranks third in the nation for missing and murdered indigenous women and girls.

The system didn’t give her the closure she needed, either. The man that shot her daughter was handed a three-year prison sentence after the trial was remanded to tribal court.

“He can still live, breathe. He has his freedom, and we don’t have her,” she said. “Where is the justice?”

Only four years later, Jose’s son was brutally murdered and buried near the San Tan Mountains. That was in 2018, and his case remains unsolved.

Both left behind young children, who keep Jose going. While she limits her crying sessions to showers to avoid making them sad, it’s difficult to see them grow up without their parents, she said. Her granddaughter, Anaya, is turning 15 this month, and she’ll be celebrating her quinceañera without a key person.

“All these milestones,” said Jose, crying. “But mom won’t be there.”

Jose joined more than 200 people like her — family members of indigenous victims — at the State Capitol on Thursday afternoon to grieve and call attention to the ongoing violence their communities face.

Printed on the back of Melissa Begay’s red t-shirt is a picture of her sister, Tammy, head tilted as she smiled at the camera. The 23-year-old’s life was cut short last year by her boyfriend. For the Begay family, joining the event was an important way to keep her memory alive.

“We’re here because we want to tell people she still exists. We didn’t forget about her,” Melissa said.

In those statistics, these numbers had names. They had dreams, aspirations and goals. These numbers are personal and they need to be resolved.

Kate Fox, director of the Research on Violent Victimization Lab at Arizona State University, said that violence against indigenous people in Arizona has been steadily increasing over the last 40 years, with no end in sight. According to her team’s analyses, as many as 633 indigenous Arizonans were killed in that timespan.

The Research on Violent Victimization Lab helped put together the first official state report on missing and murdered indigenous women and girls, which found serious deficiencies in how crime against Native women and girls is addressed.

For some, the struggle to get justice propelled them into activism. Katrina Yazzie and Raymond Meza started community outreach group “Stand Strong Together,” which organizes marches to raise awareness, after losing loved ones of their own. The two traveled more than two hours with their families from Parker, near the state’s western border, to the Capitol.

Yazzie’s sister, nicknamed Shaggy, was murdered in 2017, but the Yazzie family has yet to recieve a police report. In fact, when Yazzie tried to file a missing persons report, she was met with apathetic officials who dismissed her concern and speculated that Shaggy simply didn’t want to be found. Yazzie and her three other sisters and a brother-in-law organized search parties for three weeks, before Shaggy was discovered in a field.

Since then, the case has stalled as the acting chief of police and federal investigator involved both left, though Yazzie suspects the community knows what happened.

“This wasn’t fair for her. Nobody deserves to die like that. People shouldn’t be getting away with murdering other people,” she said. 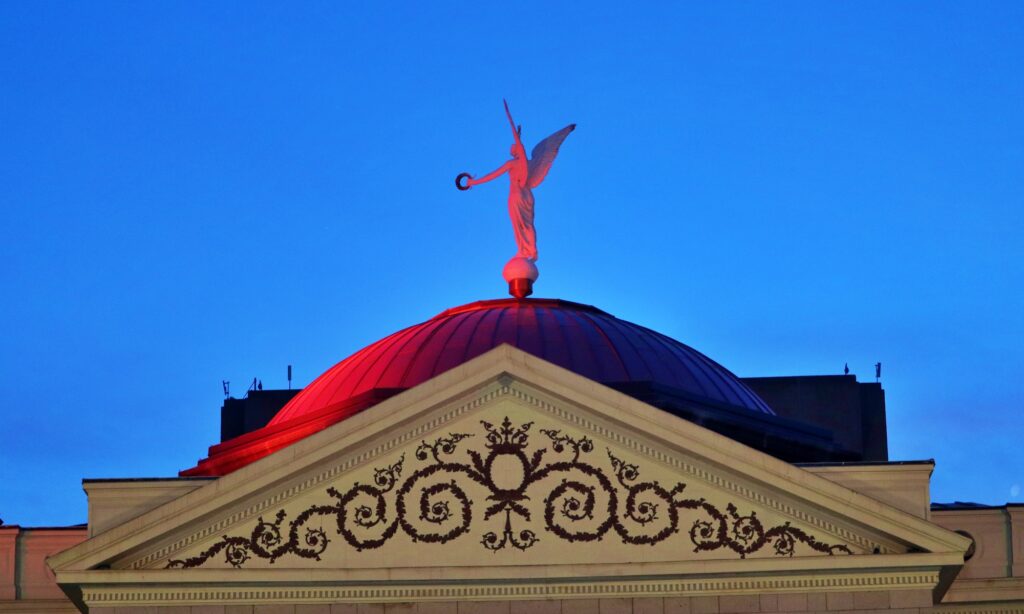 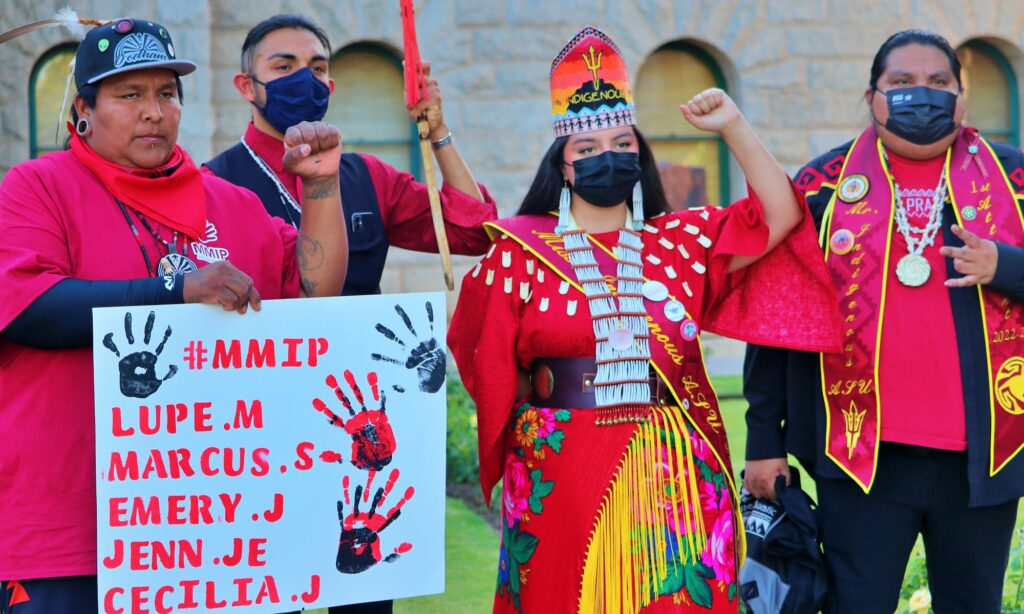 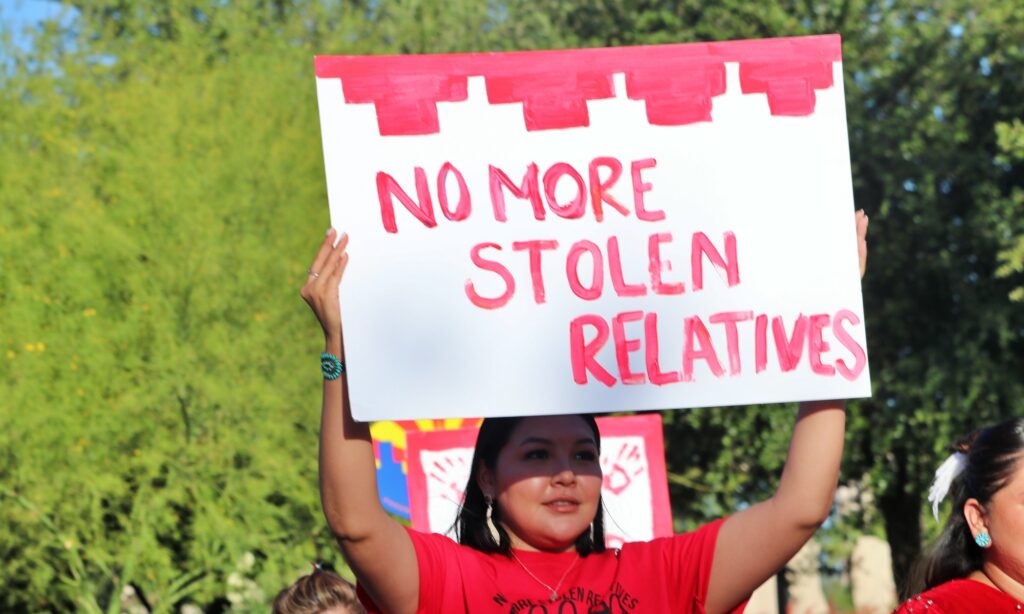 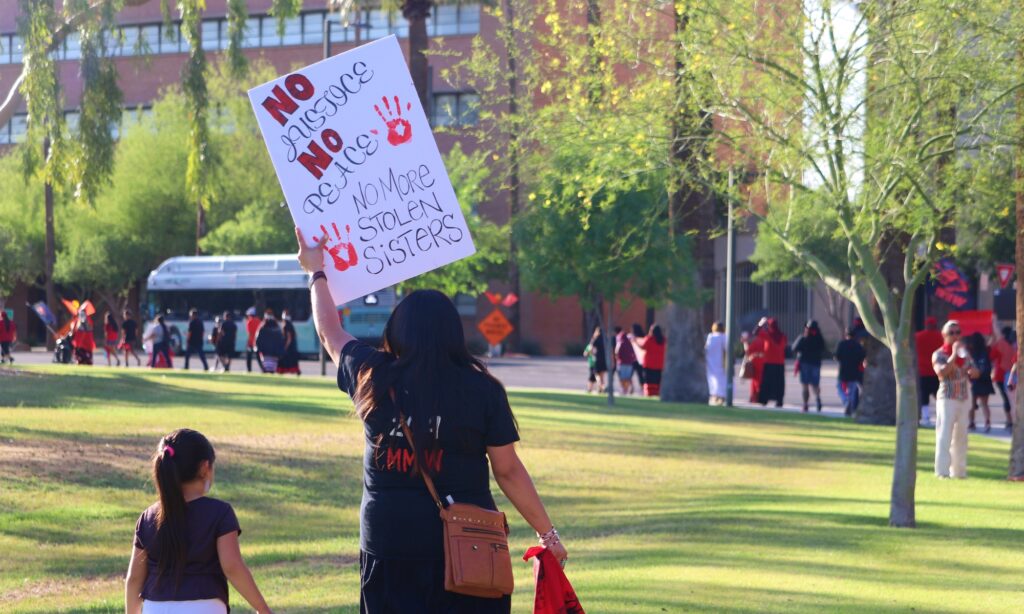 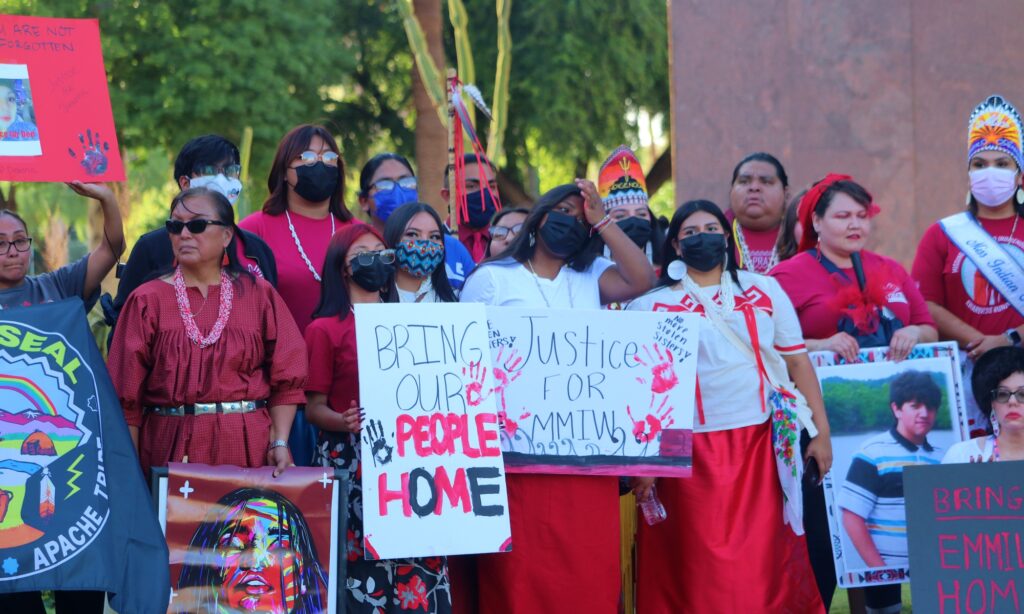 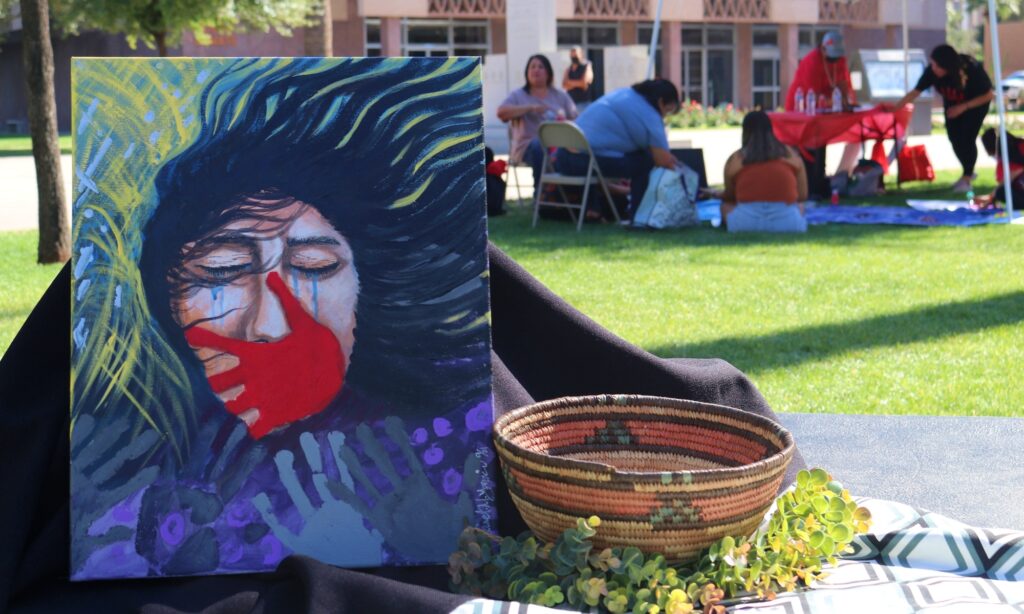 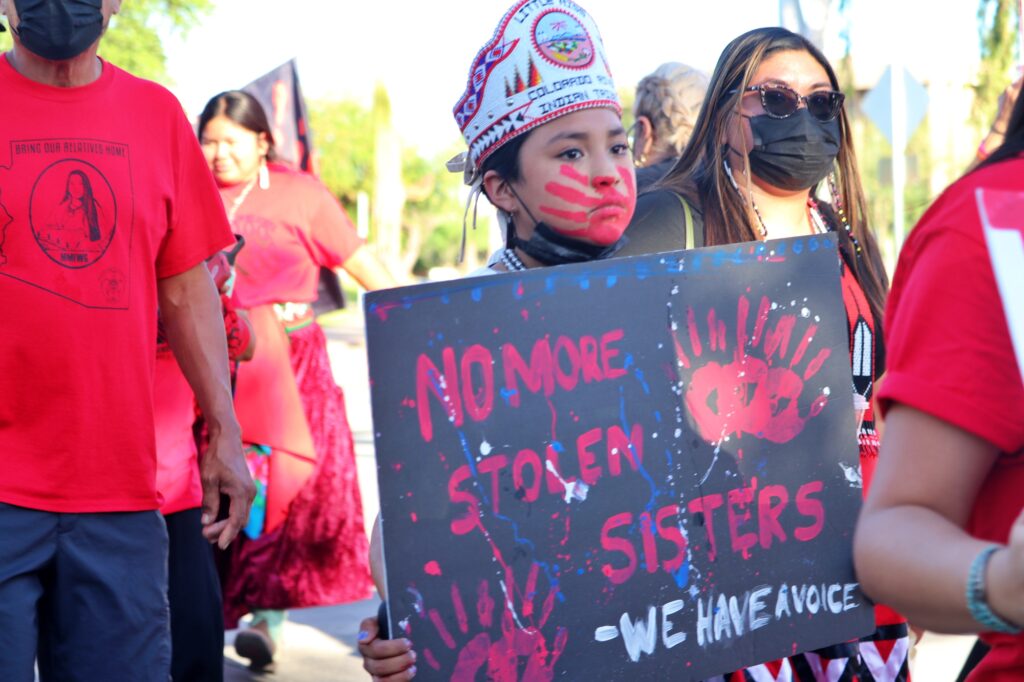 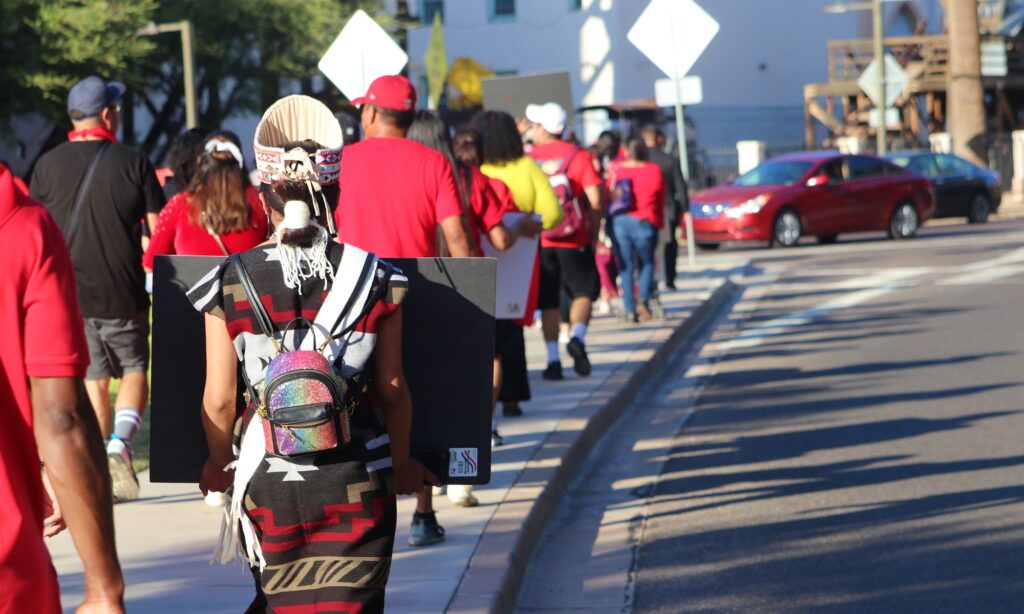 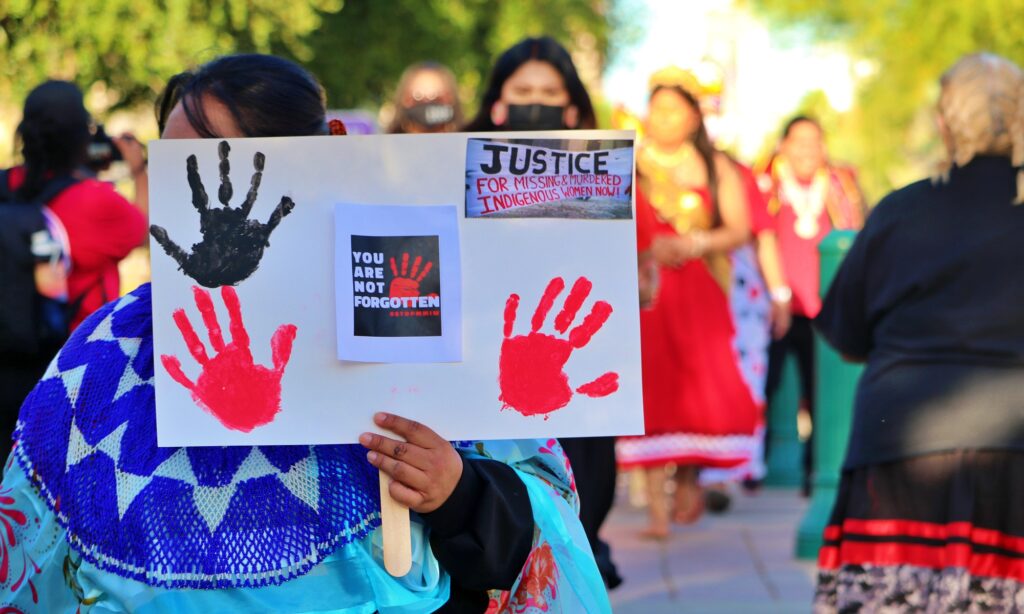 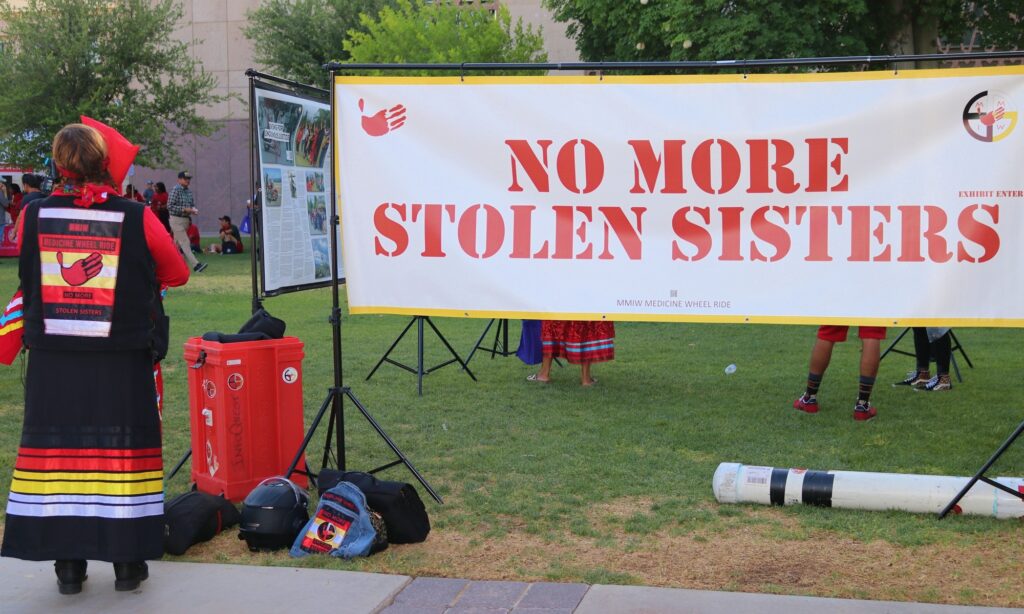 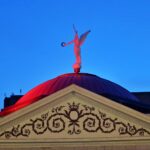 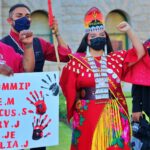 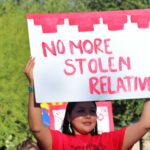 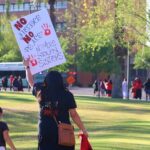 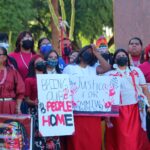 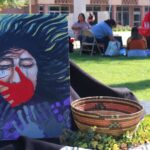 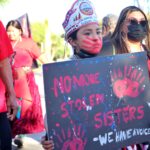 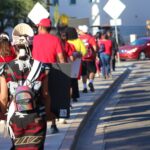 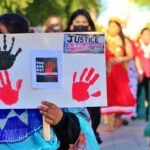 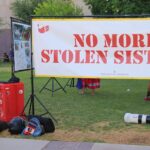 Meza’s family has been touched by violence more than once. His sister, Cynthia Williams, was kidnapped and murdered, leaving behind young children. Last December, a cousin of his was murdered, and the criminal proceedings have left him frustrated. The suspect was given a $4,000 bond by tribal court. The system, Meza said, is corrupt and needs to be called out by community members who have suffered injustice.

“By us speaking out, they feel the dirtiness of what they’re doing,” he said. “It’s like fighting cancer — we’re like chemo. We’ve got to stay on them.”

That call to action was present as the crowd marched around nearby Wesley Bolin Memorial Park, across from the Capitol. Participants held up posters with red hand imagery and pictures of their loved ones, chanting “No more stolen sisters!” and “No justice, no peace!” One marcher burned sage at the front of the line, and another pushed her infant daughter, who would never meet her murdered aunt, along in a stroller.

‘These numbers are personal’

Afterwards, the group returned to rest on the lawn outside the state House of Representatives, in anticipation of presentations from community leaders and legislators.

U.S. Rep. Greg Stanton committed to take their concerns to Congress, which has only recently begun to study the matter.

“We have work to do to raise the profile of this cause and to deliver justice to families,” he said.

Stanton vowed to use his position on the U.S. House Judiciary Committee to raise awareness of that crisis.

Some in the crowd were unimpressed, however. One woman called out asking that he commit to protecting Oak Flat, sacred Apache land being slated for a mining project just east of Phoenix.

“Protecting land directly relates to making sure our relatives are home! That is a direct correlation!” she yelled, to applause.

Stanton paused but didn’t respond, moving on to tout the gains made in reauthorizing the Violence Against Women Act, which offers federal protections for victims of domestic and sexual violence; Savanna’s Act, that improves data collection in cases of missing and murdered Native women, and the Not Invisible Act which increases intergovernmental coordination to address the disconnect between tribal and federal authorities.

State Rep. Jennifer Jermaine, D-Chandler, was honored for work passing legislation in 2019 to set up the study commission investigating the murders of indigenous women and girls. Jermaine, who is Ojibwe, shared that the lack of justice for Native Americans hits particularly close to home for her, because she lost her own great-grandfather — whose body wasn’t found until 71 years after he went missing.

“We are focused on fixing the systems and structures that allow our people to fall through the cracks and to not get the proper attention that they deserve,” she said.

Amelia Flores, chairwoman of the Colorado River Indian Tribe, denounced the continued violence against Native Americans, saying it’s past time for the government to take more direct action. Natives, she said, are vastly outnumbered by non-natives, but the geographical segregation and isolation of reservations and lax enforcement of laws have led to a disproportionately high number of crimes.

“In those statistics, these numbers had names. They had dreams, aspirations and goals,” she said. “These numbers are personal and they need to be resolved.”

As the sun set and the speakers ended their remarks, the lights on the Capitol dome glowed red in recognition of the day. The crowds moved towards the plaza, underneath the domed Capitol museum building to take part in one last event.

Michael Enis held his infant daughter over his shoulder and joined a group of O’odham men in a circle to sing in their native language, shaking gourd rattles in tandem with each other. Lines of men and women linked hands and danced around them and throughout the plaza in long, winding patterns.

“We all shared our different songs: about the world, animals, plants,” explained Enis. “It was a celebration.”

***CORRECTION: An earlier version of this story incorrection stated that state Rep. Jennifer Jermaine lost her grandfather to violence and his body wasn’t discovered until 12 years after he went missing. In fact, it was her great-grandfather and his remains were missing for 71 years. The story has been updated to reflect that.

‘Where is the justice?’: Indigenous families plead for help combatting violence

Gloria Gomez is a senior at the University of Arizona and the 2022 UA School of Journalism’s Don Bolles Fellow. Gomez has interned at the Arizona Daily Star and worked at the Arizona Daily Wildcat. She is a dual major in journalism and political science, with a Spanish minor. She’s a member of the Investigative Reporters and Editors and National Association of Hispanic Journalists. The UA School of Journalism started the fellowship in 1977 to honor Don Bolles, an Arizona Republic reporter killed in a 1976 car bombing.