Sen. Warren Petersen is currently offering a home in Gilbert for rent on Airbnb

Gilbert Republican Sen. Warren Petersen wants the attorney general to investigate an ordinance passed by Paradise Valley that regulates short-term home rentals, which he says violates state law, while the lawmaker himself owns a million-dollar luxury Airbnb listing in Gilbert.

If Petersen’s complaint is successful in striking down the Paradise Valley ordinance, it would effectively block other cities and municipalities from pursuing other similar ordinances, including in Gilbert, where Petersen’s Airbnb is located.

Petersen’s listing, discovered by Arizona Mirror, goes for $557 a night and can sleep up to nine people, according to the listing by “Warren” along with a photo of the senator.

In a text message to the Mirror, Petersen said he doesn’t believe it’s a conflict of interest to own an Airbnb while also filing a complaint with the Attorney General’s Office regarding regulations of short-term rentals. He emphasized his belief that Paradise Valley is violating state law with its regulations. 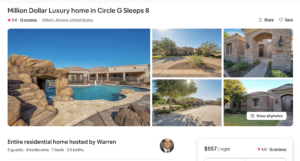 Petersen filed the complaint against Paradise Valley over an ordinance the town passed earlier this year to rein in so-called “party houses.” The company Airbnb was a major player in the pushback against the ordinance.

The challenge is known as an SB1487 complaint, named after a 2016 law that permits any legislator to ask the attorney general to review an action by any municipality or county if they believe that action violates state law. If the attorney general finds a violation, the offending law must be repealed or the violator loses the money it receives from state income tax revenues, which, for Paradise Valley, would be about $1.6 million, according to the League of Arizona Cities and Towns.

Peterson said he didn’t intend to operate the house as a vacation rental for the long term.

“Furthermore I listed about a month ago as a regular rental. Likely not going to be a vacation rental sometime within the next six months,” Petersen said to the Mirror, adding, “None of us should be okay when the cities break the law.”

Petersen has argued that the Paradise Valley ordinance passed in late January goes beyond what’s permitted by a state law passed in 2016 that restricts municipalities’ ability to regulate short-term rentals within their borders.

In 2016, the Arizona legislature passed a bill that prohibited municipalities from enacting regulations on STRs except in specific circumstances. It was touted by Gov. Doug Ducey and other lawmakers at the time as boosting the short-term rental market, though Ducey has said since that lawmakers will “revisit” short-term rental regulations after a string of complaints from cities and towns that find themselves with no way to go after bad actors.

The ordinance requires property owners to be on site for certain events, meet their guests within one hour of them arriving at the property, do a background check on every guest, provide the owner’s name and contact information to the town, install a landline telephone, prove that the guest has acknowledged the rules and regulations set by the town, clean the air filters every three months and more.

Petersen contends that the ordinance violates that law because it imposes different requirements on specific short-term rentals, has new “significant” obligations for them and “​​increases regulatory burdens on businesses by subjecting platforms to new liability and disclosure requirements in violation of state and federal law.”

When asked if owning such a large Airbnb property could be seen as a conflict due to his property possibly being affected by a ruling, Petersen dismissed such concerns.

“I don’t think Gilbert would break the law,” Petersen said.

Petersen’s Airbnb is well reviewed by those who have stayed there.

“The backyard was so fun and everyone loved the water slide,” Juliet wrote, adding “Warren was great at communicating and the house was very clean!”

The 4,000-square-foot, four-bedroom, three-and-a-half-bathroom home doesn’t allow for parties, pets or smoking, but does include a three-car garage, rock-climbing wall, trampoline and heated pool.