Ellamae Begay was last seen at her home in Sweetwater, Arizona on June 15. Her family is determined to find out what happened to her. Photo via Trailing Ellamae/Facebook

Ella Mae Begay prepared the materials for another loom to weave a rug in her pictorial style.

Her family said she didn’t usually talk much about what she planned to make — save for the commission where people asked her for a rodeo scene or a classic truck in front of red hills. They often didn’t see her image until the sun came up after a late night where her imagination and voice wove together in a quiet pattern.

“When they start weaving a rug there’s no template. This is just all in their head,” said Begay’s niece Seraphine Warren. “Her work is a constant search for the best way to interpret the ideas that she has about herself and the world she lives in.”

The loom and wool remained unused for at least five months. That’s how long Begay has been missing. She was last seen at her home in Sweetwater, on the Navajo Nation, on June 15. The FBI is the lead law enforcement agency investigating and suspects foul play was involved in her disappearance.

Begay is so much more than a face on a missing poster. That’s evident by the family committed to getting her justice, as well as the craft she mastered that hangs on the walls, often by people she doesn’t know who love her work, who are also wondering about her safety.

Redmond Smith sold several of Begay’s rugs from the shop Malouf on the Plaza, a high-end gallery with a commanding presence, consuming almost an entire corner block of the historic Santa Fe Plaza.

“I didn’t know she was missing,” he said. “I was pretty shocked. Because you hear about people going missing quite a bit, you know, across the country. But this really didn’t make headlines like I thought it should have. She just deserved more attention.”

Customers walking in from the entrance off Old Santa Fe Trail are greeted by a room filled with Navajo rugs from floor to ceiling, covering every inch of the store’s walls. Begay’s rugs lived here until they were purchased by people from across the globe. 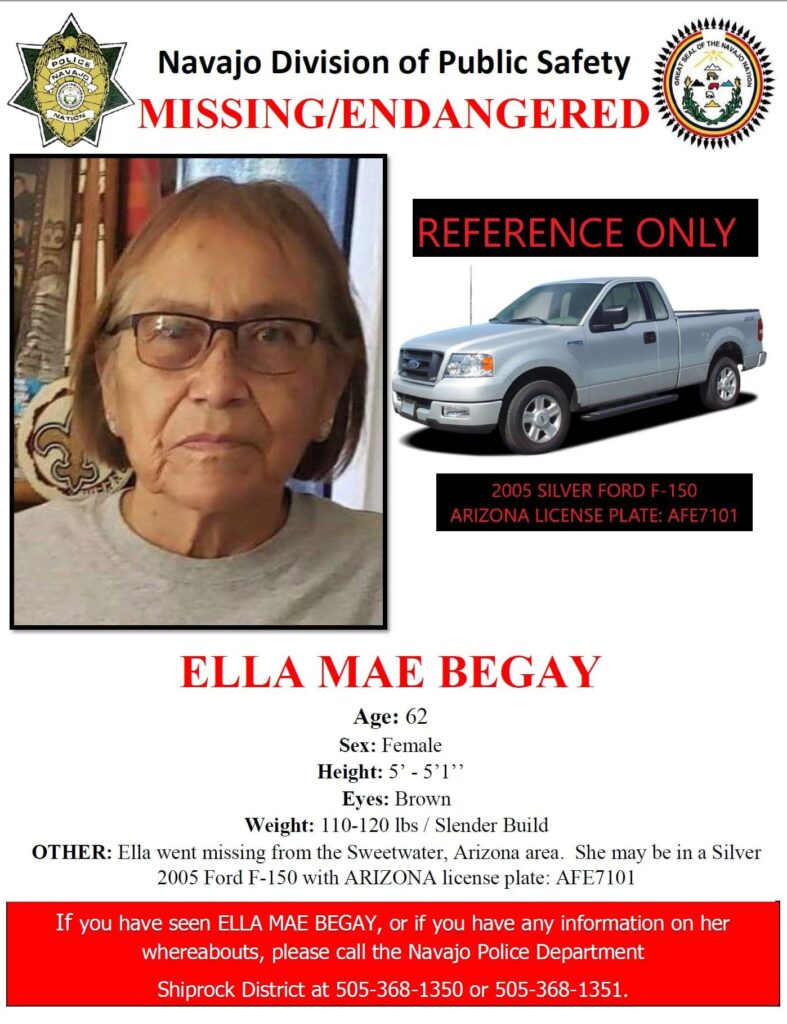 “I think people would see her weavings, and it was just a day in the life of a Navajo,” Smith said. “Seeing how lively and fun and beautiful her weavings are, you know there was no other way that this lady couldn’t be but an exceptional human being.”

This store is where Darlene Gomez, a lawyer assisting Begay’s family with the search, found three rugs.

Gomez was in Santa Fe with her friend Michelle Denson and Renee Lewis — a legal-aid-turned-lawyer at the firm. They were there to pick up Lewis’ license to practice law.

What happened that afternoon profoundly influenced how she will practice law, she said, as she continues working with families like Begay’s.

Denson wanted to check out a rug she was considering purchasing. Gomez said she started chatting with Smith, eventually bringing up the work she is doing to help find Ella Mae Begay — and a lightbulb went off.

He had three of her rugs in his shop.

Denson, the attorney’s friend who was also in the store that day, said the experience was emotional.

“I just felt like there was a reason why I felt that I really wanted to show them this other rug,” she said. “I saw it as a message that she was possibly letting us know to keep searching for her. She’s still here.”

Gomez took it as a sign and tried to figure out a way to pay for at least one rug.

“She’s telling her story through art,” Gomez said. “And then when we saw that, it was definitely like, for me. It was a sign, ‘keep looking for me. Keep doing what you’re doing. I’m still here.’” 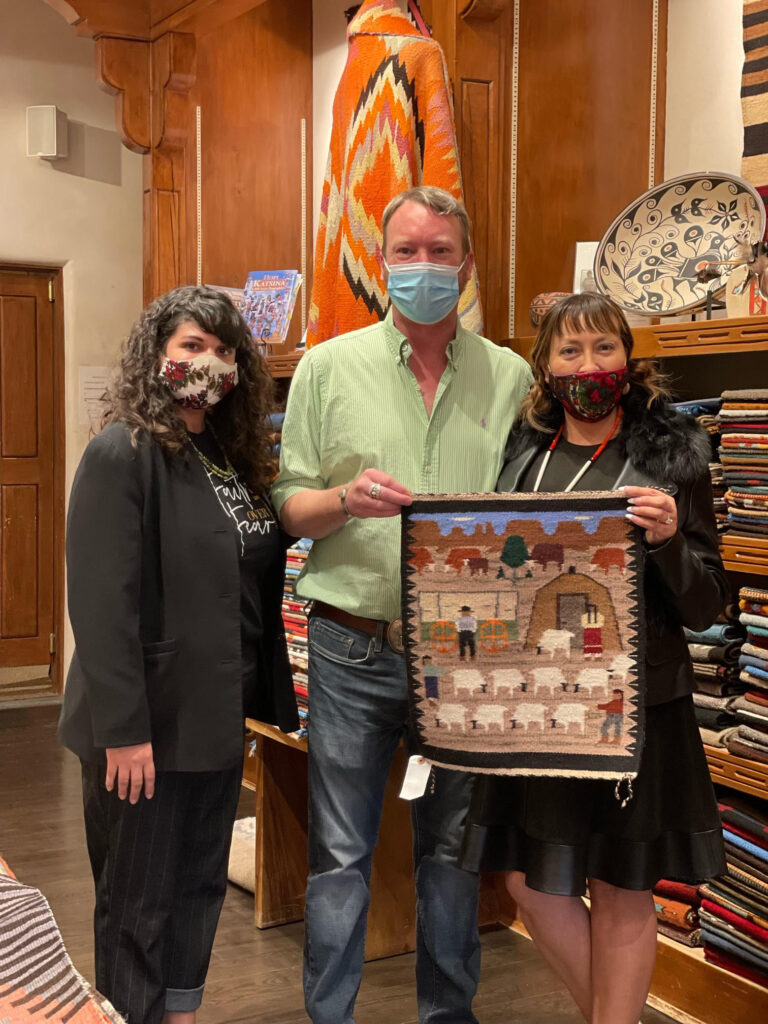 ven pulled out her wallet, the owner at Malouf’s had an offer. “She gave us the rug, sold it to us for a penny, and she was sincere,” Gomez said.

The family was also ecstatic at the news, and also the significance of the moment sparked by Begay’s creativity.

“I cried because of the message that was attached to it,” said Warren, Begay’s niece. “I believe this would be a sign that we would find her. It’s just amazing.”

Gomez is getting the rug framed and plans to bring it to rallies or events so Ella Mae can be present through the craft she loved. “This rug is telling us something, it’s telling us that we need to keep looking,” she said, “and it’s kind of what we all thought in our own mind.”.

She’s also crowdsourcing money to purchase the other two rugs at Malouf’s. Her team feels renewed and ready to keep going, she said.

Meanwhile, the loom and materials Begay gathered before her disappearance are in the hands of her sister, Warren’s mom. She’s waiting for inspiration to start the process of weaving another rug on a loom that’s bigger than the one she normally uses, Warren explained.

“It’s going to be really hard on my mom to start that rug. And it’s probably going to be very emotional,” Warren said. “I think she really wants to put in some thought in what she wants to put on there.”

This story was first published by SourceNM, a sister publication of the Arizona Mirror and a member of the States Newsroom network of local news sites.

Shaun Griswold is a reporter for SourceNM based in Albuquerque. He is a citizen of the Pueblo of Laguna, and grew up in Albuquerque and Gallup. He brings a decade of print and broadcast news experience. Most recently he covered Indigenous affairs with New Mexico In Depth. Shaun reports on issues important to Native Americans in urban and tribal communities throughout the state, including education and child welfare.