Members of the Arizona Independent Redistricting Commission hear public testimony during a hearing at the Mesa Convention Center on Aug. 9, 2021. Photo by Jeremy Duda | Arizona Mirror

A congressional district that was among the most controversial flashpoints of the last redistricting process a decade ago may be largely recreated with little dispute.

The Arizona Redistricting Commission proposed a host of major changes as it adjusted the latest iterations of its congressional and legislative districts at a day-long meeting at the Sheraton Phoenix Crescent hotel in Phoenix on Friday. Among those proposals was the broad outline of the new 4th Congressional District.

The version of the district that’s currently on the commission’s draft congressional map encompasses Ahwatukee and most of the area to the east within the Loop 202, besides eastern Mesa, including much of Chandler, Gilbert and Tempe.

Democratic Commissioner Shereen Lerner proposed that CD4 expand to take in the remainder of Tempe, south Scottsdale, the Arcadia and Biltmore areas of Phoenix and the Salt River Pima-Maricopa Indian Community. She suggested using Gilbert Road as the dividing line between CD4 and its neighbor to the east, which would move the district’s eastern boundary, currently set at Greenfield Road, several miles to the west.

The hypothetical CD4 would largely be an analog to the current 9th Congressional District. The crescent-shaped district includes Ahwatukee, western Chander, western Mesa, Tempe, parts of south Scottsdale, and through the Biltmore and Arcadia neighborhoods of Phoenix, ending in the Sunnyslope area in the northern part of the city.

Erika Neuberg, the commission’s independent chairwoman, said she doesn’t want to recreate the northern end of the district, saying the “tentacles” of  CD9 are “a little illogical.” But she was intrigued by the notion of keeping the other portions of the current district together.

“It does tap into, I think, an interesting hub of communities that are quite competitive. I think many communities of interest are served well in that area. But I’d like to try to make it more compact and contiguous than the last iteration,” Neuberg said. 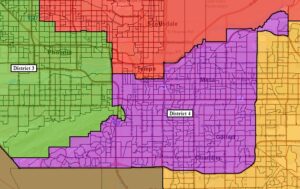 Republican Commissioner Doug York also expressed approval of the proposed CD4 lines. He suggested that Ahwatukee could go into the neighboring, East Valley-based 5th District, though Lerner and mapping consultant Doug Johnson noted that Ahwatukee is currently part of CD9.

Ten years ago, the creation of the current CD9 was a source of discord between Democrats and Republicans. Democrats had long sought a new competitive or left-leaning congressional district in the Phoenix area, while many Republicans viewed the district with suspicion. The AIRC’s two Democrats and its independent chair routinely voted 3-2 against the commission’s two Republicans, and the GOP largely viewed CD9 as the majority bloc’s primary goal.

Though it was initially labeled as a competitive district, it became solidly Democratic as the decade wore on. In its first election in 2012, the district sent Democrat Kyrsten Sinema to Congress, paving the way for her to eventually become the first Democratic U.S. senator elected from Arizona in 30 years. Democrat Greg Stanton notched a 23-point win in the district in his 2020 re-election.

The proposed changes to CD4 would lop off sizable chunks of Chandler, Gilbert and Mesa, and move them into the new CD5. The East Valley district, which would likely be solidly Republican, would include east Mesa, most of Gilbert, parts of Chandler, along with adjoining areas on the edge of the Phoenix metro like Gold Canyon, Queen Creek and San Tan Valley, Lerner proposed.

Elsewhere in the Phoenix area, the Arizona Latino Coalition for Fair Redistricting submitted a proposed map for the 3rd Congressional District. The proposal, which would be one of two majority-minority districts drawn to comply with the Voting Rights Act, would include south, downtown and part of western Phoenix, along with part of southern Glendale. The commission’s consultants incorporated the coalition’s proposal into its congressional map.

In the West Valley, York reiterated his interest in pulling Buckeye, Goodyear and other communities along Interstate 10 out of the southern Arizona-based 7th District, which runs from Tucson to Yuma along the Mexican border, and juts into the western Phoenix area. Those boundaries are similar to the pre-existing district it would replace.

York questioned why the West Valley should be part of a congressional district with much of Yuma.

“From a community of interest standpoint, there’s no commonality there at all,” he said.

The commissioners began their day discussing the fate of northern Arizona. They reached no consensus on how to handle northern Arizona in either the congressional or legislative maps, but put several ideas forward that their mapping consultants will plot out for them to consider next week.

On the legislative map, Republican Commissioner David Mehl proposed keeping the entire city of Flagstaff in the predominantly tribal District 6, rather than splitting it up with the majority in the district directly to the south, as it is on the current draft map. To make up for the population it would lose by giving up Flagstaff, District 7, which includes parts of Coconino, Navajo and Yavapai Counties, would extend east to take in Eagar and Springerville and south into Payson under Mehl’s proposal.

Mehl also suggested taking the Verde Valley out of District 7 and joining it with the bulk of Yavapai County in a district to the west. He noted that Verde Valley residents were divided on whether they wanted to be in a district with Prescott, but said public opinion was more uniform on the other matters. The plan would also give the AIRC an opportunity to pull the “copper corridor” region and the non-tribal areas of the White Mountains out of District 6, as Mehl said residents there wanted.

While Neuberg was supportive of Mehl’s proposal, two of their colleagues had concerns.

Democratic Commissioner Derrick Watchman, a member of the Navajo Nation, worried that tribal voting power would drop under Mehl’s proposal. He said Navajo Nation leadership wanted to ensure that Native Americans made up at least 60% of the district.

Neuberg emphasized that the district was being drawn to represent Arizona’s northern tribes, “and that is of critical importance.”

And Lerner wasn’t confident that Mehl’s proposed changes respected the wishes of residents in the affected areas, particularly in the Verde Valley, which she wanted to keep in District 7. Lerner also worried that District 7 would become less competitive under Mehl’s plan. The district as it’s drawn now is Republican-leaning but competitive, based on the metrics the AIRC adopted to measure partisan performance.

Things didn’t get any easier on the congressional map, where Lerner and Mehl again put forward differing ideas.

Unlike on the legislative side, the proposed 2nd Congressional District won’t be predominantly Democratic, and unlike its predecessor district, will almost certainly be Republican leaning. Exactly how far the district, which would include the Navajo and other northern tribes, leans to the right may depend on which areas are severed and added to its boundaries.

Mehl reiterated his previous desire to see the southern boundary of CD2 moved north, which he proposed to accomplish by lopping off eastern Pinal County. To make up for the population loss, he suggested adding heavily Republican Mohave County

The commission devoted the first several hours of its meeting to the legislative map, including in Maricopa County, where it had thus far made relatively few changes. Much of that discussion centered on the majority-minority districts the AIRC plans to draw.

One of those, District 11, originally was drawn as an “L” shape that would take in Laveen before breaking east around the south side of South Mountain to take in Ahwatukee. Johnson, the mapping consultant, said the district performs as a Voting Rights Act district, meaning that even if it’s not predominantly Latino, minority voters still have the ability to elect candidates of their preference.

But Neuberg said she’s heard public feedback against using South Mountain to divide a legislative district. Based on the commissioners’ input, the mapping consultants redrew that part of the map to remove Ahwatukee from District 11, which now extends into south and downtown Phoenix.

The changes the commissioners proposed will lay the groundwork for the AIRC as it prepares for a marathon week to come. The AIRC will hold daylong meetings every day next week except Friday as it attempts to meet a Oct. 27 deadline to approve its draft maps while dealing with the difficulties imposed by pandemic-induced delays to the 2020 Census.

Associate Editor Jeremy Duda is a Phoenix native and began his career in journalism in 2003 after graduating from the University of Arizona. Prior to joining the Arizona Mirror, he worked at the Arizona Capitol Times, where he spent eight years covering the Governor's Office and two years as editor of the Yellow Sheet Report. Before that, he wrote for the Hobbs News-Sun of Hobbs, NM, and the Daily Herald of Provo, Utah. Jeremy is also the author of the history book “If This Be Treason: the American Rogues and Rebels Who Walked the Line Between Dissent and Betrayal.”