The coronavirus pandemic has kick-started a host of online and remote services, but not all of them are as useful as expansions to telemedicine or having groceries ordered online and delivered to your doorstep: Fake online pharmacies have also proliferated during COVID-19, putting their customers at serious risk.

“Criminals will use any emergency or crisis to make money,” John Hertig, vice chair at Butler University’s College of Pharmacy and Health Sciences and chairman of the Alliance for Safe Online Pharmacies, told the Arizona Mirror.

Due to the pandemic, many people across the country and in Arizona were restricted in their movements, especially those with pre-existing health conditions that required specific medications. With that came a boom in fake online pharmacies taking advantage of the situation, Hertig said.

Online pharmacies have existed almost as long as the internet, as have ones that are operated by criminal enterprises or individuals who are not qualified to make or properly store the pharmaceutical compounds needed to make a litany of drugs.

“Most consumers think that, if it shows up in that first page results in Google, it has been approved by the FDA or Google,” Hertig said, adding that many consumers are drawn in by low prices and the ease of use.

Arizona, which has a large elderly population, is particularly at risk for fake online pharmacy scams.

The issue of fake online pharmacies has become so rampant that the Drug Enforcement Administration issued its first public safety alert in six years, warning of an increase in fake prescription medicines being sold online that contain dangerous drugs like fentanyl and methamphetamine.

Fentanyl and methamphetamine are not the only things that these fake pharmacies are putting into their drugs. Some contain ethylene glycol, a chemical commonly found in antifreeze and brake fluid, because it can make things have a “sweeter” taste. In some cases, it has been found in medications intended for children.

“It’s not a great business model,” Hertig said about using antifreeze in medications, but it can be a cheap alternative for those fake online pharmacies trying to make a quick buck.

Other times, law enforcement has found these pharmacies selling sugar pills as medicine. Or the pills are cut with inert substances like brick dust or chalk in order to dilute the medication used, allowing them to sell more pills, Hertig said.

But this is just the tip of the iceberg and in the wake of COVID other issues have begun to arise, especially with “alternative” treatments.

Earlier this year, a pharmacist in Utah was arrested after illegally buying a bulk amount of hydroxychloroquine from a wholesaler in China that had mislabeled the controversial drug. That tactic is commonly used by wholesalers that sell to non-reputable online pharmacies, said Shabbir Imber Safdar, executive director of the Partnership for Safe Medicines.

Chinese and Indian companies make what are known as “precursor chemicals” that are needed for many pharmaceutical compounds including hydroxychloroquine and the now popular ivermectin.

“It’s not hard to get your hands on this stuff — it’s big money for this stuff,” Safdar said.

Safdar said they have not seen fake ivermectin yet, but the drug has been gaining more popularity among vaccine skeptics who have seen it as an alternative to getting a free vaccine.

In Arizona, the drug has led to an increase in calls to poison control centers with one person even being hospitalized and people are doing desperate things to try to get their hands on the medication.

The Mirror found multiple online pharmacies alleging to be based in Canada — but that say they can’t deliver drugs to Canadians, for unexplained reasons — selling the drug in paste form and in an injectable form meant for animals as well as in pill form. None of these forms required a prescription, however, hydroxychloroquine did on at least one of the sites.

None of the sites met the standards of LegitScript, a website that helps consumers determine if an online pharmacy is a legitimate pharmacy or not. 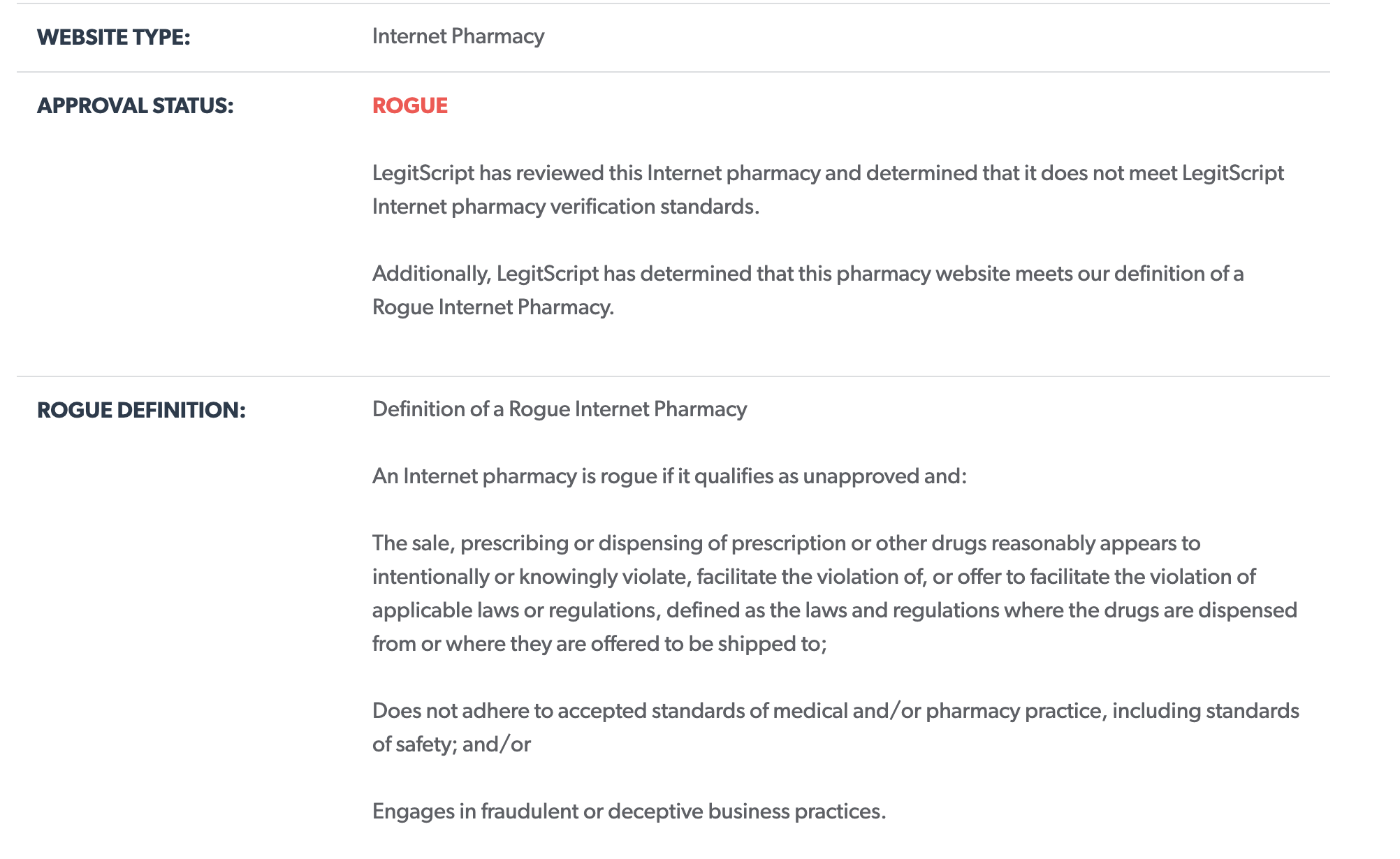 While reputable online pharmacies are regulated by the federal government and the states, the fake pharmacies based in foreign countries are not — and they prey on uneducated consumers.

“The lack of a pharmacy license means that nothing else matters, it is implicitly not safe,” Safdar said. “We have seen all these examples of people operating with no regulatory oversight.”

Because they are foreign, the online pharmacies can’t be regulated by the Arizona Board of Pharmacy, and the board has no power to conduct any investigations or enforcement actions against them. The Board of Pharmacy did not immediately respond to a request for comment for this story.

This leaves enforcement on these pharmacies up to the federal government and other international agencies.

“If it is all federal, that is a lot of crime competing for a lot of law enforcement hours,” Safdar said.

The DEA did not respond to a request for comment for this story.

Consumers can still protect themselves by using sites like LegitScript to make sure they are using a real online pharmacy with board certifications and is based within the United States.

For now, people like Safdar and Hertig are sounding the alarm and trying to get their colleagues, law enforcement and consumers to listen and be educated on the issue which is continuing to grow in scope as we become a society more and more reliant on delivery services.

“There is a population of the internet that now will buy everything online,” Hertig said, “This isn’t going away. If anything it has been exacerbated by the pandemic.”