State will follow new CDC mask guidelines, while Ducey lashes out at feds

State health officials will update its guidance to follow new recommendations from the CDC urging people to wear masks in schools and for everyone, including those who have been vaccinated against COVID-19, to wear masks in enclosed public spaces — though they remain strictly voluntary due to new state laws prohibiting mandates.

The U.S. Centers for Disease Control issued the new recommendations Tuesday amid rising COVID case numbers, which public health officials blame primarily on the unvaccinated. Those guidelines recommend that all students, teachers, staff and others in K-12 schools wear masks. All people, regardless of vaccination status, are urged to wear face coverings in public spaces.

Those recommendations apply to anyone in a county with substantial or high transmission of the novel coronavirus. Of Arizona’s 15 counties, only Cochise and Yuma don’t meet that threshold, and Arizona Department of Health Services Director Cara Christ said “it’s just going to be a matter of time” before those counties are at that point.

Christ said ADHS is reviewing the new CDC recommendations and will update state guidelines to match them. Given the rise in COVID-19 cases in Arizona and the increasing prevalence of the Delta variant of the virus, Christ said she recommends that Arizonans wear masks in schools and in public spaces when they’re with people who don’t live in their households.

“It doesn't really change the message that public health has been giving. So, our recommendation now is that everyone in schools should wear a mask,” Christ told the Arizona Mirror.

However, public schools in Arizona are now prohibited from requiring students to wear masks due to a new state law that Christ’s boss, Gov. Doug Ducey, signed into law in July, a decision that was widely criticized by public health officials. Ducey also recently reimposed a ban on cities and counties requiring mask usage in public places, and signed legislation exempting businesses from enforcing any such mandates.

Christ said she believes many people will voluntarily abide by the new recommendations and that the new lack of enforcement mechanisms wouldn’t be a problem. She cast doubt on the effectiveness of mask mandates, saying that even when most of the state was under a mask mandate in the latter half of 2020 and earlier this year, many people still weren’t following them.

“People have gotten used to wearing masks, so those that are willing and were going to wear masks before, now that it’s the recommendation again, I think you will start to see more people wear masks,” Christ said. “I think, hopefully, people will be less resistant to adopting something because we’ve already adopted it once and people are used to it, versus I think that first time it was very different.”

Asked whether the new laws on barring mask mandates sends a mixed message about the ongoing dangers of COVID-19, Christ said, “That might be a great question for our lawmakers.” 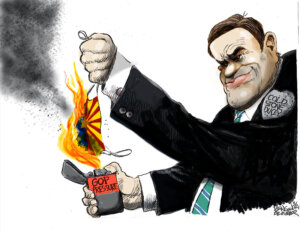 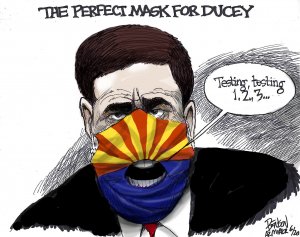 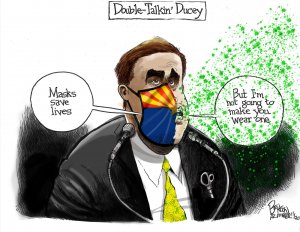 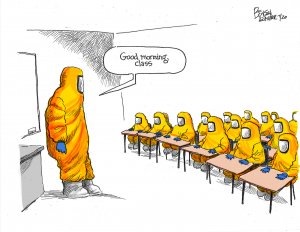 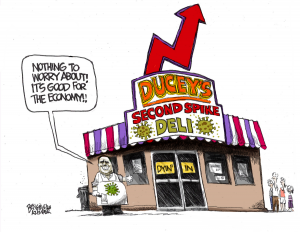 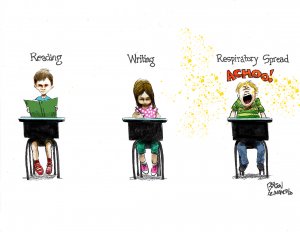 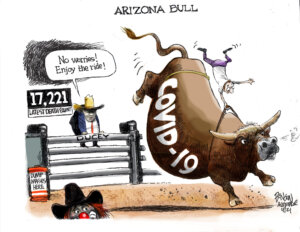 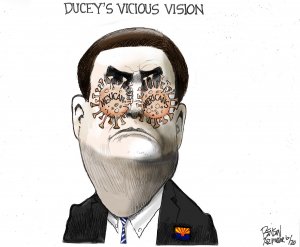 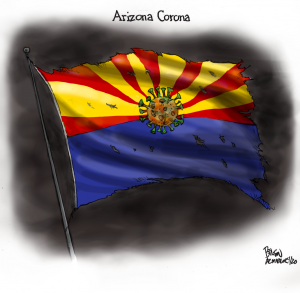 But Ducey was emphatic that he wouldn't change any of the laws restricting public health efforts to combat COVID-19 or any other public health emergency. In a press statement, Ducey emphasized that Arizona does not allow mask mandates, vaccine mandates, “vaccine passports” or discrimination in schools against people who aren’t vaccinated.

The governor called the new guidance an example of President Joe Biden’s “inability to to effectively confront the COVID-19 pandemic” and said the “unnecessary and unhelpful” new recommendations would be self-defeating.

“Today’s announcement by the CDC will unfortunately only diminish confidence in the vaccine and create more challenges for public health officials 一 people who have worked tirelessly to increase vaccination rates,” Ducey said, without addressing his own state health director’s decision to update state recommendations to mirror the new CDC guidelines.

Superintendent of Public Instruction Kathy Hoffman responded to the CDC guidance by calling on Ducey and lawmakers to once again give school districts the decision-making authority to require masks on K-12 campuses.

“We know masks work and, with rising cases, they’re a vital part of our effort to reduce everyone’s COVID-19 risk,” Hoffman said in a press statement. “I encourage teachers, administrators and families to listen to the CDC and take individual action to keep themselves and each other safe by wearing a mask during in-person school. Students, teachers, and parents are ready to get back to in-person learning, but it takes all of us.”

Christ pointed to the higher vaccination rates among older Arizonans who are at the most risk. Nearly 88% of Arizonans 65 and older, 71% of people aged 55-64 and 60% of people 45-54 have been vaccinated, according to ADHS statistics. She noted that people 55 and older account for about 90% of the state’s COVID-19 deaths.

The new guidelines come amid rising cases and hospitalizations in Arizona and across the nation. Christ said she expects cases to continue rising, though not to the levels Arizona saw during surges last winter and in the summer of 2020 because the majority of the state’s 55-and-older population has been vaccinated.

“I would anticipate those cases continuing to increase for the next few weeks, I guess, before probably plateauing and then leveling off,” Christ said.

Will Humble, the executive director of the Arizona Public Health Association and the former ADHS director, said he supported the new recommendations for schools, though he disagreed with the guidelines on masking in public places, saying the CDC didn’t back up that recommendation with evidence.

But Humble said the new recommendations will be completely ineffective due to Ducey’s prohibition of mask mandates in schools. That’s especially problematic for students under the age of 12, who are ineligible for the vaccine.

“Unless you do universal masking, you’re going to have middle schools with like two of the 28 kids wearing masks,” Humble said.

The former state health director said he hoped that a school district would sue to overturn the ban.

Humble, who has been a fierce critic of Ducey’s handling of the COVID-19 pandemic, also said the governor’s comments about the Biden administration were disingenuous, given his support for policies that he said have made it more difficult to combat the outbreak. He noted that Ducey barred universities and community colleges from requiring students be vaccinated to attend school, and that he attempted to bar school districts from requiring that unvaccinated students quarantine for 10 days after being exposed to the coronavirus.

“He’s removed those tools from all those toolkits, first by executive order and then by signing laws that are counterproductive,” Humble said. “He says he wants high vaccination rates but his policies don’t reflect that desire.”

State will follow new CDC mask guidelines, while Ducey lashes out at feds