Tom Horne, who held the position of superintendent of public instruction for eight years, announced Thursday he’s running for the office again, on a platform against bilingual education and critical race theory.

“Since I left office, much of my work has been undone,” said Horne, who was accompanied by Rep. David Cook, R-Globe, and Rep. Judy Burges, R-Sun City.

Horne, a Republican, was behind a ban on ethnic studies in the state during his tenure and had to defend the ban in court even after his time in office was over.

The ban was found to be unconstitutional but Horne said Thursday that if elected, he’d appeal the ruling from a “liberal 9th circuit judge” and that with a now “conservative (U.S.) Supreme Court” he feels an appeal would rule in his favor.

Horne handed reporters present at his press conference a 14-page packet detailing his positions, which include a return to English immersion over bilingual education, using the state to take over failing schools, “killing ethnic studies” and ensuring schools do not use The New York Times’ 1619 Project, which reframes U.S. history around the date when enslaved people were first brought to America.

Horne served most recently as Arizona’s Attorney General from 2011 to 2015.

In 2014, Horne faced allegations of campaign finance abuse that included claims that he used the AG’s office and his staff to help run his re-election campaign against Mark Brnovich, who defeated him in the Republican primary. In 2017, former Gilbert Town Attorney Michael Hamblin and Daniel Barker, a retired Court of Appeals judge, concluded that Horne broke the law, but recommended no criminal charges or fines. Horne had already paid a $10,000 fine to the Citizens Clean Elections Commission over the matter.

In a separate investigation, Cochise County Attorney Brian McIntyre concluded that year that there was not enough evidence to convict him or to conclude that he and a former aide violated campaign finance laws during his first campaign for attorney general in 2010.

“A false charge was brought against me, the courts vindicated me 100%,” Horne said when asked about the allegations and how they may impact his current run, adding that the people who brought the allegations are the “ones that have explaining to do.”

Horne was followed by the FBI while he was under investigation for the alleged campaign finance violations where he was witnessed leaving the scene of an accident to hide an extramarital affair, according to the FBI. The alleged affair was with a subordinate of Horne’s at the Attorney General’s Office in charge of foreign extraditions, according to the FBI report. Horne and the former aide are now married.

“I’m so upset about what’s happening,” Horne said when asked why he chose to run for superintendent instead of attorney general. “I felt I had to do something.”

Current Superintendent Kathy Hoffman, a Democrat, announced last month that she is seeking a second term. Horne is the second Republican to enter the race. Fowler Elementary School District Administrator Michael Trevillion announced last month he was running for the GOP nomination. 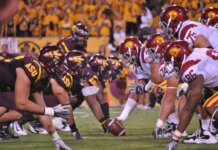 Arizona among states poised to allow college athletes to profit off their name, image and likeness