More than 2.5 million Arizonans have been fully vaccinated against COVID-19, but the numbers of people getting the shots are on the decline.

The state has been pushing to fill appointments at state-run vaccination sites that previously would see 110,000 appointments filled “in a few minutes,” Christ said.

“We think we’ve really gotten the low hanging fruit,” Christ said, saying that the people who are at the highest risk and wanting to get vaccinated got vaccinated first and quickly.

Additionally, ADHS worked to get vaccines to certain at-risk populations like nursing homes. “We are ready to move onto that next thing.”

That next step is trying to get vaccines into the arms of the 4.7 million Arizonans who have yet to get it. However, that task could prove to be difficult for a number of reasons.

Arizona has a reputation for being extremely vaccine hesitant with some health officials going as far as labeling the state an anti-vaccine hot spot. Arizonans have found ways to get out of a myriad vaccinations and large numbers of people in the state typically shun other vaccines like the flu shot.

Christ said that ADHS is looking into ways to target communities that are vaccine hesitant by using things like yard signs and geo-fencing, and even canvassing neighborhoods to try to educate people about the vaccines.

One issue the agency is trying to address is concerns about the Johnson and Johnson vaccine.

The vaccine was paused temporarily after six women experienced rare blood clotting issues but the ban has since been lifted. There have been 11.8 cases worldwide per one million doses given in women ages 30 to 39, the most at-risk group, and among men and women 50 and older, there have been less than one case per million doses.

Christ said that working to dispel concerns around the safety of the vaccine will be key. She sees the Johnson and Johnson shot playing a pivotal role in getting more people vaccinated, as people who are hesitant to get two shots could be more receptive to the company’s single-dose vaccine.

The Johnson and Johnson shot could  also be important in rural communities, migrant communities, among the homeless, and for public health agencies that set up mobile vaccine sites in targeted areas, Christ said.

“We are working hard to communicate the safety of that vaccine after the pause of that vaccine by the FDA,” Dr. Nick Staab, a Medical Epidemiologist for Maricopa County said to the Mirror. “At this point education is becoming a bigger push in our effort than simply getting vaccines out.”

Early on, Staab said people were eager to get the shots, but now the county is shifting to an educational process while they work on getting the vaccine allocations they need.

“Our biggest limitation in this effort has been the supply of vaccine,” Staab said. “One of our primary goals is to get the vaccine back into the medical home and to where people are accustomed to being vaccinated.”

Staab said that getting more shots into the hands of primary care providers would be a boon to vaccination numbers, as many people feel more comfortable getting the vaccine from their doctor as opposed to a drive-through facility.

“The population wants to go to get vaccinated where they are comfortable,” Staab said.

Those drive-through facilities are also slowly being phased out in favor of walk-in clinics, primary care physicians and pharmacies.

“The heat started impacting us about three weeks ago,” Christ said of the state-run vaccination sites. “The iPads would overheat.”

ADHS recently moved all of its vaccination centers indoors and moved the State Farm Stadium vaccination site indoors to the Gila River Arena in anticipation of Arizona’s triple digit heat.

“There are some other strategies that we are already looking at doing,” Christ said, adding that employer based vaccinations and a partnership with Arizona State University to do a mobile vaccination program are in the works. “We are doing better in a very short period of time. However, we are putting a lot of effort into it.”

The main thing Arizona public health officials are trying to do in the coming weeks and months is remind Arizonans that the vaccines are safe.

“The efficacy of the three vaccines that are authorized by the FDA are really incredible,” Staab said. “From a safety perspective, the safety tools that are being sued to continually monitor the number of people who are vaccinated are really proven to do what they were made to do.”

A growing number of myths have surfaced around the vaccine and Arizona has a strong contingency of anti-vaccination champions. But public health officials seem confident in their messaging.

“No vaccine is 100 percent but this vaccine is very good at preventing hospitalization and death,” Christ said. “I don’t think we can ever get rid of COVID but we can get back to a sense of normalcy.” 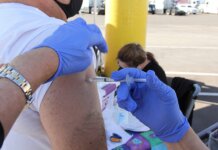 A year after the first Arizona COVID surge, by the numbers