Newly reviewed footage by Arizona Mirror raises new questions about former Republican lawmaker Anthony Kern’s activities around the U.S. Capitol on Jan. 6 as the lawmaker continues to participate in a recount of Maricopa County’s ballots from the 2020 general election.

Kern has continually insisted that he did not breach the Capitol and no footage or other evidence suggested otherwise. Photos show Kern on the front steps.

However, footage reviewed by the Mirror shows that Kern was present at other parts of the Capitol breached by protesters.

In a video posted to YouTube by a Virginia House of Delegates candidate who attended the protest turned riot, Kern can be seen walking along the West Front area of the Capitol as well.

The Mirror analyzed videos archived by ProPublica to determine around what time the video may have been taken and when Kern may have been in this particular area of the Capitol on Jan. 6.

In the video posted on YouTube, a large Trump flag is draped over part of the Capitol building that isn’t seen in many of the videos posted by rioters on the social media platform Parler until shortly after 3 p.m.

By this time in the day, protests in this area of the Capitol had already been violent for some time and protesters had already broken in or were in the process of breaking into the Capitol.

They had been violently clashing with police, throwing water bottles, pushing, punching and finding ways past the D.C. Metro Police, who eventually fell back.

“Come straight, go this way,” an unidentified man in a blue suit says to Kern, leading him through the area seen in the video. The man can be seen in photos with Kern on the Capitol steps holding a sign that reads “Save America” with the url “TrumpMarch.com” which now redirects to Women for America First.

Kern, a Republican from Glendale, did not respond to the Mirror’s questions about the video, who the man in the suit was or provide further details about his activities on Jan. 6 and whether he was aware of the scope of the violence that had occurred by that point.

Kern has been a proponent of the “#StopTheSteal” movement since the election, using the hashtag 17 times on Twitter from November through Jan. 6.

“D-Day in DC to support Arizona’s and America’s duly elected President Donald Trump! #StoptheSteal,” Kern tweeted on Jan. 6 around 10 a.m. with a picture of the stage where Trump would soon speak.

Both Kern and state Rep. Mark Finchem, R-Oro Valley, have come under fire for their presence in D.C. on Jan. 6 with Arizona Democrats asking the Department of Justice and FBI to investigate their roles in the violence that occurred.

Kern would later say he agreed with Republican Congressman Andy Biggs that those who broke the law should be prosecuted and that he condemned the violence that occurred that day.

The day before, Kern rallied outside the Capitol with a who’s who of Stop the Steal personas, including the movement’s ringleader, Ali Alexander, and election fraud conspiracy promoter, Mike Lindell, the CEO of MyPillow.

“In Arizona there is a brave man that I am trying to convince to run for state senate or Congress, Anthony Kern,” Alexander said before Kern took the stage as rain poured down on Jan. 5.

“Mitch McConnell, I am not worried about optics here today,” Kern told the crowd before speaking about abortion and comparing the situation to the invasion of Normandy in World War II. “We will not allow the vote to be stolen from our duly elected president.”

There is no evidence that fraud or malfeasance affected the outcome of the presidential election.

On Jan. 6, Kern tweeted in the morning before Trump’s speech and did not tweet again until 3 p.m. That tweet was an image of the Capitol steps, overtaken by protesters.

Images circulated online showing Kern among those protesters on the steps and he later mocked some of his critics on Twitter.

“You ok @AzHouseDems? Want me to call the police?” he tweeted on April 19, responding to criticism by the Arizona House Democratic caucus after news broke that Kern was working on the Arizona audit .

After Kern announced on Twitter that he would participate in the audit, former Secretary of State Ken Bennett, a spokesman for the audit, told the Mirror that the ex-lawmaker would only be serving as a volunteer observer, not counting ballots. Reporters later spotted Kern counting ballots at Veterans Memorial Coliseum. Bennett said he’d seen Kern’s name on a list of volunteer observers but didn’t realize that he had also applied to work as a counter.

Kern, who was still a lawmaker the day of the riot, has fought the release of his phone records related to the events of the day. Finchem has released some of the messages that were requested by the Arizona Republic which show that he and Alexander coordinated on some Stop the Steal-related events in Arizona and D.C. Kern has yet to release any records. 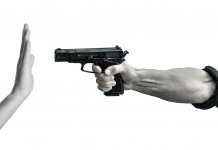 Our generation must end the gun violence epidemic

by Jerod MacDonald-Evoy, Arizona Mirror
May 5, 2021