Arizona laws made me an activist.

As a teenager, I lived through the passage of SB1070, the anti-immigrant law that legalized racial profiling, and saw what it did to our state. My family and neighbors were targeted, and families were ripped apart forever. While other teens were planning their sweet sixteen, I spent my time knocking on doors to help people register to vote.

I felt frustrated and angry that the place I called home was so hostile to the people I loved most, my immigrant family. I sacrificed so many years to make Arizona a place where we could go past just surviving, and in some future, thrive. As a young activist, I envisioned voting as the bridge to a better future for our state and everyone that calls it home.

Arizona’s Republican legislators have once again embraced controversial policy, and I remember how I felt a decade ago — and how our state suffered as a result. These legislators have callously pushed anti-democracy bills.

Worse yet, they are being funded by well-known corporations that choose to be silent in the face of these calculated attacks on our right to vote like purging hundreds of thousands of eligible voters from the permanent early voting list. These corporations must act now to publicly denounce these anti-democracy bills before it’s too late.

Corporations like Pinnacle West, the parent company of utility giant APS, gave $104,100. And Cox Communications, which I pay for internet service, gave $31,550. Likewise, Wells Fargo, where I bank, gave $10,000. Other corporate backers of these GOP lawmakers responsible for the bills attacking our right to vote and gutting our First Amendment right to protest include Farmers insurance ($27,000), Allstate Insurance ($7,850), CVS ($9,700) and UnitedHealth Group ($16,400).

I wonder how Arizonans would feel that their insurance companies and internet service providers are the same ones funding these attacks on our rights?

It is so infuriating to see the hypocrisy of corporations like Farmers Insurance offer accommodations to workers to encourage them to get out and vote while at the same time donating at least $27,800 to the Republicans who seek to disenfranchise those same employees and harm democracy.

The silence from corporations is deafening, and yet the choice has never been so painlessly simple. These companies can choose to stand for democracy or continue actively choosing silence. And not saying anything at all while funneling thousands of dollars into the hands of the very Arizona legislators responsible for these anti-democracy bills sends a clear message.

Interestingly, this silence from corporations could be stemming from closed-door conversations where politicians are working hard to give them a false sense of ease with promises of adding amendments to “water down” these bills. Corporations would do well to understand there is no amendment to these bills that would keep this from being bad news for Arizona and bad news for business: Disenfranchising voters and chipping away at constitutional rights, at any level, is unacceptable.

Dismantling our right to vote literally takes away our choice on how we live our lives. When all issues on our ballot impact everyday people — from children’s schools to employment and health — making it harder for people to vote strips us of our right as Americans to have a say over our own lives.

These corporations only need to look back a decade to the waves of backlash Arizona suffered following the controversy of SB1070. The widespread boycotts, the endless lawsuits, the significant loss of revenue and loss of investment made our state a business pariah. Now, the threat of Arizona losing the Super Bowl in 2023, and the jobs and revenue that would benefit Arizonans, is very real. Corporations, as the political power players they are, are standing at a pivotal moment. Will they choose to denounce these bills and save our democracy? Or will they choose to remain silent, ignore the warning signs, and face the swift repercussions?

Arizona is on the cusp of becoming the next Georgia, and the clock is ticking. Several corporations chose silence there, too, and some only gave statements after anti-democracy bills passed, when it was completely useless.

SB1070 changed the course of my life. I do not know if I would be the activist I am today if that law had not torn my family apart, if I had not experienced the injustice of seeing my family members targeted solely based on the brownness of their skin. What I do know is that it is wrong to choose silence when we all have a voice, and we all have the power to speak up. I knew this as a teenager, and I know it now as an adult.

These corporations know better and it is past time they step up. 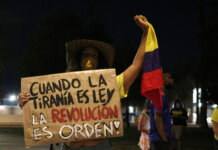 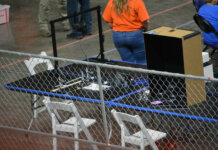