Two separate gatherings of Trump supporters at the Arizona Capitol showcased divergent views on the violence that gripped the nation’s capital on Wednesday when the president incited a mob to descend on the U.S. Capitol, where they stormed the building to stop Congress from certifying President-elect Joe Biden’s win in the November election.

In all, the roughly 1,000 mostly peaceful Trump supporters — many carrying firearms — gathered on Arizona’s Capitol Mall as Congress gathered to certify the electoral college votes. But while the few elected officials who addressed the crowd called for unity in responding to Biden’s win, many in the crowd rejected those ideas.

Stacy Gentile, who worked on Daniel McCarthy’s failed campaign for U.S. Senate, lambasted the mainstream “GOP dirtbags,” accusing them of sabotaging Trump. He labeled Vice President Mike Pence a “deep-state operative” for not using his ceremonial role presiding over the counting of the electoral college votes to overturn the election result and grant Trump a second term in office.

The perpetrators, he declared, were so-called “Republicans in name only,” or RINOs, who are “actively working against constitutional-loving patriots.”

“The fight is all around us,” Gentile said. “There really are no more political options at this point…We have to realize that (Arizona Repubilcan Party Chairwoman) Kelli Ward, Doug Ducey, Martha McSally, the McCain group, the Jeff Flakes, the other RINOs up in D.C., they aren’t your saviors…

“We are gonna see holy hell on this land like you’ve never seen before.”

One person in the crowd shouted “get rid of them!”

20-year-old Ethan Nichols, who describes himself as a staunch Second Amendment supporter, was disdainful of state and federal Republican leadership, including Ducey and Pence.

“This is a time when the true colors of the Republican Party have really shown,” he said. 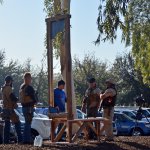 Pro-Trump demonstrators set up a guillotine at the Arizona Capitol on Jan. 6, 2021, during a rally for conservatives upset that Congress was poised to certify President-elect Joe Biden’s victory. Photo by Jerod MacDonald-Evoy | Arizona Mirror 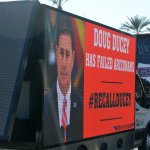 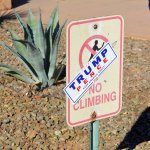 Supporters of President Donald Trump vandalized a sign at the Arizona Capitol on Jan. 6, 2020, during a rally to support the president and call on Congress to overturn the 2020 election, in which Trump lost to Joe Biden. Photo by Jerod MacDonald-Evoy | Arizona Mirror 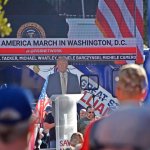 A cardboard cutout of President Donald Trump on the stage during a rally on the Arizona Senate lawn on Jan. 6, 2021. Photo by Jerod MacDonald-Evoy | Arizona Mirror

That sentiment permeated the crowd, which led some to reject calls for conservatives to unite. State Sen.-elect Kelly Townsend, R-Mesa, compared Republican infighting to friendly fire in battle.

“Today, I’ve seen some behavior here that’s very concerning to me, because I consider all of you family. You are patriots, you’re Americans, you believe in the Constitution,” Townsend told the crowd.

“From my heart, I am begging you to bury the hatchet temporarily… Every single one of us is on the same team today.”

That prompted a handful of boos from the audience.

“It’s too late to bury the hatchet!” one man shouted toward the stage.

State Rep. Walt Blackman, a Snowflake Republican whose wife was one of the rally organizers, said he understands why many conservatives have grown mistrustful of the Republican Party, but he urged unity.

“Let’s get our heads on straight and treat people with respect and dignity and let’s get all up under the same tent,” he said.

One thing the rally attendees were unified on was the thoroughly disproven belief that the November election was stolen from Trump. The president and his allies have filed more than 60 lawsuits contesting elections across the country — including nine in Arizona — that have been rejected because they had no evidence to support their implausible and oftentimes wild claims.

Madeline Ackley is a journalist student at the ASU Walter Cronkite School of Journalism and Mass Communication majoring in digital journalism. She is currently the arts and entertainment editor at the Downtown Devil, an independent digital publication run by Arizona State University students. She covers business, arts and local politics.