Republican Stephen Richer will be the next Maricopa County recorder, bringing an end to a sometimes rocky tenure by his Democratic predecessor, Adrian Fontes.

Fontes tweeted Thursday that he’d called Richer to congratulate him on winning the race to be Maricopa County’s top election official. After chipping away at Fontes’s lead in the days after the election, Richer pulled ahead over the weekend, and as of Wednesday night he was ahead by more than 4,600 votes.

Richer, an attorney with the law firm Lewis Roca Rothgerber Christie, looks to bring a much different approach than Fontes did to the office. He said he wanted to “make the Recorder’s Office boring again” and ran on a platform of ending Fontes’s brash and adventurous style, which he described at times as “partisan activism” and “rogue policymaking.”

Among Richer’s plans for the office are to look at creating an oversight board for the Recorder’s Office composed of each political party in Arizona that would give them an inside look at how the office functions. He said he will provide more transparency and give more advance notice and explanation regarding future changes at the office.

Richer told Arizona Mirror he wants to “rebuild confidence in this process across party lines, and have a customer service mentality that hopefully serves all of Maricopa County’s 4.5 million customers very well.”

Fontes filed to run for recorder the day after the 2016 presidential preference election, when the reduction of polling places by longtime Recorder Helen Purcell left voters across the county waiting in hours-long lines. Fontes defeated Purcell, becoming, along with Sheriff Paul Penzone, the first Democrat to win countywide office in Maricopa since 1988.

Fontes’s tenure in office was often defined by a tendency to push the boundaries of election law in an attempt to expand access to voting, leading him to become embroiled in a number of controversies surrounding his policies, with mixed results.

On the eve of the 2018 general election, Fontes unilaterally decided to give voters extra time to verify the signatures on their early ballot envelopes. Election officials previously did so only when they received those ballots before Election Day, and simply disqualified ballots that arrived on Election Day if the signatures used to confirm their identities didn’t appear to match the signatures on file for those voters.

After Republicans filed suit over the change, a judge ruled that all counties should adopt the same policy. The legislature later enshrined that new policy into state law, requiring counties to give voters a five-day window to “cure” their ballots if the signatures appeared deficient.

Judges rebuffed Fontes on other policies. After Attorney General Mark Brnovich took him to court in March, a judge ordered Fontes not to follow through on plans to send early ballots to all registered voters eligible to vote in the presidential preference election, a plan aimed at curbing the spread of COVID-19 by reducing in-person voting.

The courts also ordered Fontes not to send instructions with early ballots for the general election informing voters that if they mistakenly voted for a candidate, they could cross out the name and vote for someone else. The Arizona Supreme Court ruled that the instruction violated state law, though such ballots are actually counted.

Republicans also raised concerns about Fontes’s use of emergency voting centers in the 2018 elections, alleging that he illegally allowed voters to cast emergency ballots for any reason after the early voting period ended before the general election and questioning the location of those centers.

In response to GOP concerns, the Arizona Republican Party hired Richer to conduct an audit of the 2018 election in Maricopa County. That audit, which included some dubious and unverified claims, concluded that Fontes’s conduct was questionable but not illegal. Richer launched his campaign against Fontes several months later.

Fontes’s handling of the 2018 election also led the GOP-controlled Maricopa County Board of Supervisors to strip the Recorder’s Office of responsibility over Election Day and emergency voting. In many counties, such responsibilities are the purview of the county elections director, not the recorder.

Richer said he hasn’t yet considered whether he’ll ask the supervisors to reinstate the recorder’s responsibility for those duties.

“If it’s working, you know, we want it to keep working,” he said.

As recorder, Richer said he’ll be deferential and respectful toward the county attorney, and hopes to forge strong working relationships with the Board of Supervisors, other county recorders and Secretary of State Katie Hobbs.

Fontes said he has no regrets about the way he ran the Recorder’s Office. He said the office had “deteriorated into a second-rate department” and he made the changes that voters elected him to make.

The only people who consider Fontes’s tenure in office to be controversial, he said, are “vote-suppressors and vote deniers.”

“Every move I made was to increase access and expand our democracy. And I will never shy away from that record,” he said.

Fontes attributed his loss to the difficulty in campaigning while preparing for the election, as well as to a massive increase in votes cast in the recorder’s race. He said Maricopa County tallied about 420,000 more votes for president this year than it did in 2016, but about 487,000 more votes in the race for recorder.

“I think there was a concerted effort by the state and county (Republican) party to retake this office. And, frankly, because my focus was the integrity of the elections, I kind of had to run with my hands tied behind my back because I could not be as politically aggressive as I may have been in other circumstances,” he said. “I think, given all of those factors and a very narrow margin, we did very, very well.”

Ultimately, Fontes said he’ll walk away from office proud that he did the job voters asked him to do.

“We got more voters, more access, and all of that during a global pandemic. So, as far as job performance satisfaction, we crushed it on any account. The political outcome is secondary, and it ought to be,” he said. 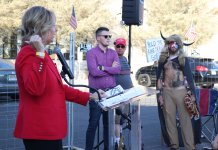