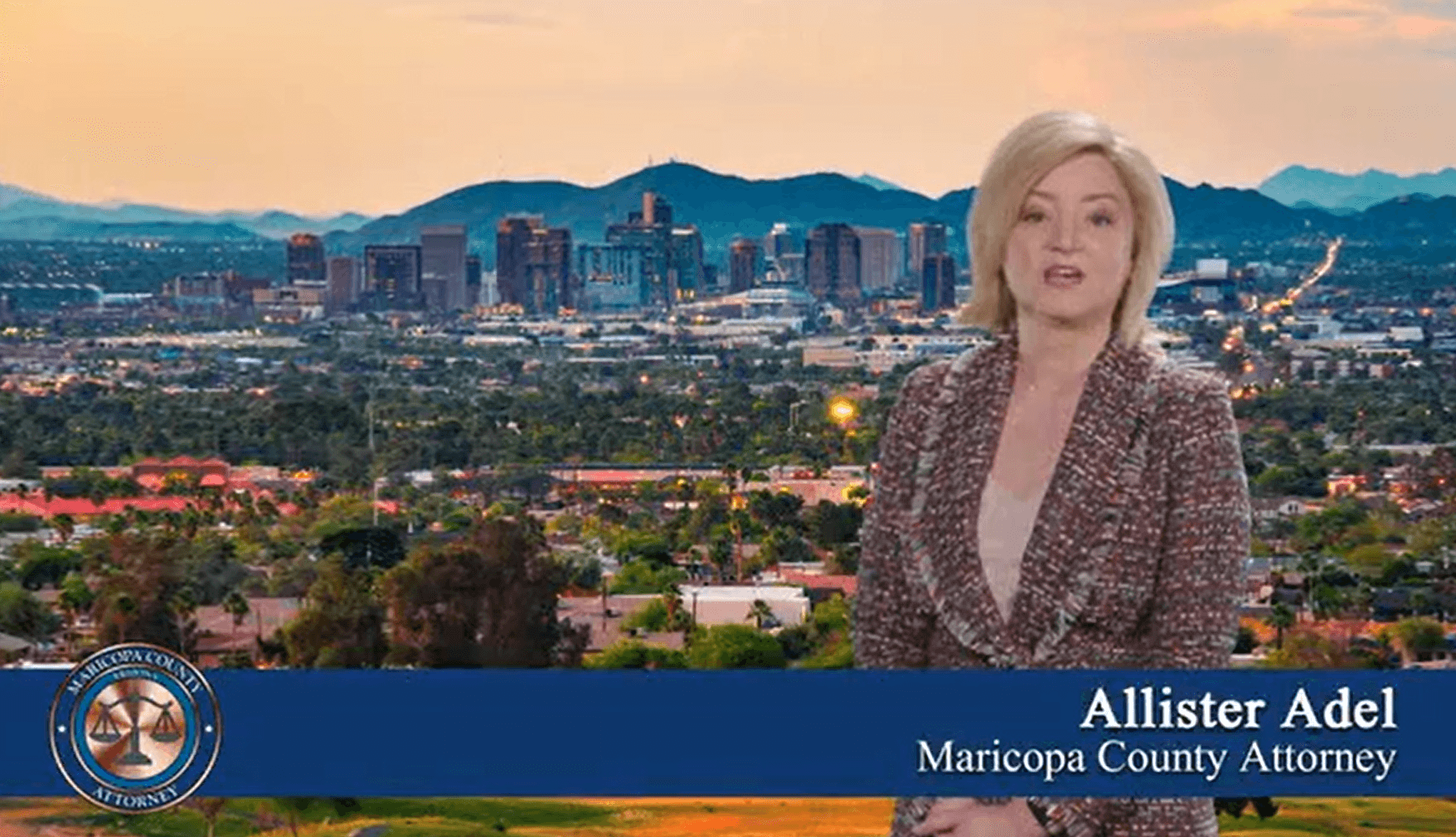 Maricopa County Attorney Allister Adel, who remains hospitalized after suffering a medical emergency on election night, has taken the lead in her bid for a full term.

Maricopa County has about 275,000 ballots left to count, not counting about 18,000 provisional ballots that must be verified. The remaining ballots are early ballots that were dropped off at polling places or received by election officials in the mail this week.

Adel underwent emergency surgery on election night after suffering bleeding on the brain, according to a spokeswoman who described her condition as “stable but serious” on Wednesday morning. Details are scarce, and it’s unclear what her condition or recovery prospects were as of late Wednesday night.

No other countywide races saw lead changes early Thursday morning, though Republicans gained ground or expanded leads in other races.

County Recorder Adrian Fontes’s lead shrank to about 26,000 after he went into Wednesday with a lead of more than 51,000 over Republican attorney Stephen Richer. Republican county schools Superintendent Steve Watson narrowed Democratic challenger Jeanne Casteen’s lead to about 18,500, down from nearly 44,000 earlier in the day.

Republican John Allen increased his lead over Democrat Daniel Toporek to 45,000 votes in the race for county treasurer. The winner will replace Treasurer Royce Flora, whom Allen defeated in the Republican primary in August. And Assessor Eddie Cook, whom the Board of Supervisors replaced after Paul Petersen resigned from the post amid dozens of criminal charges involving his business facilitating adoptions of children from the Marshall Islands, now leads Democrat Aaron Connor by nearly 47,000 votes.

In the surprisingly competitive race for control of the Board of Supervisors, two Democratic challengers are clinging to tight leads. Jevin Hodge leads Republican Supervisor Jack Sellers by about 9,300 votes in District 1, which covers Ahwatukee, Tempe, Chandler, Gilbert and parts of Mesa. Democrat Whitney Walker holds a lead of just 2,900 over Republican Supervisor Bill Gates in Phoenix-based District 3. If both leads hold, Hodge, Walker and incumbent Supervisor Steve Gallardo would lead a Democratic majority on the board.

The Maricopa County Board of Supervisors appointed Adel as the county’s first female county attorney last year after her predecessor, Bill Montgomery, resigned to take a seat on the Arizona Supreme Court. Since then, Adel has moved away from Montgomery’s hardline, tough-on-crime stances, touting herself as a prosecutor who protects victims’ rights and holds criminals accountable while taking steps to reduce recidivism and be more judicious with the office’s resources.

Since taking office, Adel has increased access to diversion programs, including by eliminating a minimum $630 fee for defendants to take part. She has implemented “treatment first” policies in plea deals for defendants in drug cases. She’s allowed people convicted of drunk driving offenses to serve out their sentences in home detention. And she’s enacted a policy of dropping marijuana possession charges for defendants who obtain medical marijuana cards.

Adel has compiled criminal justice statistics from across the county and made the information available to the public through an online dashboard.

Adel has also publicly advocated for the legislature to require all law enforcement officers to wear body cameras. After announcing in September that she wouldn’t charge Department of Public Safety Trooper George Cervantes in the shooting death of Dion Johnson, an unarmed Black man, Adel noted neither trooper on the scene was wearing a body camera at the time, which could have shed more light on the incident.

In one of the highest-profile moves of her year-long tenure, Adel fired prosecutor Juan Martinez, most well known from the blockbuster Jodi Arias trial, over allegations that he sexually harassed women and retaliated against those who reported it.

Though Adel has taken a different approach than Montgomery and Andrew Thomas, the tough-on-crime county attorneys she served under at MCAO, Gunnigle painted her as more of the same, and pledged a more progressive course.

Gunnigle, a former prosecutor in Illinois and Indiana who now works in private practice, has advocated for ending cash bail and the use of Hannah priors, a mechanism by which prosecutors can charge first-time defendants as repeat offenders. She had pledged not to charge people for low-level marijuana possession. And she wanted to create a unit to review use-of-force incidents by law enforcement officers.

Arizona has one of the highest incarceration rates in the country, and Gunnigle believes the Maricopa County Attorney’s Office can do a lot to change that. She vowed to reduce the racial disparities that often lead to harsher charges and longer sentences for people of color.

Adel, a graduate of Arizona State University’s law school, spent seven years as a prosecutor in the Maricopa County Attorney’s Office, serving in the vehicular crimes, gang and drug enforcement divisions. She later served as general counsel at the Arizona Department of Child Safety. Adel was working as a private practice attorney and consultant for nonprofit organizations when the Board of Supervisors chose her from among an eight-person field to be the next county attorney.