The Arizona Department of Corrections Rehabilitation and Reentry said it has found a compound pharmacist it needs to carry out the state’s first execution in six years, hours after Attorney General Mark Brnovich said he’d also found a compounder the state could use to resume lethal injections.

The attorney general on Tuesday urged Ducey to instruct the corrections department to acquire pentobarbital from the supplier he found in August and to procure the services of the compound pharmacist. Brnovich also requested that leadership at ADCRR meet with his senior staff to “make plans for carrying out lawful executions expeditiously.”

But according to ADCRR Director David Shinn, Brnovich’s offer of a compound pharmacist was unnecessary. In a response letter to Brnovich, Shinn said his agency, at Ducey’s direction, had already begun the process of acquiring pentobarbital and had identified a compound pharmacist as well.

“I welcome the opportunity to meet with you and your senior staff to discuss these issues in further detail,” Shinn wrote to Brnovich.

Shinn expressed gratitude for Brnovich’s efforts to locate the lethal injection drug and a compound pharmacist.

“I and the entire Department stand shoulder-to-shoulder with you and the Arizona Attorney General’s Office to fulfill our respective duties under the law to ensure that justice, at long last, is served for the victims, their families, and our communities,” Shinn wrote.

In his letter to Ducey, the attorney general noted that there are 20 inmates on death row in Arizona who have exhausted their appeals.

“Many of those inmates committed heinous murders decades ago. We must ensure that justice is served for the victims, their families and our communities,” Brnovich said.

It was unclear when ADCRR planned to resume using the death penalty.

Executions have been on hold in Arizona since 2014, when death row inmate Joseph Wood was put to death for the 1989 murder of his estranged girlfriend and her father in Tucson. It took nearly two hours for Wood to die after he received a two-drug combination, during which time he struggled to breath and gasped for air.

In response to what Wood’s attorney called a botched execution, Arizona put new executions on hold. Since then, the state has struggled to acquire suitable lethal injection drugs. In 2015, federal officials seized a shipment of sodium thiopental at Sky Harbor International Airport that was intended for use in executions in Arizona and Texas.

Sodium thiopental and pentobarbital are the two drugs approved for use in executions by the corrections department under a 2017 policy, but the state has struggled to find suppliers.

The 2019 resolution of a lawsuit challenging Arizona’s lethal injection procedures, along with the location of a pentobarbital supplier earlier this year, put Arizona in a position to resume executions.

After the Attorney General’s Office informed the governor that it found a supplier of the lethal injection drug, the Ducey administration noted that executions couldn’t resume in Arizona until the state also found a compound pharmacist who could prepare the solid drugs for lethal injections.

Dale Baich, the federal public defender who defended Wood and the president of the American Civil Liberties Union-Arizona’s board of directors, said there may be other obstacles that prevent executions from resuming quickly. For example, he said the state must ensure that the compounder is licensed in Arizona to make sterile drugs and that the compounder can legally provide the drugs under federal law.

“I think it’s going to be a little bit of time before these issues play out,” Baich said.

Ryan Anderson, a spokesman for Brnovich, declined to identify either the pentobarbital supplier or the compound pharmacist, citing a 2019 ruling from the U.S. 9th Circuit Court of Appeals that allows the state to keep that information confidential.

Baich also said the COVID-19 pandemic could pose problems. ADCRR suspended in-person visitations at Arizona’s prisons in March, even for attorneys. And the corrections department would have to find a way to carry out executions without violating the precautions that the agency has put in place to curb the spread of the novel coronavirus.

Jared Keenan, an attorney with the ACLU-Arizona, expressed hope that Ducey, who hasn’t overseen an execution since he took office in 2015, will hold off on restarting executions in Arizona. Keenan said the death penalty has long been in imposed in a racially biased way, which has led other governors to take the “braver step” of enacting moratoriums while they determine how to address the problems with the system.

“We would hope that the governor may take that into consideration as well and not just worry about the sort of nuts and bolts of getting the execution drugs and reconsider the policy generally,” Keenan said.

***UPDATED: This story has been updated with additional information and comments, including ADCRR Director David Shinn’s response to Brnovich’s initial offer of a compound pharmacist. 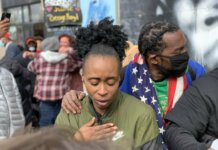