I know. I know. I shouldn’t be surprised by anything that comes out of Rep. Paul Gosar’s mouth or from his Twitter feed.

But I really was shocked to see this.

Hunter: “I love you too my little friend.” ? pic.twitter.com/QJiGQHxVuo

Gosar has a long history of flirting with and forwarding dangerous conspiracy theories like QAnon and birtherism. He blamed the white nationalist violence in Charlottesville in 2017 on an “Obama sympathizer” and promoted a debunked theory that philanthropist George Soros was a Nazi sympathizer.

Yet, I still didn’t think Gosar would sink to this. Why?

Because last year, when Gosar’s colleague, Arizona Rep. Ann Kirkpatrick (a Democrat from Tucson), revealed that she struggled with alcoholism and would take time off for treatment, Gosar responded with kindness, not snark.

“Ann’s announcement today takes a lot of courage,” Gosar said in a statement.

It was one of those rare moments in our political climate when Arizonans could look to their representatives on both sides of the aisle and think, “finally, decency prevails!”

For a brief moment, I actually believed addiction was one topic that would be off-limits in politics.

And why wouldn’t it be? After all, roughly 21 million Americans suffer from an addiction. That means tens of millions of American have first-hand knowledge and many millions more know what it’s like to have a family member or loved one suffer with or die from this disease.

Addiction affects both Democrats and Republicans, rich and poor, suburban and rural, men and women. And Mohave County, in Gosar’s congressional district, was ravaged by the opioid crisis — and at one point more opioid prescriptions were issued there than there were people.

Gosar, whose Twitter following tops 48,000, knows better. He understands how his words have the power to motivate or shame individuals, and his refusal to acknowledge that harm by removing or apologizing for his tweet, which received more than 20,000 “likes,” shows how far he’s willing to go to debase an opponent. Or, in this case, an opponent’s son.

Thankfully, thousands of people also condemned the tweet, including many who referred to Gosar as “cruel” and “evil” and spoke of the immense pain of losing a loved one to the disease.

It also struck a chord with individuals in the law enforcement community such as Maricopa County Sheriff Paul Penzone and Tucson Police Chief Chris Magnus, who quoted the tweet and asked people to “recognize how deeply, deeply wrong it is for anyone, let alone a member of Congress, to mock addiction.”

Just one day prior to the offending tweet, Maricopa County Supervisor Bill Gates, a Republican who is running for re-election, tweeted out an endorsement from Paul Gosar, one that Gates said he was “honored” to receive.

Gates, who many considered a moderate Republican, has yet to refute the endorsement or the tweet.

Perhaps those Republicans don’t want to give air to another crazy Gosar tweet. Or perhaps they just don’t care.

Those same Republicans, after all, have stood in lockstep with Donald Trump even after his despicable comments about women, immigrants, Muslims, disabled people, John McCain, and fallen soldiers and wounded veterans.

Over the weekend, Trump held a rally in Michigan and demanded Gov. Gretchen Whitmer—the target of a domestic terrorism plot to kidnap and assassinate her—reopen the state. When supporters yelled, “lock her up,” Trump responded with “lock them all up.”

It seems not even violence against one’s opponents is off the table.

I’m not sure how this country comes back from such despicable behavior by those who are supposed to be leading our government.

But I do know that the longer we tolerate or “like” or shrug off comments like Paul Gosar’s, the harder it will be to solve complex policy issues or keep a divided America from destroying itself. 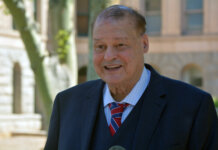