The five finalists to be the chair of the Arizona Independent Redistricting Commission, who could be one of the most important and influential people in the state’s politics for the next decade, have been set.

A public school teacher, a utility company attorney, a psychologist and pro-Israel advocate, a technology entrepreneur and gun store owner are all in the running to be the redistricting commission’s independent chair. The crucial post serves as a potential tiebreaker between the commission’s two Democrats and two Republicans as they draw the legislative and congressional districts that Arizona will use for the next 10 years.

The appellate commission chose the five after an all-day meeting that included interviews with all 11 semi-finalists for the independent chair position.

In choosing those five, the Commission on Appellate Court Appointments chose two candidates who are likely to draw significant opposition from Democrats, one for possible partisan leanings toward the GOP and one for his ties to Arizona Public Service. The appellate commission rejected two other candidates whom Democrats alleged were essentially Republicans in disguise.

The five finalists are:

Neuberg was the only unanimous finalist, receiving votes from all 14 of the commissioners who attended the meeting. She impressed during her interview, giving detailed answers and demonstrating a knowledge of the redistricting process as she answered questions about competitiveness and communities of interest, two of the criteria the IRC must use to draw district boundaries.

She described communities of interest, a sometimes vague term that can be used to describe any grouping of people with shared interests, as “the heart of what representation is,” and suggested that the previous IRC didn’t give proper consideration to that criterion. She noted that there’s a hierarchy of redistricting criteria in the Arizona Constitution, which states that competitiveness should be favored when it “would create no significant detriment to the other goals.” The last commission, she said, may not have entered the process with shared goals and a shared understanding of what the constitution requires.

“Now, having said that, I work  in the world of D.C. I think competitive districts, I think it’s wonderful. I think political fairness is wonderful. I aspire to that, within the context of understanding what our constitution lays out,” Neuberg said.

Neuberg is no stranger to politics. As a pro-Israel advocate and national AIPAC board member, she’s long been heavily involved in politics and is a frequent contributor to politicians, especially members of Congress, from both parties.

Other finalists are political novices. Cullen, the second-highest vote getter of the day, is a “regular person” but “outstanding citizen,” said Commissioner Jonathan Paton, who touted her independence. He said he spoke with a number of Cullen’s students and none could venture a guess as to her political leanings, despite the fact that she teaches about subjects like American government and criminal justice.

Paton said Cullen’s experiences as a teacher for the past 17 years would serve her well if selected for the commission.

“I think that for average folks to do this is not an easy thing. I think it’s a little bit easier for people who are attorneys and politicians and involved in the public sphere,” he said. “But as the son of a public school teacher, I can tell you that dealing with parents every single day and dealing with school-aged children every single day is probably one of the more challenging things you can do.”

Asked how she would mediate disagreements and resolve conflicts as IRC chair, Cullen said she would attempt to find common ground, acknowledge people’s opinions and make sure they feel their voices are heard. But there are times when people are simply going to disagree, she said, and in those cases, Cullen said she’ll simply have to act as the tie-breaking vote.

Loquvam said his work in the utility world, where he has to urge consensus on complex, difficult issues, would serve him well as a redistricting commissioner.

He made it clear that he would put a high premium on creating competitive districts, which he said would mitigate “hyperpartisanship,” encourage consensus building, help all communities be heard, and push lawmakers to focus more on the broader electorates of the general election rather than the narrow partisan bases they must appeal to in their primaries.

Commissioner Buchanan Davis said Loquvam’s references described him as unflappable, a person who won’t give in to pressure from interest groups, and who has the ability to weed through very complex data on complicated utility rate cases. He was impressed by what he termed Loquvam’s “even-keeled” temperament during his interview, which he said would make the attorney a good fit for IRC chairman.

Some critics, particularly Democrats, have opposed Loquvam’s candidacy due to his previous work for APS parent company Pinnacle West, which waged controversial political campaigns in recent years, including a 2014 campaign in which it secretly backed two Republican candidates for the Corporation Commission through a multimillion-dollar dark money campaign.

Teesdale said his experiences dealing with Wall Street and Silicon Valley investors would aid him navigate the work of the redistricting commission.

“I’ve been in 10 growth-based technology companies. These people in these rooms are not shrinking violets. These people are high-energy, high-ego people,” he said.

He described himself as a “pretty direct” person, telling the appellate commission, “I can’t tell you that I’ll never get a little upset, but I”ve been around long enough that I know how to keep things in check.”

Cullen, Loquvam, Neuberg and Teesdale were selected outright in the first round of voting. But Wilson and Megan Carollo, who owns a luxury floral arrangement business in Scottsdale, tied for the fifth and final spot, necessitating a re-vote.

Wilson was chosen on the re-vote largely because of two issues – the desire for geographic diversity and questions that Carollo’s interview raised among the commissioners.

The Arizona Constitution mandates that no more than two of the four partisan commissioners come from the same county, though that requirement doesn’t apply to the independent chair. Nonetheless, several commissioners said they wanted to ensure that not all five candidates were from Maricopa and Pima counties, which favored Wilson, a Coconino County resident.

Carollo’s interview did her no favors. When asked how she would handle the scrutiny that inevitably comes with serving as the independent chair, Carollo said she’s never been involved in politics and questioned how much there would be for people to scrutinize.

“I was actually warned about that and I didn’t really realize I kind of jumped into the deep end on this one, for sure,” she said.

Commissioner Kathryn Townsend said she came into Thursday’s meeting thinking that she would vote for Carollo as a finalist. But after hearing her interview, Townsend questioned whether Carollo had the mettle to chair the commission.

“What I was looking for in the interviews is, do I believe you can wrangle a room full of cats that are fighting with each other?” Townsend said. “I just did not believe from her interview that she’s got the personality that can keep order in chaos. I just don’t. That specifically is the candidate my mind was changed about as a result of the interviews.”

Several commissioners expressed concerns about Wilson as well, particularly with numerous allegations that he favored Republicans and wasn’t as independent as he said. Critics launched a campaign against him, writing the commission about incidents such as hosting an event for President Donald Trump in the parking lot of his gun store, as well as other GOP candidates.

Commissioner Ammon Barker, who also hails from Coconino County, said he was troubled that every public comment the appellate commission received about Wilson was negative, and questioned how the commission would look if it selected him.

“They’re going to question why we selected Robert Wilson when all the letters were against him,” he said.

Commissioner Gerald Nabours defended Wilson, who he got to know while serving as Flagstaff’s mayor. He called Wilson smart and data-driven. And he said Wilson would host any candidate at his store, regardless of politics.

“I know he did have the Trump bus stopped in there,” he said. “The Biden bus would be equally welcome.”

Perhaps the most controversial candidate was Nick Dranias, a former attorney with the libertarian Goldwater Institute. Opponents cast double on his independence, describing him as a conservative. Current and former Democratic lawmakers noted that he urged the U.S. Supreme Court to strike down a provision of the Voting Rights Act requiring states with histories of discrimination to get Justice Department approval for all voting and election law changes.

Another candidate who drew substantial opposition from Democrats was Anders Lundin, a retired attorney in Fountain Hills. Lundin recently wrote two letters to the Fountain Hills Times supporting Republican Congressman David Schweikert, and is affiliated with the conservative religious freedom advocacy organization Alliance Defending Freedom. Lundin was the only independent candidate to not receive any votes as a finalist.

On Tuesday, Democratic lawmakers and the Arizona Democratic Party criticized the appellate commission for only selecting eight minority candidates for interviews, alleging it had snubbed deserving applicants of color. During the public comment portion of the meeting, state Sen. Martin Quezada raised the issue, alleging “applicants of color have been mostly shut out of this process.”

Commissioner Linley Wilson later pushed back on those allegations. Wilson noted that eight of the 51 finalists selected for interviews, or 15%, identified themselves on their applications as non-white. Of the 113 applicants who listed their race or ethnicity – 25 didn’t check a box on that part of the application – 23 said they were non-white, six of whom were disqualified for reasons such not meeting voter registration criteria. That left 17 people of color from among 113 applicants, which also equaled 15% of the total candidate pool.

The commission disqualified three candidates on Thursday, one of them from the pool of independents. Mignonne Hollis, an independent, and Ken Strobeck, a Republican, were scratched because they’d been registered as lobbyists on behalf of their employers. The Arizona Constitution prohibits anyone who’s been a registered, paid lobbyist within three years of their appointment from serving on the IRC.

Democratic applicant Mumtaza Rahi-Loo was also disqualified because she’d been appointed as a justice of the peace pro tempore, which violated the prohibition on people who’d held public office within three years. The disqualification of Hollis and Rahi-Loo, both of whom are African American, further reduced the pool of minority candidates. 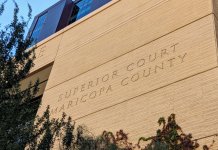 ABOUT US
Amplifying the voices of Arizonans whose stories are unheard; shining a light on the relationships between people, power and policy; and holding public officials to account.
Contact us: [email protected]or.com
FOLLOW US
© Arizona Mirror 2020
Adjust Font Size
MORE STORIES