WASHINGTON — Native American tribes are facing a dire situation from the COVID-19 pandemic, bringing some of them to a breaking point, American Indian health leaders told members of Congress Wednesday.

In many places, tribal leaders are scrambling to respond to disproportional illness and death in their communities. Confirmed COVID-19 cases among American Indians and Alaska Natives are 3.5 times higher than that of non-Hispanic whites, according to a recent study from the Centers for Disease Control and Prevention. The CDC looked at cases from 23 states that track racial data — but not Arizona, even though the state accounts for at least one-third of all Native American coronavirus cases. That’s because more than 30% of the state’s reported cases don’t include data on the ethnicity of the patient.

The Navajo Nation in northeastern Arizona was ravaged by COVID-19 earlier this year.

“The state of affairs in Indian Country remains dire,” Francys Crevier, CEO of the National Council of Urban Indian Health, said at the hearing held by a panel of the U.S. House Appropriations Committee.

There are 21 federally recognized tribal nations in Arizona. About 386,000 Arizonans (more than 5% of the state’s population) identify as American Indian or Alaska Native, according to the U.S. Census Bureau.

Kevin Allis, CEO of the National Congress of American Indians, a non-profit that gathers policy recommendations from American Indian and Alaska Native governments, called the situation in Indian Country a “national emergency.”

“Tribal leaders have reported to us that their nations, their existing systems of service delivery and infrastructure, are under a great deal of stress and are very close to reaching a breaking point, as they try to seek to maintain the status quo and increase essential government functions in response to COVID-19,” said Allis, who is also an enrolled member of the Forest County Potawatomi Community in northern Wisconsin.

“We may not have been able to prevent the outbreak of COVID-19 but we absolutely could have mitigated its worst impacts in Indian Country,” said Carolyn Angus-Hornbuckle, director of public health policy for the National Indian Health Board. “Tribal nations are battling a catastrophic disease without necessary funds and resources to protect and preserve life.”

Nationwide, American Indians die from COVID-19  at nearly 50 percent higher rates than whites, according to the COVID Tracking Project.

The group’s data for Arizona bears out the same disproportionate effect, but it’s likely underestimated because of incomplete data: The percentage of illness from COVID-19 among Native Americans in Arizona is 8%, and tribal members account for 12% of the state’s deaths.

And the Navajo Nation — which stretches across Arizona, New Mexico and part of Utah — declared a public health emergency Tuesday and issued new lockdown and curfew orders in response to an uptick in cases.

The Navajo Nation has 10,333 confirmed positive cases of COVID-19 and 55 deaths, according to the Navajo Department of Health.

Rep. Chellie Pingree (D-Maine) said lawmakers need to keep an eye on making sure health providers in American Indian Country have access to the eventual vaccine for COVID-19 and the infrastructure to store and distribute it.

“I am just worried with all the challenges, if and when we do have a vaccine, it is very important to make sure Indian Country is not left out,” Pingree said.

The $2.2 trillion CARES Act that Congress passed in March included $8 billion directly for tribes to pay for costs associated with the health response to COVID-19. But representatives from American Indian health groups told lawmakers yesterday that restrictions on spending have made it hard to use some of the funds.

Crevier of the National Council of Urban Indian Health said there has been confusion and too many restrictions on the spending. For example, she said it can help pay for COVID-19 tests but not necessarily the staff needed to administer the tests. And she said the administrative burden has been too heavy.

“We have to prove very strongly that we need this money, down to an orange or how much rice we provide,” Crevier said of food aid to high-risk seniors. “That amount of administrative burden is just way too much.”

The National Congress of American Indians has asked Congress for $20 billion more in coronavirus relief funds, as well as emergency appropriations with flexible conditions. The House and Senate have been at a stalemate for months on what should be included in the next round of COVID-19 relief, though talks are expected to continue on Thursday on a possible agreement.

The most recent proposal from House Democrats would provide $2.3 billion for tribal and urban Indian health organizations, according to Rep. Betty McCollum (D-Minn), the chairwoman of the Interior-Environment Appropriations Subcommittee.

“We have made some progress, but budget caps and sequestration have constrained our work and federal spending for Native programs still lags far behind,” McCollum said.

Rep. David Joyce (R-Ohio), the ranking Republican on the subcommittee, said he hopes lawmakers can “break the impasse” on the next round of coronavirus relief and provide more funding for tribes.

“We recognize COVID-19 has hit Indian Country disproportionately higher, the situation is dire, and additional funding is needed, not only to keep things functioning but to save lives,” said Joyce. 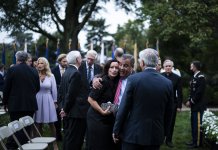