It was a day Erma Johnson had been dreading would arrive, the day when no criminal charges in the homicide case involving her son and an Arizona Department of Public Safety trooper will be announced.

“We are dying out here and it doesn’t have to be like this,” said the grieving mother at a press conference on Monday afternoon. She held in her hands several copies of the blue book that was handed out at her son’s funeral on June 12.

Johnson said that she still wants Cervantes to be arrested. Cervantes said he found Dion Johnson asleep in the driver’s seat of a car parked near an access ramp of a north Phoenix freeway just after sunrise on May 25 and shot him after he grabbed the trooper and reached for his gun while Cervantes tried to arrest him. Cervantes told investigators he was twice afraid for his life.

“Dion,” Erma Johnson said. “I’m angry, it hurts, and I just don’t know. … The system fails me, it fails my son, it fails Black people, it fails to protect and serve. How can you have confidence in officers that shoot and kill someone? And again, my son was asleep, he wasn’t harming nobody.”

On Monday, Adel said Cervantes acted in self defense. She said the evidence in the homicide case, which was investigated by the Phoenix Police Department, showed Cervantes was justified in using deadly, physical force.

“In Arizona a person is legally justified in using deadly, physical force if the person reasonably believed that force was necessary to protect their own life,” Adel said in a press conference. “Under our law in our state, if there’s any evidence to support a self-defense claim, then we as persecutors are required to prove beyond a reasonable doubt that the person did not act in self defense, and that is something that just cannot be done under the facts of this case.”

Adel said the evidence showed that Cervantes was attempting a lawful arrest of an impaired driver who was asleep at the wheel of his car, with a key in the ignition, while stopped on a busy freeway. While attempting the arrest, Adel said, Johnson resisted and fought with Cervantes. The trooper reasonably feared for his life, and shot and killed Johnson, she said.

“While this is a tragic outcome, criminal charges against the trooper are not warranted,” Adel said.

The morning of Memorial Day, Cervantes was patrolling on a motorcycle when he saw a car pulled over near the 64th Street exit of the Loop 101 freeway. According to The Arizona Republic, the Phoenix police investigation reported that Cevantes approached the car and opened the passenger door. He saw Johnson in the driver seat asleep, noticed a strong odor of alcohol and reported there were open containers and a handgun in the vehicle.

Cervantes removed the gun while Johnson was still asleep and secured it in his motorcycle bag. He then decided to call for backup and wait to make the arrest for driving intoxicated, Adel said. When Cervantes saw Johnson moving around in the car, he changed his mind and decided to make an arrest, worried that Dion would drive away.

Cervantes walked up to the car, opened the driver’s door and handcuffed Johnson’s left wrist, asking him to exit the vehicle. Cervantes’ account stated that Dion reached into the passenger seat where the handgun once was and had his body in a position where he could kick Cervantes into the traffic lanes. Cervantes took his service weapon from his holster and warned Dion twice that he’d shot him unless he stopped resisting.

Johnson relaxed and Cervantes was reholstering his weapon when another struggle started, according to the trooper. Johnson grabbed Cervantes’ vest and right hand, reached for the trooper’s gun and pulled him into the car. Cervantes said he again feared for his life that he’d be pushed into oncoming traffic. He fired twice at Johnson, hitting him once.

Adel said there “was substantial corroborating evidence” to support Cervantes’ account. She said at least two people who were driving in the freeway at the time called 911 to report an altercation and a trooper who appeared in distress. Two state employees who monitor the Arizona Department of Transportation traffic cameras also saw the events, Adel said.

Adel said her office didn’t treat this homicide case differently because it involved a member of the law enforcement community.

“Officers do not get a greater benefit of doubt than any other person facing criminal prosecution,” she said. “No matter who you are, no one, what job you have, if you commit a crime in our county, you will be held accountable.”

That’s not what national data on prosecution and conviction of fatal shootings involving police show. According to a Washington Post analysis, a small fraction of police who shot and killed people face criminal charges, and murder convictions are rare.

Cervantes has over 15 years of experience at DPS and has been on administrative leave since shooting and killing Johnson. DPS is still conducting an internal investigation of Cervantes.

Jocquese Blackwell, an attorney for the Johnson family, said Adel was wrong to base her decision not to charge Cervantes on a “one-sided story.”

Blackwell said the family will file wrongful death lawsuits with DPS, the emergency medical services that responded to the scene, and the City of Scottsdale, which also had a police officer arrive at the scene of the shooting.

As a national movement has strengthened to address police violence that continues to disproportionally take the lives of Black Americans, Blackwell said people in positions of power like Adel have to do better.

“For our country to move forward, in the case like Dion Johnson’s case, we have to stop giving police officers all these benefits of the doubt,” Blackwell said. “Where we are right now is not working for us. It’s not working for people who look like me, a person who got beat up by a cop when I was a kid.  When you look like me, you get beat up, you get killed and your mom and dad is worrying about what happened to my son.

Will Knight, an attorney and former Democratic candidate for county attorney, spoke on behalf of Mass Liberation Arizona, a group that pushes for criminal justice reform. Knight said Adel was using “rhetoric” when stating that police are treated like any other member of the public.

“We are never going to have equal protection under the law. Those things will always remain rhetoric until we have equal application under the law,” he said. “We don’t have that right now because I have seen my Black and brown clients charged with homocide, charged with manslaughter, charged murder for less evidence than what’s available in this case with Cervantes.”

“I recognize the injustices that continue to reign supreme when it comes to our Black sons and daughters being criminalized, demonized and harassed, and their behavior exaggerated to the point where it tries to justify this reckless and irresponsible behavior by Cervantes,” she said, as she embracing Dion’s mother to her side.

Wood and other speakers brought up Cervantes’ disciplinary record, which registered nine external and internal complaints since 2010. Cervantes was found to have used his state-issued stun gun on a puppy at least three times, and had left a harassing note on his romantic partner’s vehicle.

“A dog is worth a taser but a Black man needs a gun. … I do not accept this. This must cease. Enough is enough. Justice for Dion and no justice, no peace,” Wood said.

Julie Gunnigle, the Democrat who is running to unseat Adel in November, apologized to Erma Johnson at the press conference.

“You, your son, and your family deserve so much better,” Gunnigle said.

She said if elected, she won’t have prosecutors who typically collaborate with law enforcement agencies in criminal cases review police use-of-force cases.

“When cases involving officer use-of-force arrive at the office, when I’m elected, they will have a transparent process, it will be community-involved and it will be independent from the line prosecutors who handle street crime cases day-in and day-out,” Gunnigle told Arizona Mirror.

Though she was critical of Adel’s decision to not charge Cervantes, Gunnigle wouldn’t make any promises regarding Dion Johnson’s case if she’s elected.

“There is a lot prosecutors shouldn’t promise without a full review. … There is nothing that is being promised and it would be inappropriate to do so,” she said. 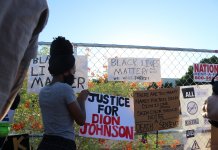 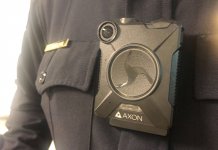