Joe Biden holds a small lead over President Donald Trump in the latest poll of Arizona voters thanks to broad support among Latino voters and a nearly double-digit advantage in Maricopa County, giving Democrats their best chance in nearly 25 years to win the Grand Canyon State’s electoral votes.

The Monmouth University Poll finds Biden, the Democratic nominee, leading Trump 48% to 44% among registered voters. If turnout among voters who say they are likely to vote in November is greater than it was in 2016, Biden’s lead narrows to two points, 48% to 46%. And if likely voters show up at a lower rate than they did four years ago, the race is a dead heat at 47% for each candidate.

A Democrat hasn’t won in Arizona since 1996, when the state voted to re-elect Bill Clinton.

Trump’s biggest struggles are in Maricopa County, home to about 60% of Arizona voters. Although he won the historically Republican county by about three percentage points in 2016, Trump trails Biden by nine points, 41% to 50%, in the Monmouth poll.

“Both candidates are solidifying their support in the most partisan areas of the state, but the big prize is still Maricopa County. And we see a notable swing away from Trump there compared to four years ago,” said Patrick Murray, director of the independent Monmouth University Polling Institute.

Trump is trailing especially badly among voters who don’t identify with a political party and women. Independent voters favor Biden by 22 points, 53% to 31%. The margin is nearly as large among women voters, who split 55% to 37% for Biden.

And although the Trump campaign is making entreaties to Arizona’s Latino communities, the president is broadly disliked among those voters. Biden is the top choice for 63% of Latinos, and only 33% say they plan to vote for Trump. Exit polling in 2016 showed Latinos similarly chose Hillary Clinton over Trump by a 30-point margin.

“The Latino vote will be crucial to Biden’s chances of flipping this state. At this point, it seems more about turnout rather than his margin of support. Latinos make up a larger share of Arizona’s voter roll than four years ago, but the question is how many will show up?” Murray said.

In the Senate contest, Kelly holds a wide lead over McSally among independent voters, 60% to 33%. And in Maricopa County, his eight-point lead (51% to 43%) is similar to Biden’s lead over Trump.

While voters generally have a favorable opinion of the former astronaut Kelly — 48% favorable compared to 29% unfavorable — opinions about McSally are split. The incumbent, who was appointed to fill out the term of the late John McCain after losing a Senate race in 2018, is viewed favorably by only 40% of voters and unfavorably by 42%.

“Kelly is simply well-liked by voters and McSally already has a recent loss under her belt. The advantage of her appointed incumbency seems to be providing limited benefit,” Murray said.

The live-caller poll of 420 registered voters in Arizona was conducted Sept. 11-15 via landline and cell phones, and interviews were conducted in both English and Spanish. The poll has a margin of error of +/- 4.8 percentage points. Monmouth University is one of only six pollsters to have an A+ rating from FiveThirtyEight, a website that focuses on opinion poll analysis. 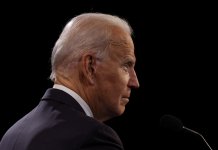 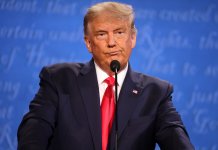