Ducey lays out how Arizona gyms and bars will reopen

Businesses that Gov. Doug Ducey ordered closed in response to the worsening COVID-19 crisis now have a light at the end of the tunnel after the state set out public health benchmarks that would allow them to reopen.

Bars, gyms and other businesses that have been closed since late June won’t yet be able to reopen. But the state has now determined the metrics that will determine when it is safe for businesses in each county to begin phased reopenings. In Arizona’s two largest counties, that day may be only a couple weeks away, according to Arizona Department of Health Services Director Cara Christ.

The framework, which the Ducey administration unveiled on Monday, is similar to the benchmarks established last week for schools to determine when it’s safe to begin in-person instruction.

Three county-by-county metrics will determine when and under what circumstances the closed businesses can reopen: the percentage of all COVID tests that come back positive, the number of cases per 100,000 people, and the percentage of hospital visits that are for COVID-like illnesses.

The benchmarks ADHS established for business reopenings are:

If a county has substantial community spread, bars, gyms and other businesses subject to the governor’s executive orders must remain closed. Counties must meet the benchmarks for moderate spread, the second tier, for two consecutive weeks before the affected businesses can open.

The new guidelines will also comply with a Maricopa County judge’s ruling that ordered the state to create a process. A judge this month rejected Mountainside Fitness’s request to overturn Ducey’s order closing gyms, but said the governor must provide gyms with an opportunity to apply for permission to reopen. 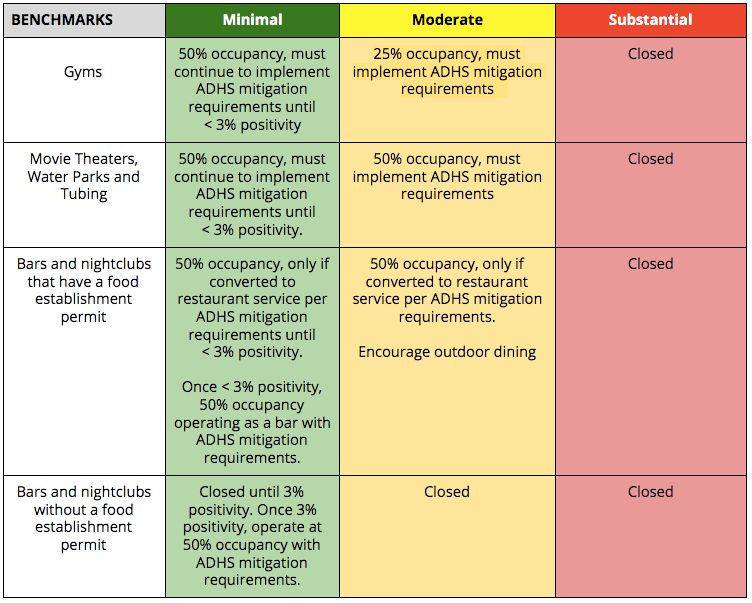 Bars that have series 6 or 7 liquor licenses — the two types affected by Ducey’s closure order — can remain open if they have historically operated as restaurants, a determination that is up to the Arizona Department of Liquor Licenses and Control. Those that have historically operated as bars but have county-issued food licenses can reopen under the criteria established by ADHS.

Those bars that don’t serve food, such as the Scottsdale nightclubs that notoriously flouted Ducey’s original closure order from March, which went mostly unenforced, won’t be able to reopen until all three metrics reach the minimal community spread phase, with testing positivity below 3%.

It’s unclear when those businesses will be permitted to operate at full capacity. Christ acknowledged that zero transmission of the novel coronavirus may be an impossible standard to meet, and said full reopening could be dependent on the creation of a vaccine or cure for COVID-19.

Once a county meets the thresholds for the affected businesses to reopen, those businesses must fill out a form on the AHDS website attesting that they’re following restrictions and taking precautions such as physical distancing and masking to prevent the spread of COVID-19. Once a business in a county that no longer has substantial community spread of the virus has submitted that attestation, reopening is automatic.

Because businesses have attested to the state that they’re following the guidelines, ADHS can swiftly shut down any business that isn’t complying.

There is an avenue toward earlier reopening for businesses whose counties don’t meet the benchmarks. They can seek an informal settlement conference and plead their case to ADHS. For example, bars with series 6 or 7 licenses that serve food but haven’t historically operated as restaurants could ask ADHS for permission to reopen in advance of the benchmarks.

“What we’re looking to do now is give a pathway to those series 6 and 7s that have not traditionally operated as a restaurant but have a county-issued food license and want to convert to those operations,” Daniel Scarpinato, Ducey’s chief of staff, told reporters during a press briefing on Monday.

ADHS will hold informal settlement conferences within 15 days of a request, meaning businesses hoping to get around the benchmarks might simply have to wait until the COVID-19 situation improves in their counties. For some counties, that could be within a couple weeks.

“We think, just based on the trends, in the next couple of weeks Maricopa will be in the moderate zone, if the trends continue the way they are,” Christ said during the press briefing, later adding that Pima County may be ready even sooner.

Some counties are already in a position to begin reopening. Yavapai and La Paz counties have all three metrics in the moderate zone, while several others are close, according to a business data dashboard on ADHS’s website.

There are a couple of differences in the metrics for schools and businesses. Schools have an alternate benchmark they can use instead of cases-per-100,000 people. If that number is above 100 but has decreased for two consecutive weeks, a county meets the criteria to end online-only instruction. That option isn’t available to businesses.

Ducey lays out how Arizona gyms and bars will reopen