During the COVID-19 pandemic, CDC guidelines recommend social distancing, hand washing and remaining at home whenever possible. But for most people experiencing homelessness, such recommendations are impossible to follow.

This was part of the reason Maricopa County opened up three dedicated sleeping spaces for the large concentration of unsheltered homeless people between downtown Phoenix and the state Capitol complex.

A variety of social service agencies like the Central Arizona Shelter System, the Human Services Campus and the André House operate nearby. As a result, the area, directly adjacent to city and county administrative buildings, has grown into one of the largest tent cities in the Valley, and is now home to between 200 and 500 people.

But it would appear that Maricopa County and the City of Phoenix have very different ideas about the intention of the newly opened lots and how they should be operated, creating confusion and revealing administrative divisions between Maricopa County and its largest city.”

The sleeping spaces are asphalt lots surrounded by chain-link fences. They are unshaded, so people living there are exposed to direct sunlight. The lots, guarded by armed security, also have port-a-potties, hand washing stations and potable water—amenities largely unavailable on the street. Staff from the Human Services Campus also visit the lots.

But can what is essentially a parking lot with basic amenities be considered a shelter? Not according to the county and the Human Services Center, which operates the lots.

“It is a safe place where people who are camping can voluntarily relocate,” said county spokesman Fields Moseley

But ask the City of Phoenix and you will hear a very different answer.

“It does qualify as a shelter space,” city spokeswoman Tamra Ingersoll said. The people living on the lots “are connected to case management and with provided services of water and bathrooms and designated space,” she said.

Conflicting messages between state and local governments create conditions ripe for confusion. Many of the people staying at the lots expressed disbelief that the space was considered a shelter by the city. Signs posted by the county on the lots’ chain-link fences indicate that the lots are only temporary and are not shelters.

Ash Uss is the advocacy and partnerships coordinator at the André House, one of the many service providers in the area where people experiencing homelessness can eat, shower and make phone calls.

“You can tell that the county and even the Human Services Campus … felt kind of taken advantage of because they never referred to those lots as shelter,” said Uss.

“All the signage says … temporary outdoor space,” said Uss. “It was never supposed to be any sort of shelter.”

Another discrepancy between the county and the city is whether moving onto the lots is voluntary, or if people experiencing homelessness can be ticketed if they choose to remain on the street.

A 2018 ruling by the 9th Circuit Court of Appeals banned police from ticketing or arresting people for sleeping in public when there are no alternatives to shelter.

But according to Uss, the city is using the lots as a “loophole” around the ban.

“Anytime (police) would tell someone to get lost, they couldn’t actually move them because they didn’t have enough shelter options,” she said. “The lots provided a mechanism for them to be able to say, ‘You need to go and move because we’re offering you a bed,’ which is a loophole around the … ruling.”

That’s what happened to Elisheyah Riley, used to camp nearby before moving onto the lots in May. She said she was told by a Phoenix police officer that she would be cited if she didn’t pack up and get onto the lot.

But according to the agencies that run the space—Maricopa County and the Human Services Campus—the lots were meant to provide people experiencing homelessness the option to socially distance, not as a means to forcibly relocate people on the streets.

Amy Schwabenlender, the executive director of the Human Services Campus, said when the lots were first being opened, “city employees or police officers were telling people ‘You have to go down to one of those parking lots, you can’t be here you have to move.’”

In an email, a Phoenix Police Department spokesperson acknowledged officers told people to move onto the lots, but denied that officers cited anyone for refusing to relocate.

The three lots, which have 12-by-12 squares painted in them to aid in social distancing, have a capacity of about 200 people—not enough to accommodate all campers in the area.

According to Schwabenlender, people began to line up to stay in the lots—many because they thought they had to.

“All of the sudden, we had this influx of people we had asked about voluntarily moving, who just started walking down there and lining up,” she said.

The Human Services Campus and the county had planned to prioritize the space for vulnerable populations—the elderly and people with underlying health conditions. But because police had indiscriminately told people in the area they must move onto the lots, the plan “did not happen that way,” said Schwabenlender.

Some people seeking a space on the lots were turned away, she said.

Uss, from the André House, calls the situation “shameful” and fears that the actions of the city and police could exacerbate the worsening homelessness situation in Phoenix. 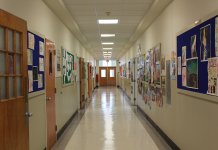 Is a parking lot a homeless shelter? Yes, according to City of Phoenix