For the first few nights of protests in downtown Phoenix, Michael Case watched from home as people broke windows and police lobbed at tear gas at marchers.

“I didn’t really want to be a part of that, because violence doesn’t do anything. We’ve seen that, time and time again,” Case said.

On Thursday, he marched for the second night in row as more than 1,000 people gathered in downtown Phoenix to protest the death of George Floyd, an unarmed black man whose death at the hands of a Minneapolis police office who knelt on his neck for nearly nine minutes set off a nationwide shockwave of demonstrations against police violence toward minorities.

Another name on the lips of many protesters was 28-year-old Dion Johnson, whom a Department of Public Safety officer shot and killed on May 25, the same day Minneapolis police officer Derek Chauvin killed Floyd. Thursday’s protest came one day after Johnson’s family held a press conference demanding justice and for the trooper’s name to be released. The family had viewed a video of the shooting earlier in the day, which Johnson’s mother called, “the most horrific thing I’ve seen as a mother.”

For 17-year-old Thessalonian Peterson, Thursday was the first night he marched. It was, in fact, the first time he’d ever taken part in such a protest. Before, he’d never been old enough to go out and do something like that.

“I just really felt like it’s a movement that I really should have been a part of,” Peterson said as he walked down Jefferson Street. “Now, I can finally go across town and really use my voice for something good.”

After an initial weekend of protests that featured destruction of property and dozens of arrests, the demonstrations have remained calm. In response to looting at Scottsdale Fashion Square Mall on May 30, Gov. Doug Ducey imposed a curfew running from 8 p.m. to 5 a.m. that lasts until June 8.

Thursday’s protest ended at First Avenue and Jefferson around 7:30 p.m., following 8 minutes and 46 seconds of silence to honor Floyd – the length of time that Chauvin knelt on his neck.

A police officer at the scene said he wasn’t aware of any arrests, which would mark the fourth straight day of protests in downtown Phoenix with no arrests. After the march ended, several hundred people remained in front of the Maricopa County Superior Court building. Around a quarter to 8 p.m., police declared the scene an unlawful assembly and ordered the crowd to disperse, which it did without incident.

One protester, who would only give his first name, Cole, said there was a different feeling on Thursday than even two days earlier, when he first joined the march.

“At 7:30, they turned the speakers on, started telling everyone you’ve got to go home, chasing us around. There were way more barricades, I felt like,” Cole said, shortly before officers warned the remaining marchers to clear the area.

The Phoenix Police Department was out in full force as the crowd marched past the Burton Barr Public Library on Central Avenue, and several dozen officers in tactical gear lined the east side of the thoroughfare. The crowd stopped in front of them – organizers stopped repeatedly throughout the march, giving people a chance to rest in the 100-plus degree heat – which led officers to cordon themselves off behind yellow police tape.

Some protesters harangued the officers, others flashed peace signs, and many others chanted Floyd and Johnson’s names, along with other slogans. The crowd cleared a space for one of the organizers, who told the protesters, “We don’t want to give them no reason” to take any action against the demonstrators.

The march began across the street from Phoenix City Hall, where people gave out free pizza to hungry protesters while organizers from the We Rising Project energized the crowd. Jazlyn Geiger, one of the organizers, repeatedly emphasized the need to keep the protest peaceful, and implored marchers to ignore anyone promoting antagonistic tactics. Geiger said several friends were arrested in an earlier protest, and she decided to take charge the next day.

“Only listen to those who are spreading messages of peace and love,” she said.

Geiger told reporters that people haven’t wanted to go home at 8 p.m. following previous marches “because they didn’t want to feel like they were giving in to these new rules.”

Geiger said protest organizers plan to keep the marches going through the weekend, and even plan to bring them to other cities across Arizona. 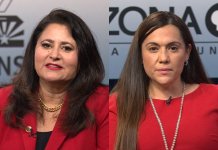 Arizona never elected a Latina to statewide office until 2020, when it elected two 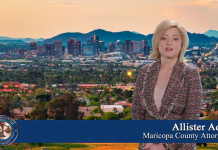