An attempt by Maricopa County Recorder Adrian Fontes on Friday to address coronavirus fears by mailing early ballots to all registered Democrats who didn’t already request one for the March 17 presidential preference election was blocked by a judge.

Fontes said early Friday that his office would be mailing ballots to remaining registered Democrats who are not on the early voting list, four days before the Arizona Democratic presidential primary, to protect the health of the voters and staff amidst the fear surrounding the coronavirus, which causes the COVID-19 illness.

“We are in uncharted territory with COVID-19,” Fontes said in a tweet. “My first concern is to protect the health of the voters and staff who work in the polling places while maintaining the integrity of the election. I am sending ballots to remaining voters today.”

His decision sparked backlash from state officials, including Brnovich, who immediately went to court to stop Fontes from mailing the ballots.

“Sending out unauthorized ballots will create voter confusion on the eve of an election and could result in voters attempting to vote ballots that are not lawfully authorized,” the temporary restraining order read.

Secretary of State Katie Hobbs also informed Fontes in an email that she understands his concerns, but informed him that he does not have the legal authority to mail ballots to voters who are not part of the early voting list.

“As you know, I fully agree with you that authority for counties to conduct all-mail elections is good policy, and certainly an appropriate contingency plan in the event of a public health emergency like this. Unfortunately, it is not currently authorized by the law,” the email read.

Confirmed. @SecretaryHobbs is against @RecorderFontes on his decision to mail non PEVL Democrats. This is part of an email she sent him this afternoon. pic.twitter.com/MdVGjmE37t

Hobbs told him that she is working with legislators to find a way to address the worries of voters and to authorize an all-mail election.

But Fontes disagreed, saying in a press conference that the Recorder’s Office has the authority to mail the ballots to voters, especially in a time of emergency. The coronavirus pandemic meets that criteria, he said.

It all started when the Maricopa County Recorder’s Office emailed poll workers that 78 planned polling stations were being closed because elections officials couldn’t procure enough cleaning supplies to properly disinfect them.

The number of polling stations went down from 229 to 151, and Fontes said that the number is expected to continue dwindling by Election Day on Tuesday. He said his plan would quell coronavirus fears and lower the chances of contact, while allowing voters to cast their ballot.

The Maricopa County Board of Supervisors, which oversees Election Day voting, urged voter turnout on Tuesday and said it is taking all appropriate measures to ensure a safe environment for voters and volunteer poll workers.

Fontes said that if the court allows the Recorder’s Office to mail the ballots, voters should receive them on Monday or Tuesday. They will then be able to drop them off at polling stations at designated drop-off bins to comply with health officials who recommend social distancing between voters and staff.

On March 11, the county announced that five Phoenix-area polling places were being moved from senior living facilities to other locations. The coronavirus and COVID-19 appear to be particularly dangerous to the elderly, and a nursing home in Washington has become that state’s epicenter for the illness.

The four states voting on Tuesday – Arizona, Ohio, Illinois and Florida – all confirmed they will not delay their election, despite fears of the coronavirus spreading. Meanwhile, Louisiana decided to postpone its April primary election to June. 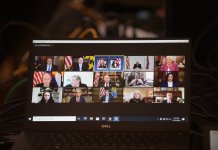 Biden promises ‘no national shutdown’ despite surge in COVID-19