State legislators are letting down Native American students in Arizona. In my four years as director of Indian education at the Arizona Department of Education, I requested state funds for the Office of Indian Education every year. The goal was simple: Improve the access and quality of education for every Native American student, teacher, aide and community in the state.

Not once did the GOP-led legislature approve our request. Instead, my government-funded office was forced to collect private donations just to meet the basic requirements of state law. Although improvements were made, without state funds we could not implement in-depth programs to serve 22 tribes, nearly 56,000 Native American students, and their educators and families.

Native American students achieve at the lowest rates academically, but not because of an inability to learn. These rates can be attributed to the state’s failure to provide what these students need to succeed. Arizona currently ranks 46th in per pupil spending; in 1960, it was ranked 19.

Rather than relegating the education of our students to private schools and schools in other states via tax-supported vouchers, our legislature should meet its obligation to ensure that Arizona’s students, including Native American students, can access a good public education in every community, whether they live in Scottsdale, San Carlos or Window Rock.

I recently heard a state senator passionately claim that the latest voucher expansion legislation is not about money. However, it takes money to meet student needs. All failing schools need funds to recruit and retain highly qualified teachers, purchase quality curriculum, updated materials and supplies, and more.

Some reservation families take children to a closer out-of-state school to avoid a two-hour bus ride to attend school in Arizona. Does that justify expanding vouchers and subsidizing private schools? No. It means the state needs to focus on providing good public schools and safe public roads in these Arizona communities.

Indigenous students have many disadvantages, especially in high-density schools – those schools whose indigenous students make up at least a quarter of their total enrollment. In Arizona, more than half of all Native students attend schools that are at least a quarter Native American in overall population. Of K-12 schools in Arizona with a grade of D or F, nearly 16% have this high percentage of Native American students. It’s significant that most of the teachers in our schools are not themselves Native American, which leads to high turnover because there’s often little or no understanding of cultural needs and values. Misconceptions can lead to unintended consequences that aren’t good for students. Other key contributing factors to low academic achievement are high community poverty, historical trauma, and generational loss of traditional language and culture.

Many Indigenous families do not know how to advocate for their children in a non-Native structure and must be educated and empowered to do that with confidence. Even that takes funding because it requires administrators, educators and schools to invest in the time and resources to help parents. But with median teacher salaries at 49th in the country and the second most crowded classrooms in the country, how is that supposed to happen?

Private school vouchers known in Arizona as “Empowerment Scholarship Accounts” (ESA) which give tax dollars to individual parents to subsidize private, often religious schools amount to $110 million per year being diverted from public schools. ESA voucher costs went from $1.6 million in 2012 to $80 million in 2018. How long can this trend be sustained? In contrast to public schools, private schools have no academic requirements, do not have to follow federal laws, including disability rights laws, and frequently decide which students to accept and which to reject. The impetus for teachers in these private schools to learn or respect Native culture is very low.

As of 2018, Arizona spent 75 percent more per student subsidizing private school enrollment: $10,700 for private schools compared to $6,000 for district schools. Instead of spending taxpayer dollars on ESAs and tax credits, we need to provide Arizona’s public schools with the essentials so that no Arizona family has to leave their own community school to find a great, appropriate education. If it is truly about Native American children, Arizona should focus on improving neighborhood public schools, not exploiting our challenges to promote more private school vouchers. 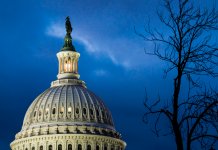 Congress preps for next COVID-19 relief bill, focused on infrastructure