Arizona will be one of the first of 11 states to receive a new federal coordinator with the U.S. Attorney’s Office that will help with cases of murdered and missing indigenous women and girls as part of a new federal task force.

The task force and coordinators were authorized Tuesday by an executive order by President Donald Trump.

Earlier this year, Arizona started its own task force, a study committee dedicated to examining the growing issue of murdered and missing indigenious women and girls cases, often referred to as MMIWG cases.

House Bill 2570, introduced by Rep. Jennifer Jermaine, D-Chandler, was signed into law in May. Under the bill, the committee will submit a detailed report to Gov. Doug Ducey and state legislators.

“I am happy to see the executive order on missing and murdered American Indians and Alaska Natives,” Jermaine said in a statement to Arizona Mirror. “I commend Chairman Timothy Nuvangyaoma from the Hopi tribe on his national leadership on this topic and work with the White House over the last year.”

The executive order establishes the “Task Force on Missing and Murdered American Indians and Alaska Natives,” which will be co-chaired by the attorney general and the secretary of the interior or their designees.

Also on the task force will be the director of the FBI, members from the Bureau of Indian Affairs, the Office on Violence Against Women and the Department of Health Services, as well as other branches of the federal government.

Funding for the task force will come from the U.S. Department of Justice.

The task force has a few different key areas it appears to be trying to address, including communication.

“[I]mproving the way law enforcement investigators and prosecutors respond to the high volume of such cases, and to the investigative challenges that might be presented in cases involving female cases,” is one of the main areas of focus for the task force, along with finding better ways at “collecting and sharing data among various jurisdictions and law enforcement agencies.”

The task force also hopes to clear things up in regards to the differing roles that each jurisdiction plays in investigating MMIWG cases, something that Arizona’s study committee has discussed already.

During the committee’s first meeting in September, victim advocate Valaura Imus-Nahsonhoya pointed out that many tribes have differing criminal codes, some even have no laws to deal specifically with sex trafficking, she said.

Investigating crimes of violence against Native women can then be complicated by the severity of the crime.

Depending on the severity, tribal police may be able to investigate themselves or they may have to notify the Bureau of Indian Affairs or the FBI.

As the Mirror has previously reported, the Murder Accountability Project found that one in three murders of Native Americans in Arizona go unreported to the FBI.

Imus-Nahsonhoya said that many tribes have been trying to share data with FBI and other systems, but lack the infrastructure or funds to implement the necessary changes to make the systems work.

The new federal task force calls for creating formal agreements and arrangements to “promote maximally cooperative, trauma-informed responses to cases involving missing and murdered American Indians and Alaska Natives,” but it is unclear what that will look like in the long term.

Education will also be a part of the new task force, which plans to create an outreach campaign aimed at identifying and reducing crimes related to MMIWG cases.

In two years, the task force will submit a final written report that will suggest policy guidance.

The task force could end up helping Arizona’s study committee, which at its last meeting in October voted to begin sending federal Freedom of Information Act requests regarding data on MMIWG cases. 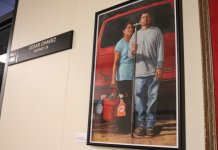