Navajo Generating Station is closing, and that means an enormous amount of water is up for grabs, a situation that will lead to either a new settlement or more legal battles over the future of the water.

Multiple sources told the Arizona Mirror that the future of the water formerly used to operate NGS, which will shut down in December, is uncertain. But the Navajo Nation has claimed it, along with the rest of Arizona’s water from the Upper Colorado River Basin. Navajo Nation legal counsel said the history of discussions around the water that was used at NGS indicates that the water belongs to the Nation.

Multiple other entities could also lay claim to the water, including the Hopi Tribe and several nearby municipalities.

The water in question is the lion’s share of Arizona’s allotment from the Upper Colorado River Basin: 34,000 acre-feet per year, currently being drawn from the river via Lake Powell. That’s enough to satisfy all of the municipal and industrial uses for all of Pinal County, according to Sarah Porter, director of Arizona State University’s Kyl Center for Water Policy.

“That’s a tremendous amount of water. … It’s potentially a settlement that would enable whoever gets the water, whether it’s one of the tribes or both (the Navajo Nation and Hopi Tribe), to realize revenue from that water” by leasing it to another entity, Porter told the Mirror. She pointed to the City of Page, which already gets its municipal water from Lake Powell as well.

An acre-foot of water is enough to serve the needs of a family of five for five years, according to the Arizona Department of Water Resources.

Although 34,000 acre-feet was set aside for NGS, the plant uses only about 20,000 acre-feet to operate per year as steam for its generators and for cooling. NGS has not come close to using all of that 34,000 in recent years, particularly as its December shuttering approaches.

An attorney for the Hopi Tribe did not rule out a claim to the Upper Basin water.

“The Hopi have traditionally claimed an interest in Colorado River water based on their aboriginal title in lands,” said Colin Campbell, a hired attorney for the Hopi Tribe. “Obviously the fact that the water is becoming available has piqued a lot of people’s interests.”

Who decides the rights?

The rights to the water will be decided through either settlement or adjudication by a judge.

A settlement would involve an agreement between the State of Arizona and the Navajo Nation, which would then need congressional approval. Utah and the Navajo in 2016 reached a settlement regarding the Nation’s rights to upper basin water in that state. Under that agreement, the Nation will receive 84,000 acre-feet of Utah’s unused allocation. U.S. Sens. Kyrsten Sinema and Martha McSally of Arizona co-sponsored a bill this year with Sen. Mitt Romney, R-Utah, that would make that settlement federally recognized.

The other possibility is that multiple parties will put forward competing claims to the water. If that happens, the water will end up in an adjudication process in federal court, according to multiple sources who spoke to the Mirror.

The Little Colorado Stream Adjudication is one example of this process. The Navajo Nation, the Hopi Tribe, the State of Arizona, the federal government and many non-tribal communities in Arizona have all laid claim to waters in the Little Colorado sub-basin. The adjudication of these claims has been ongoing in the Maricopa County Superior Court for 41 years.

A representative for the U.S. Bureau of Reclamation, which manages water resources in the U.S., including in the Colorado River basin, and manages the federal government’s 24-percent ownership stake in the plant, said that it’s too early to say what an adjudication over the water would look like.

“Disposition of these water rights could be addressed in a number of judicial or other forums,”  said Robyn Gerstenslager, a spokeswoman for the Bureau of Reclamation. Were there to be an adjudication, it is too early to “identify or define what that forum or process might be.”

The difference between water rights claimed by the Hopi Tribe and the Navajo Nation boils down to differences in how the two reservations were created. The current Hopi reservation is on the tribe’s ancestral homeland, but this is not the case for the Navajo.

The Hopi Tribe has in the past cited a 1905 U.S. Supreme Court ruling, U.S. v. Winans, that set out some of the rights of tribes occupying the same homeland since before the United States took possession of the land. Under that ruling, some tribes have the right to certain off-reservation resources they’ve been using since “time immemorial.”

This is different than the water rights articulated by the federal government for communities like the Navajo Nation, which does not occupy its people’s ancestral homeland. In the 19th century, various tribes across the Southwest were concentrated in the present-day Navajo reservation. The Supreme Court’s 1908 ruling in Winters v. U.S. stated that in creating the reservations, the federal government implicitly agreed to supply them with an appropriate amount of water.

Under Winters, water rights claims by American Indian communities are given priority according to the order in which the reservations were created. The Hopi’s claims under the “time immemorial” clause from the Winans case predates many other communities in Arizona, as several, such as the Navajo and the Apache tribes, were forcibly relocated to their present-day reservations.

Furthermore, the Hopi Tribe has claimed in the Little Colorado Stream Adjudication that as a result of the U.S. government’s drawing of the reservation — which is completely surrounded by the Navajo reservation — the Tribe is entitled to water rights off-reservation to fulfill the federal government’s obligation to provide adequate water when creating the reservation.

Where did the water come from?

The water used by NGS comes from the 50,000 acre-foot allotment from the Upper Colorado River Basin.

The Upper Colorado Basin Compact of 1948 gave Colorado, New Mexico, Utah and Wyoming each a share of the upper basin’s 7.5 million acre-feet. Arizona, which has a very small portion of the upper basin in the northeast corner of the state, was allotted 50,000 acre-feet.

Thus, the vast majority — 2.8 million acre-feet per year — of Arizona’s Colorado River water comes from the lower basin, as Arizona is mostly a lower basin state. Most of Arizona’s upper basin water since the early 1970s has been set aside for NGS.

Multiple exerts and stakeholders in NGS told the Mirror that there is a long-standing interpretation of the Colorado River compacts, or the “Law of the River,” that prevents upper basin water being used in the lower basin, and vice versa.

State and federal law, and several resolutions passed by the Navajo Nation Council, set aside 34,000 acre-feet explicitly for the operation of a coal-fired power plant somewhere in the upper basin.

The remainder of the 50,000 acre-feet is used for other purposes, including as the municipal water supplies for both the City of Page and the nearby Navajo Chapter of LeChee. 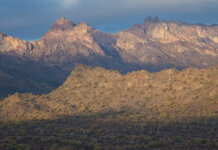