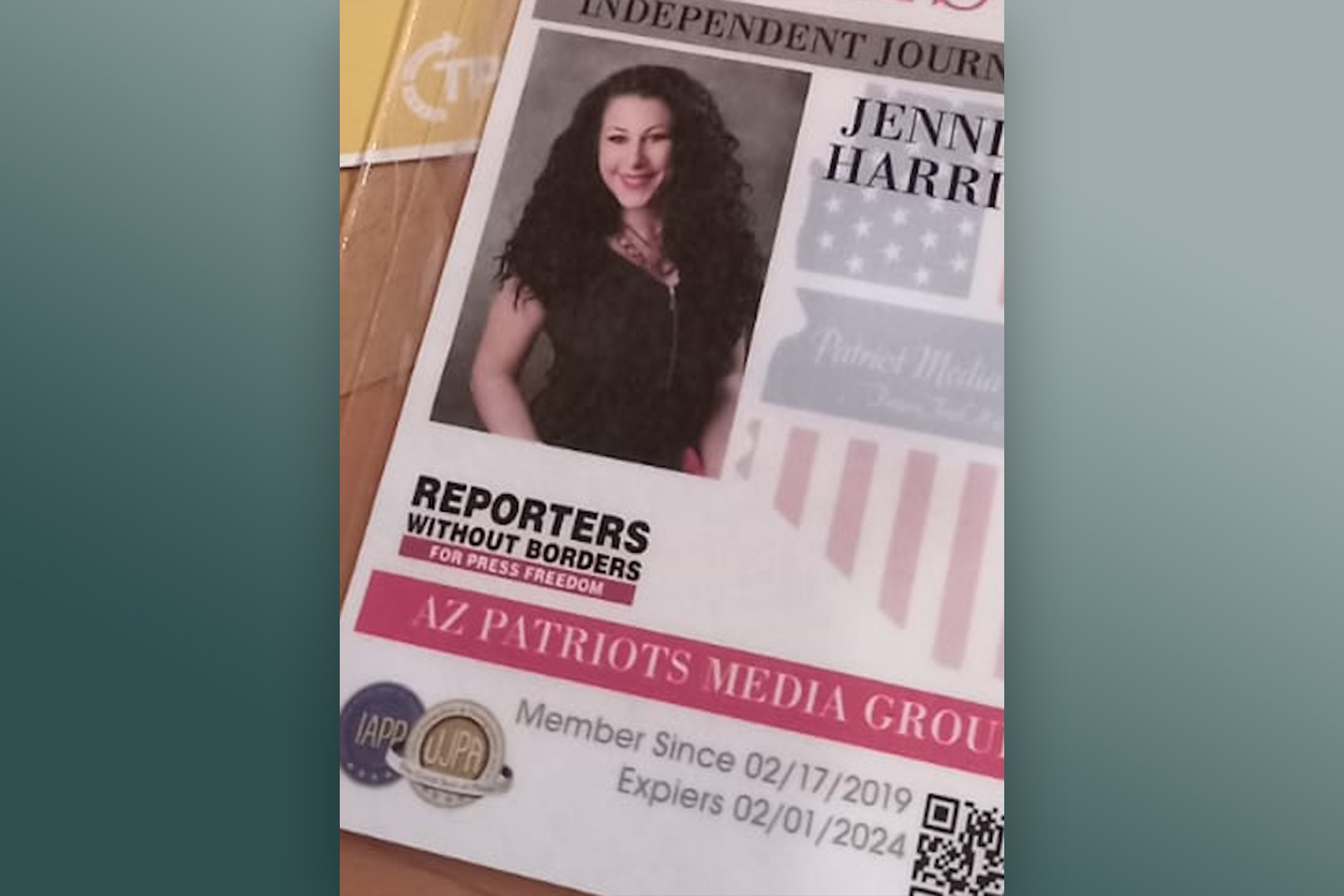 The leader of the right-wing extremist group AZ Patriots, Jennifer Harrison, appears to have used fraudulent press credentials when she attended a conservative event at Grand Canyon University earlier this month.

“AZ Patriots Media. Not fake news!” Harrison wrote in a since-deleted tweet. It was accompanied by four pictures of Harrison and others from her organization, including one photo of her press credentials.

That photo showed two press passes given out by TPUSA and one that appears to have been created by Harrison herself.

The pass includes the logos of three journalism organizations:

“This woman, ‘Jennifer Harrison,’ is unknown and not a member of our organization,” Peter Wagner with UJPA told Arizona Mirror. “The card shown (is) a fake.”

Reporters Without Borders responded to an inquiry by the Mirror on Twitter stating that Harrison is not affiliated with their organization.

“We’re not sure what our logo is doing on her press pass,” the organization said on twitter.

Hi @JerodMacEvoy, thanks for bringing this to our attention. Jennifer Harrison is not affiliated with @RSF_en, we’re not sure what our logo is doing on her press pass. Please let us know if you ever happen to come across something like this again. Thanks!

IAPP has not yet responded to a request for comment.

Harrison told The Arizona Republic that she never claimed to be part of any group other than AZ Patriots. However, next to the logos for UJPA and IAPP, it states that she has been a member since February 2019 and that her membership “Expiers” in 2024.

She also told the Republic that the reference to Reporters Without Borders was “simply a quote about an organization she supports.”

Harrison did not respond to a request for comment from the Mirror.

The Mirror has also reached out to TPUSA, whose website asks multiple questions for media members seeking press passes and states there is a 72-hour wait time before passes are approved for an event. TPUSA has not responded to a request for comment.

Earlier this year, Harrison was barred from the Arizona House of Representatives after she and another member of her group followed a group of students advocating for undocumented immigrants into a private meeting with a Democratic legislator, claiming they were “observing.”

The Republic reported Oct. 25 that Harrison had been arrested for identity fraud in an unrelated matter stemming from her allegedly unauthorized use of another person’s hotel rewards points.