Three of Arizona’s four Republicans in the U.S. House of Representatives called on President Donald Trump to “revive and expand” the atrophied domestic uranium industry through government subsidies just days before his Nuclear Fuel Working Group released its recommendations.

Because “free market uranium companies in the U.S. are unable to compete” with companies backed by foreign governments, the U.S. government must step in to boost the industry, they wrote on Oct. 8

U.S. Reps. Andy Biggs, Paul Gosar and Debbie Lesko signed a letter with nine other House Republicans lamenting the nation’s reliance on foreign uranium imports, particularly those from Russia and countries in its sphere of influence. Rep. David Schweikert was the only Arizona Republican representative who did not sign the letter.

“While the United States was once a global leader in uranium production and is home to vast uranium deposits, the domestic industry is currently supplying less than one percent of the uranium needed to power the U.S. nuclear fleet,” the letter reads.

The letter focuses on uranium production for defense purposes, but it also mentions subsidizing uranium for domestic energy production.

“We also risk becoming entirely dependent on uranium imports to power 20 percent of the electricity generated in the United States,” according to the letter.

A few of these claims are misleading.

In 2006, the Organization for Economic Co-operation and Development produced a retrospective on 40 years of data collected on uranium resources, production and demand. The so-called “Red Book Retrospective” summarizes trends in global uranium using the OECD’s annual Uranium Red Books from 1965 to 2005.

The Red Book is considered by uranium researchers and democratic governments to be the definitive reference on the global uranium market. Several of the claims in the letter signed by Gosar, Biggs and Lesko are not supported by OECD’s statistics.

“The U.S. was once a global leader in uranium production”

The U.S. did for a long period produce the most uranium of any country. However, that occurred during a period in which the industry was heavily subsidized by the federal government, leading to an overaccumulation of enriched uranium. Once government subsidies halted in the early 1980s, domestic uranium production plummeted.

Katie Tubb, a senior policy analyst at The Heritage Foundation who worked for Vice President Mike Pence when he was in Congress, wrote Oct. 1 that protectionist uranium policies were what caused the market to collapse in the first place. 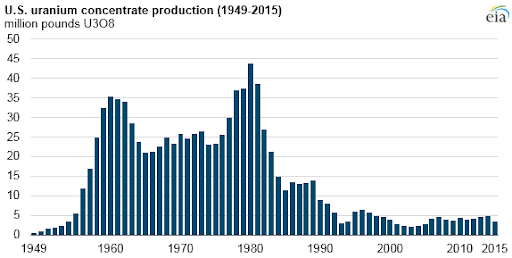 “Protectionism also pushed the limits of reciprocal trade agreements with allies, mobilizing nations like France, Great Britain, Germany, and the Netherlands to break the U.S. monopoly on enrichment. While protectionism may have appeared to help the domestic uranium mining industry, it had the long-term effect of contributing to its current woes.”

She suggested the administration secure enough domestic uranium for its defense needs, but she cautioned that wide subsidies to the industry – like those suggested by the Arizona Republicans – and refusal to continue imports from reliable producers would repeat the same mistakes of the past.

“The United States … is home to vast uranium deposits”

The United States does not possess vast uranium deposits.

Although the total accessible uranium in the U.S. is significant, there is much less here than in the countries currently leading production in the global market. Furthermore, what the U.S. does have in terms of deposits is comparably expensive to recover. 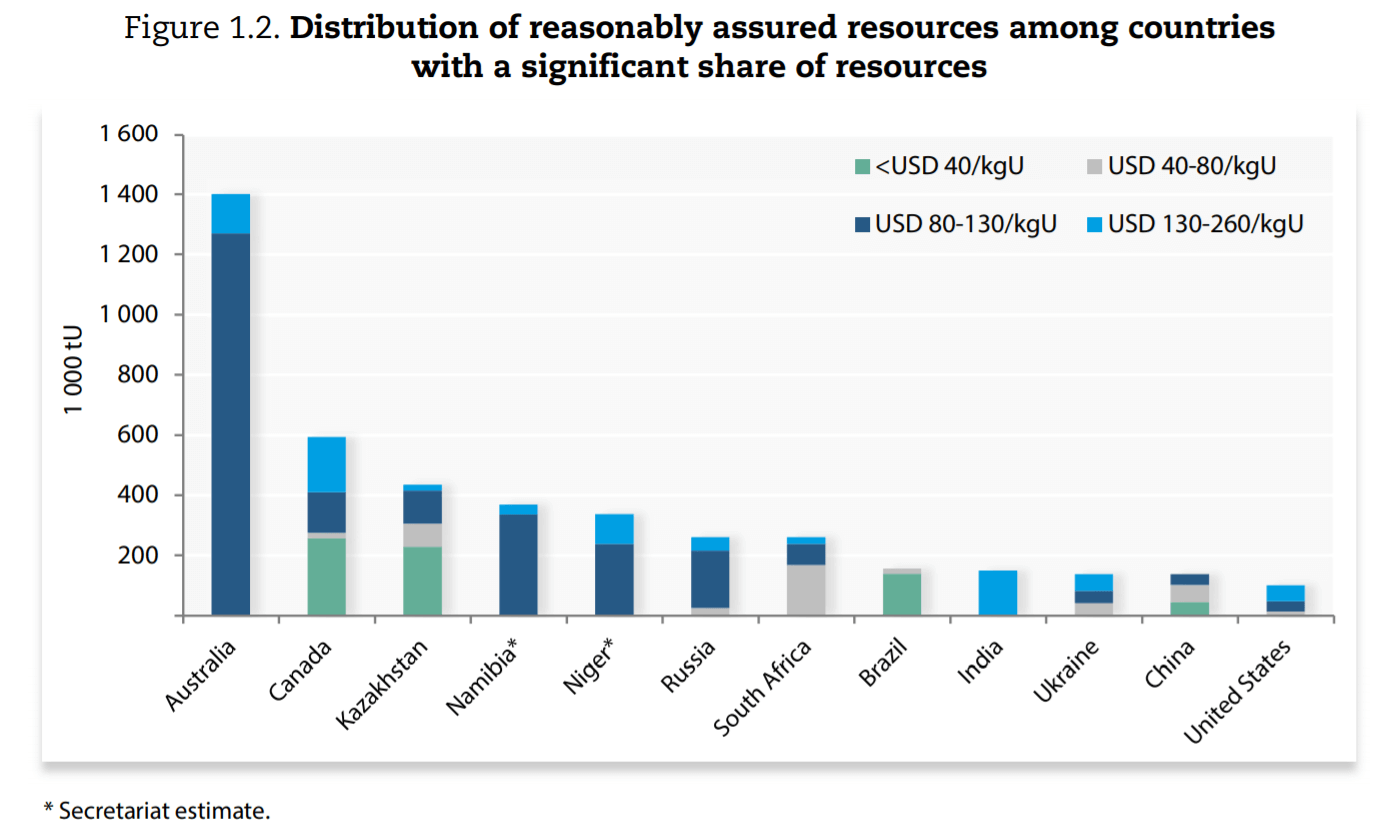 “The notion that there’s this high-quality uranium there – it’s just not (true). When you look at global uranium resources, they’re all categorized by what it takes to recover them. When you look at those easy-to-recover resources, they are in Canada, Australia and Kazakhstan. It’s just not the U.S. It never was,” Sharon Squassoni, a nuclear energy researcher at George Washington University, told Arizona Mirror last month.

The most recent OECD Red Book confirms Squassoni’s opinion. The U.S. has relatively little uranium, and most of what we do have is in the highest cost range to recover.

Utilities are already almost entirely dependent on uranium imports for their nuclear generators. The U.S. Energy Information Administration last month reported that, in 2018, only 10% of uranium used in domestic reactors was produced in the U.S. 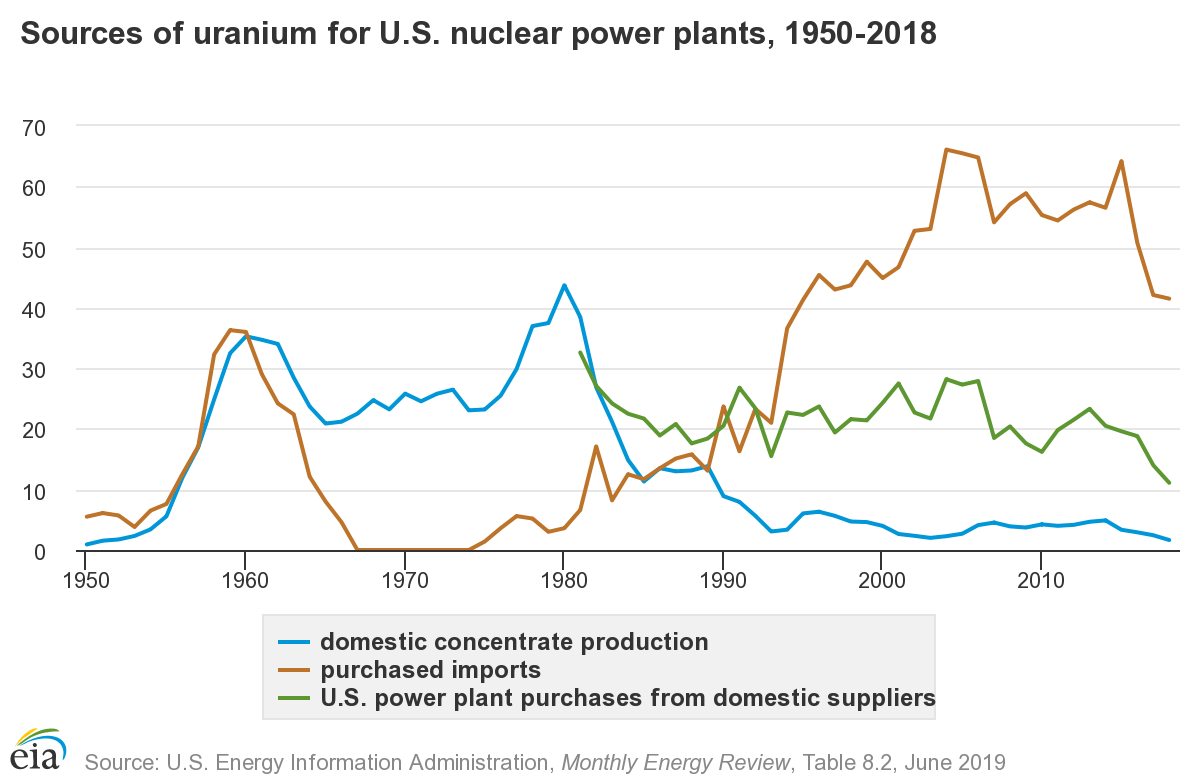