Monument Valley during a lightning storm. Photo by fhhoq.com/CC BY 4.0

The U.S. Department of Interior’s latest round of its land buyback program ended in September for all Navajo Nation applicants, and DOI’s early data show a sharp decline in participation.

As of Sept. 27, only 23% of Navajo landowners who had offers participated in the program, compared to 43% in the program’s last round in 2016. Of the $157 million the Interior Department set aside for Navajo Nation landowners, only $39 million was accepted.

By comparison, in 2016 the government set aside $259 million, of which $108 million was accepted. To date, the U.S. has bought back nearly 200,000 acres from landowners on the Navajo reservation.

A spokesperson for the DOI said that participation in subsequent rounds of the buy-back program is usually lower than the first round. The spokesperson also said the latest data only account for buy-backs through Sept. 27 and that the DOI offers some options for late applicants.

Still, the latest data indicate that participation by Navajo Nation landowners was by far the lowest of any tribe that has been offered at least $100 million in the buy-back program.

The information office for the Navajo Nation could not be reached for comment on this story.

What’s the purpose of the buy-back?

The complaint was one of the largest class-action lawsuits against the U.S. government, with more than 500,000 plaintiffs.

The plaintiffs in Cobell v. Salazar claimed that the federal government had mismanaged lands that were held in trust for the benefit of American Indians.

The core of the complaint related to the system of ownership and accounting of American Indian-held lands, a problem called “fractionation” that stems from the original parceling-up of reservation lands. 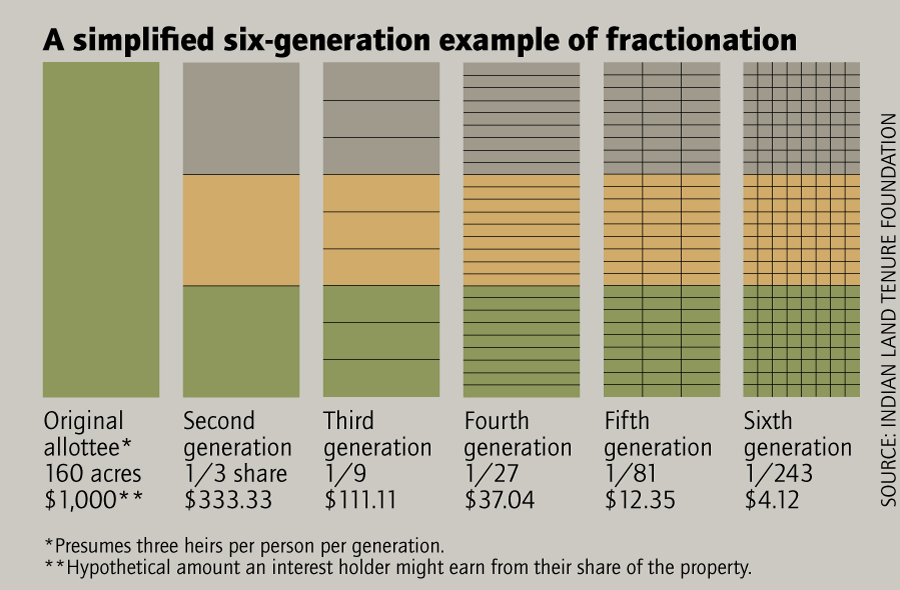 The Dawes Act of 1887 broke up land into individual holdings that were then mandated to be inherited in equal fractional ownership by each successive generation. After more than a century of this ownership system, many land holdings have hundreds or even thousands of fractional owners.

Because the Dawes Act required that 51% of fractional owners of a particular plot must agree on its use in order to develop it, most of these lands are economically useless.

In many cases, full accounting of ownership is impossible.

After 15 years of litigation, the U.S. government and American Indian representatives agreed that proper accounting of land beneficiaries is impossible due to the complexity of ownership. In 2010, the parties reached a settlement wherein $3.4 billion would be set aside for the Department of Interior to address these problems.

Roughly $1.9 billion of that settlement is the Trust Land Consolidation Fund, which is the fund used to finance the DOI’s buy-back program. DOI purchases fractionated lands from individual landowners, then returns those lands to the tribal trusts, thereby making lands community assets as they once were.

Fractionation on the Navajo Nation

When the Dawes Act was passed in 1887, there were only a few thousand Navajo. Today, more than 300,000 Navajo are enrolled as tribal members. This population growth has brought with it a proportional degree of fractional ownership of land.

There were 25,509 offers made to individual Navajo landowners in 2016. According to the DOI’s sales data, that is the most offers made for an individual tribe in any single round of the program’s implementation to date.

Yet, participation rates by Navajo Nation landowners in the latest round were lowest of any tribe that has been offered $100 million or more in the buy-back program.

“The Nez-Lizer Administration is very pleased and optimistic to see another phase of the federal Land Buy-Back Program implemented on the Navajo Nation to further consolidate fractionated lands,” Nez said in a public statement leading up to the latest implementation of the program.

Parker Shea joins the Arizona Mirror after recently graduating from Arizona State University, where he was editor-in-chief of State Press Magazine. He hopes to one day have a career reporting on issues related to the environment. He is a daily runner and enjoys exploring the Arizona wilderness.