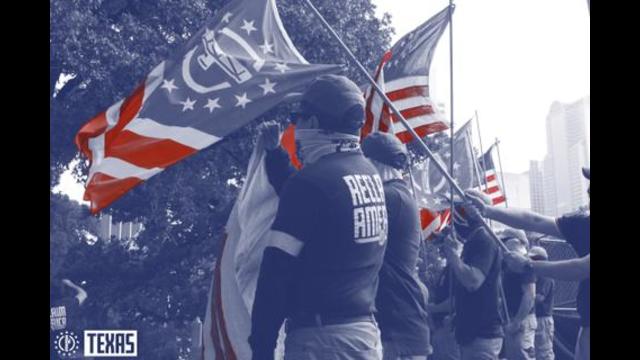 The group was formed in 2017 and has been known in part for its flyering of college campuses and stickering of communities that it is known to be in.

Patriot Front is also known for spreading anti-Semitic imagery on college campuses in the past. The imagery that was spread on Arizona campuses this time was less inflammatory.

Slogans like “America First”, “Revolution is tradition” and “Better dead than red” were on the stickers. which plastered across ASU and GCU, according to pictures posted by the group’s Twitter.

However, the stickers did include racist imagery, including the group’s logo, which includes a fasces and 13 stars. The fasces is an ancient axe used by the Romans, but the image was used by Benito Mussolini during his rise to power as a symbol of his movement. The number 13 is often used as code to stand for A and C – the first and third letters of the alphabet – which stands for the Aryan Circle. The number is also a common theme in white supremacist groups.

It appears that some 90 college campuses were targeted over the weekend by the group, which bragged on social media where its members had posted stickers.

ASU experienced no incidents of anyone clashing with anyone posting the materials on campus, according to ASU spokesman Bret Hovell.

“Sometimes ASU, like other universities, has experienced strange notes from strange people who are not a part of the ASU community being posted around campus,” ASU President Michael Crow said previously in 2017. The quote was sent to the Arizona Mirror as the University’s response. “At ASU, we see them for what they are: The rantings of unhinged hate-mongers bent on disrupting the lives of people who are moving forward into a future that these Cro-Magnons fear. We have removed the messages and have moved on about our business.”

At GCU, a spokesman said the stickers are currently being removed and said that any stickers placed on campus have to go through an approval process. There were no incidents reported on the campus of anyone involved with the group clashing with anyone while on campus.

College campuses in Arizona have been the target of white supremacist stickers and fliers before.

In 2017, hate group Identity Ervopa was placing information at several college campuses across the state.

Leaked chats by the group released last year by independent media outlet Unicorn Riot revealed that members from the group had been engaged in a campaign to continue to place fliers and other information a community colleges and campuses across the state.

The group also re-branded itself as the Foundation for American Society, which registered as an Arizona company in March.

**UPDATE: This story has been updated to include comments from Grand Canyon University.

School’s out: What’s the post-pandemic catch-up plan, especially for children of color?