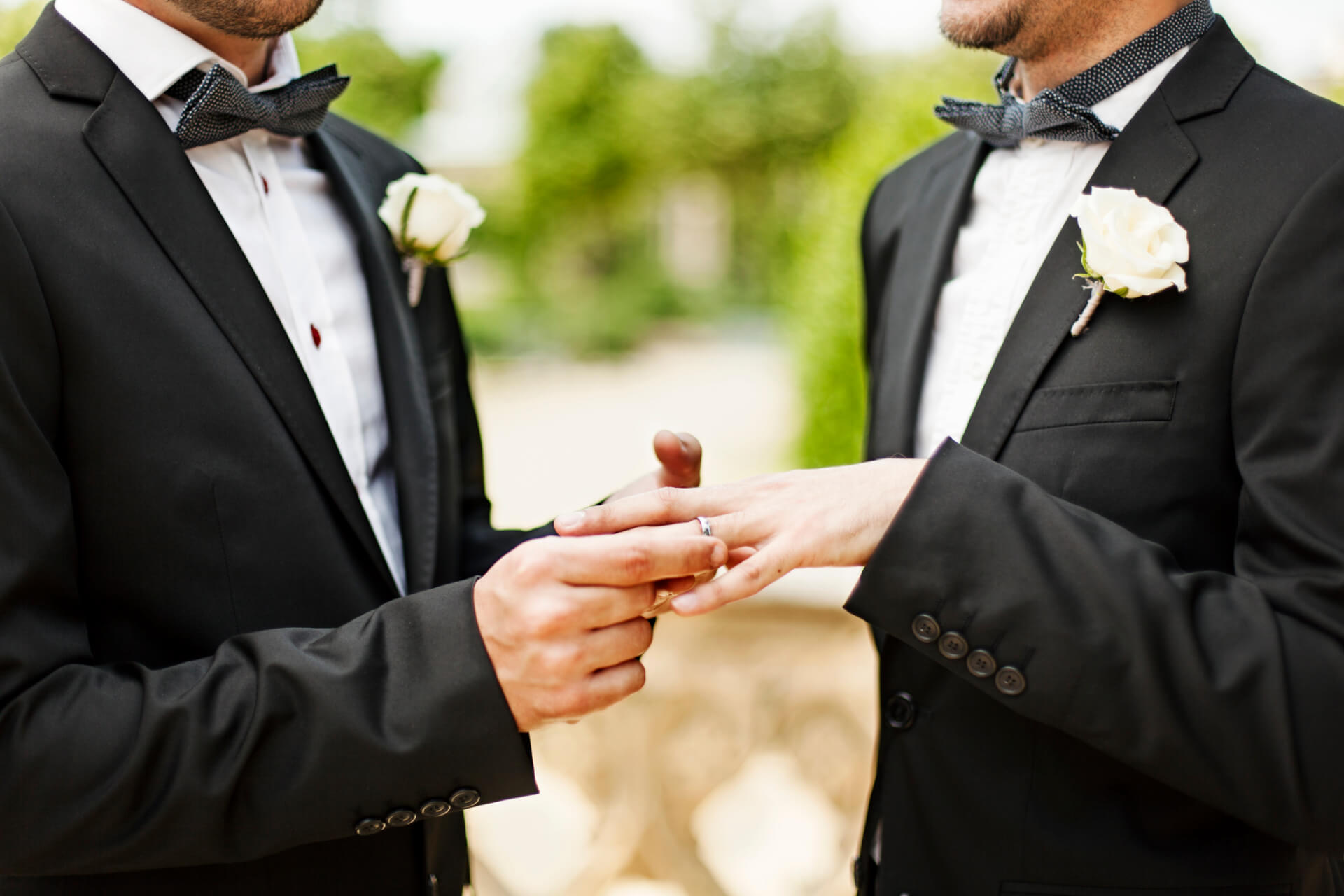 In a 4-3 opinion that reversed the rulings of the lower courts, the justices said requiring Brush and Nib Studio to make invitations for same-sex weddings would infringe on their free speech rights under the First Amendment to U.S. Constitution and their rights to religious freedom under state law.

The city has not cited Breanna Koski and Joanna Duka, the owners of the online company, for refusing any requests by prospective customers to create invitations for a same-sex wedding. Rather, they sued the city preemptively to prevent possible future enforcement and to get a declaration that it would violate their free speech rights.

Duka and Koski sought to put a statement on their website announcing that they would refuse requests to create custom artwork for same-sex weddings.

“Duka and Koski’s beliefs about same-sex marriage may seem old-fashioned, or even offensive to some. But the guarantees of free speech and freedom of religion are not only for those who are deemed sufficiently enlightened, advanced, or progressive. They are for everyone,” Justice Andrew Gould wrote in the majority opinion.

Duka and Koski were represented by the Alliance Defending Freedom, a Christian legal advocacy organization that has long been on the front lines in opposing same-sex marriage and defending religious freedom, including in disputes involving gay marriage.

Gould said free speech and religion rights would not permit Koski and Duka to refuse to sell other products to LGBT customers, and that they have stated they have no desire to do so. For example, he said Brush and Nib could not refuse to sell its various premade wedding products to same-sex couples.

But he singled out custom invitations as “pure speech” and artistic expression. Gould noted that Brush and Nib’s invitations include Koski and Duka’s hand-drawn words and original artwork, and that “they are intimately connected with the words and artwork contained in their invitations.”

“The process of creating and selling pure speech, which undeniably involves decisions about what to create and what not to create, is protected by the First Amendment,” Gould wrote.

In addition to free speech rights, the majority of the justices found that forcing Koski and Duka to make invitations for same-sex couples would violate their religious rights that are protected by Arizona’s Free Exercise of Religion Act. That act protects people’s “ability to act or refusal to act in a manner substantially motivated by a religious belief, whether or not the exercise is compulsory or central to a larger system of religious belief.”

Gould wrote that, because of Duka and Koski’s sincerely held beliefs that Christianity forbids same-sex marriage, “The coercion the Ordinance places on Plaintiffs to abandon their religious belief is unmistakable.”

While Phoenix city code defines sexual orientation as a “protected” for anti-discrimination purposes, Gould noted that state and federal law do not consider it a legally protected status when it comes to public accommodations.

Will the scope really be limited?

Gould emphasized several times in his opinion that the court’s ruling is extremely narrow and applies exclusively to the custom invitations offered by Brush and Nib, not to other goods and services offered by them or by other companies.

“Our decision today is limited to one, very unique product … and the protection afforded this product is based solely on the celebratory messages Plaintiffs convey,” Gould wrote.

That claim rang hollow to the three dissenting justices, all of whom authored separate dissents.

In the main dissent, former Chief Justice Scott Bales, the court’s only Democrat prior to his recent retirement, wrote that the ruling isn’t as narrow as Gould made it out to be, arguing that it opened the door to many other services and made-to-order goods with “expressive content.”

Christopher Staring, a Court of Appeals judge who heard the case in place of Justice Robert Brutinel, who recused himself, echoed that argument and said the majority’s opinion provided little guidance to lower court judges like himself on how to apply the ruling.

And Vice Chief Justice Ann Timmer questioned whether the ruling’s findings on religious freedom would extend into other services, such as a taxi cab owner who refuses to drive unaccompanied women based on sincerely held religious beliefs that women should travel only with a male companion.

“It is not difficult to imagine similarly discriminatory scenarios involving race, color, religion, sex, national origin, marital status, and disability, all of which the Ordinance proscribes,” Timmer wrote.

The dissenters argued that the city ordinance regulates conduct, not speech, and that any burden on Brush and Nib’s free speech rights would be “incidental.” Bales said the ordinance is “content neutral” and doesn’t require the company to provide any service or speak about anything. It simply requires them, if they decide to provide a good services to members of the public, to provide it to everyone.

“Even if the Ordinance burdens speech, it is a constitutionally permissible burden because the Ordinance is content neutral, serves a compelling governmental interest, and there is no less restrictive alternative,” Bales wrote.

Reactions to the ruling fell largely along partisan lines, with Republicans lauding the opinion as a victory for religious freedom.

The Center for Arizona Policy, a Christian social conservative advocacy group, said the ruling “rights a serious wrong inflicted on the people of this state” by Phoenix and other cities with similar ordinances, and said the court “confirmed artists do not give up their free speech and religious freedom rights when they enter the marketplace.”

“Let’s be clear, Duka and Koski serve everyone, but the government should never coerce Arizonans into using their artistic talents to celebrate a message that violates their deeply held beliefs,” CAP said in a press statement.

“This is a critical victory for the First Amendment and religious freedom, and I thank the Court for affirming that the government cannot compel business owners to communicate a viewpoint that violates their sincerely held religious beliefs,” Bowers said.

Congressman Greg Stanton (D-Ariz.), who served as Phoenix mayor when the nondiscrimination ordinance was enacted, called it a “shameful day for Arizona.”

“Today’s decision will hurt real people. And after so many have worked so hard to show that Arizona is a welcoming place for everyone, this decision will harm our economy by sending the unfortunate message that discrimination on the grounds of sexual orientation is still acceptable by some state leaders,” Stanton said.

And state Rep. Daniel Hernandez, D-Tucson, speaking on behalf of the legislature’s LGBTQ caucus, warned that the ruling will be a “Pandora’s box for future litigation.”

“It also serves as an important reminder that there are no protections for the LGBTQ community in Arizona when it comes to housing, public accommodations, and employment. We need to work to pass non-discrimination for all Arizonans in the next legislative session,” Hernandez said.

Mayor Kate Gallego, Stanton’s successor, took a more optimistic approach, emphasizing that the Supreme Court did not strike down the city’s antidiscrimination ordinance.

“This ruling applies to one single business making one specific product, it applies to no other businesses in our city. While we may not agree with this ruling the debate on this topic goes on and Phoenix remains on the right side of history,” Gallego said.

The narrowly divided ruling is likely to fuel complaints from Democrats over the 2016 expansion of the Arizona Supreme Court from five to seven justices  by Republican lawmakers and Gov. Doug Ducey.

Gould was joined in the majority by Justices Clint Bolick, John Lopez and John Pelander, who has since retired. Ducey appointed Gould and Lopez after the court expansion law created two new seats. Without the addition of those seats, Brush and Nib may well have been on the losing end of a 3-2 ruling, with Bolick and Pelander in the minority.

States struggle to draft COVID-19 vaccine plans while in the dark...