A political consulting firm owned by Arizona Republican Party Chairwoman Kelli Ward and her husband is soliciting work for legislative campaigns, raising questions among Republicans about conflicts of interest.

Atlas Alliance, which Kelli and Michael Ward formed in September 2018, has already signed an agreement to work with one legislative candidate and has solicited business from another. Both candidates say Michael Ward reached out to them about consulting for their campaigns.

State political parties are generally expected to remain neutral in intra-party fights. One hallmark of that neutrality is not taking sides in contested primary elections. Though neither Jon Saline and David Peelman, both of whom are running for the state House of Representatives in Northern Arizona, have contested primaries, there’s still plenty of time for others to join the race.

The deadline for candidates to qualify for the ballot is April 6, 2020.

Michael Ward told Arizona Mirror in a text message that Atlas Alliance doesn’t get involved in races with contested primaries, and that the firm won’t stay engaged in any race in which a primary challenger emerges.

But the Wards and the Arizona Republican Party refused to answer other questions about Atlas Alliance, including whether the involvement of a consulting firm owned by the state party chairwoman would discourage potential candidates and give people the impression that the candidates it works for are officially backed by the party.

Instead of answering questions, Kelli Ward lashed out at the Mirror on Twitter and called this story “fake news.”

The Left-Wing Arizona media (worst in the country) is at it again! Get ready for more #FakeNews from the Arizona Mirror—new slimy group, look at its funding—about a consulting firm set up long before I decided to run for Chair, of which I have ZERO involvement… (/1)

“The Left-Wing Arizona media (worst in the country) is at it again! Get ready for more #FakeNews from the Arizona Mirror—new slimy group, look at its funding—about a consulting firm set up long before I decided to run for Chair, of which I have ZERO involvement,” she tweeted on Thursday afternoon.

Ward added, “I am working diligently (for free), and in accordance with every legal and ethical standard, to support ALL our Republican candidates with the resources and support they need to reach voters and spread our #AmericaFirst message.”

I am working diligently (for free), and in accordance with every legal and ethical standard, to support ALL our Republican candidates with the resources and support they need to reach voters and spread our #AmericaFirst message. Thank you! (3/3)

Her claim that she has no involvement in Atlas Alliance is disputed by the company’s website and corporate records.

The company’s website includes a photo and biography of Ward, whom it identifies as a founding partner. Arizona Corporation Commission records list both Kelli and Michael Ward as the company’s owners. The company is registered at their Lake Havasu City home.

Kelli Ward worked as a family physician before becoming a state legislator in 2013. She served two terms in the Arizona Senate before setting her sights on the U.S. Senate.

Michael Ward is a former emergency room physician whose political experience largely consists of leadership roles he held in Kelli’s failed U.S. Senate campaigns in 2016 and 2018. Earlier this year, The Arizona Republic reported that he was accused of spitting in the eye of a former volunteer with his wife’s campaign.

The Wards’ decision to wade into legislative races has left some Republicans questioning their actions, which several called highly unusual.

Chris Baker, a longtime Republican political consultant in Arizona, said it’s inappropriate for a state party chair to be part of a campaign consulting firm while serving as chair.

“It is important for the state party chairman to not only avoid conflict-of-interest situations, but also to avoid the appearance of conflicts of interest,” Baker said. “Even if their entire operation is … as innocuous as they claim it could be, it still gives the wrong impression.

“The chairman of the party is there to unify the party. And running a consulting firm that is involving itself in elections undermines that goal.”

Even if Kelli Ward isn’t taking an active role in Atlas Alliance’s campaign work, Baker said the fact that she is a co-owner of the company and has her picture on the website creates an appearance of a conflict of interest.

Baker added that, if the Arizona Republican Party involves itself in any campaign that Atlas Alliance is consulting for, it raises questions of coordination. It is illegal in Arizona for political campaigns to coordinate with outside entities that are spending to influence their races.

About a week later, she and her husband created Atlas Alliance.

By the time Kelli Ward terminated her campaign committee in mid-April, it had paid Atlas Alliance nearly $12,000.

On Dec. 31, the campaign paid Atlas Alliance $3,112, and on March 31 it paid the firm another $8,800. Ward’s campaign finance reports listed the payments as being for data management. Baker, who frequently works on federal campaigns, said data management generally means a company is managing or serving as a broker for a donor list.

In January, the blog Arizona’s Politics noted that Ward’s campaign began receiving payments to rent out its contributor lists shortly after Atlas was founded. Ward spokesman Zachery Henry told the blog that Ward’s lists “are in high demand.” According to Ward’s FEC reports, her campaign received about $43,000 from October through February in list rental revenue.

Peelman, one of the GOP legislative candidates whose business was solicited by Michael Ward, told the Mirror that he signed an agreement with Atlas Alliance, though he didn’t describe it as a contract. He said he hasn’t paid the company – he’s a Clean Elections candidate, and doesn’t yet have any campaign funding – and hasn’t made any financial commitments, but has agreed to pay for any services rendered.

So far, Michael Ward and Atlas Alliance have provided only advice and guidance for his campaign to represent Legislative District 7 in the Arizona House of Representatives, Peelman said. He added that the company will help him qualify for public campaign funds, and said Ward is helping guide him through the process.

The other Republican candidate contacted by Michael Ward, Saline, is running for an open seat in Legislative District 6, which will likely be one of the biggest battlegrounds in next year’s legislative races. He said Atlas Alliance sent him a contract, but that he hasn’t yet signed it. He said he hasn’t decided yet whether he’ll sign the agreement for Atlas to consult for his campaign. 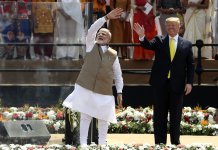