As his first hire for an Elections Integrity Unit whose mission will partly be to shoot down unfounded allegations of election fraud, Attorney General Mark Brnovich hired a lawyer whom Democrats accused of fueling such rumors herself several years ago.

Jennifer Wright this month joined the Attorney General’s Office. She serves in the office’s appeals and constitutional integrity section, with a focus on election integrity. Her work will put her under the aegis of the office’s new elections integrity unit. Republican lawmakers budgeted $530,000 for the new four-person unit.

During the 2012 election, Wright co-chaired Verify the Vote Arizona, which sought to train poll watchers, ensure election integrity and combat potential election fraud. The group, which is no longer active, was associated with True The Vote, a conservative Houston-based organization with a stated goal of fighting voter fraud, and which critics on the left accuse of engaging in voter suppression.

“In the last four years, we’ve all been made aware that there are forces at work to steal from the people by manipulating the vote… We are committed to putting a stop to vote fraud and manipulation. But we cannot do it without you,” Wright said in a video on her group’s website.

In the video, Wright urged people to help vet new voter registration forms, serve as poll watchers for ballot counting – state law grants this ability to the Republican and Democratic parties – or serve as poll workers on Election Day.

Wright herself volunteered her legal services to the Arizona Republican Party in 2012 and 2014, as a “ballot security supervisor” and managing “Election Day operations,” respectively.

Wright’s hiring comes despite the Attorney General’s Office’s stated intention to use the election integrity unit to refute erroneous accusations of election fraud.

Following the 2018 election, which saw several come-from-behind wins by Democrats in statewide races, along with controversial changes to policies on emergency voting and verifying early ballots, some Republicans spread baseless claims that Arizona’s election had been rife with fraud. Even President Donald Trump tweeted that there had been “electoral corruption” that might warrant a new election.

As Republicans kept pushing those allegations months after the election, Brnovich spokesman Ryan Anderson called them unsupported by any evidence: “Is it more likely that the ‘deep state’ stole an election in a massive coordinated effort, or that there were many process failures that have exacerbated the lack of public trust in our elections?”

Brnovich’s administration made it clear that it hoped to use the new unit to shoot down such allegations. After the funding was approved, Anderson said, “The notion that there is fraud, pervasive fraud, in our elections is damaging to the collective confidence of the public in our elections and in our public institutions.”

Secretary of State Katie Hobbs, a Democrat, questioned Wright’s hiring. Hobbs said Brnovich “has made an interesting choice, given the initial objectives outlined for this unit,” spokeswoman Murphy Hebert told the Mirror.

The Arizona Advocacy Network, a progressive advocacy group, unloaded on Brnovich and Wright on Twitter on Thursday, questioning her credentials to work on election law issues, criticizing her for the support she received from former Senate President Russell Pearce when she was a “Tea Party-backed” candidate for Phoenix mayor in 2011, accusing her of promoting unfounded election conspiracy theories and accusing her of trying to stop people from voting.

In 2012, they even recruited and trained volunteers to try to stop voters from voting. (5/12)https://t.co/UDb7bXHIGl

Anderson called the Arizona Advocacy Network’s criticism a “public shaming and partisan attack” unworthy of a dignified response. In response to Hobbs’ criticism, Anderson said, “We have some thoughts on specific hires made by other elected offices and state agencies, but we keep them to ourselves, because it’s none of our business to tell another agency or an elected (official) how to run their office.”

Anderson said the unit’s mission hasn’t changed, and disputed the notion that Wright’s hiring undermines it.

“Anyone who wants to spin up conspiracy theories about an individual’s potential involvement in the unit for personal gain or to score cheap political points is no different than those who spun up conspiracy theories about stolen elections in 2018,” he said. “We hire qualified people. If people don’t like that because it doesn’t fit their political narrative, too bad.”

Anderson said he’s unaware of anything Wright’s group said or did that would conflict with the Election Integrity Unit’s mission. He said he’s never heard or seen any corroboration for the allegations that Democrats lobbed at Verify the Vote. And he said Wright has experience in election law and monitoring that will serve the unit well.

“We hire good people. We hire quality people. She’s smart. She’s driven. She has a lot of passion for the integrity of our elections, and I don’t know that we could have found a better candidate to have somebody come on and join us early to work on some of these issues,” he said.

Democrats sounded the alarm about Verify the Vote in 2012, but their concerns don’t appear to have come to pass. In a 2016 report that pilloried Arizona for what it called a “shameful record of voter suppression,” progressive advocacy group Allied Progress wrote that voting rights groups were concerned that Verify the Vote would engage in voter suppression, but “there did not seem to be any major issues.”

The report quoted Joaquin Rios, then with the Arizona Democratic Party, as saying the concerns “never really materialized,” and that the party heard only secondhand accounts of alleged isolated incidents on Election Day.

The Secretary of State’s Office told the Mirror it had no record of any complaints regarding Verify the Vote’s activities in the 2012 election, nor did the Maricopa County Recorder’s Office.

The elections integrity unit will have a broad mandate. Anderson said its duties will include not only allegations of voter and election fraud, but issues like misuse of public funds to influence elections, campaign finance violations and voter suppression. For example, he questioned whether not sending publicity pamphlets to 400,000 voters – which then-Secretary of State Michele Reagan did during a 2016 special election – would constitute voter suppression.

Anderson also emphasized that the elections integrity unit will have other duties unrelated to elections as well, especially during election off-seasons, which the Attorney General’s Office made clear during the budget process. He said Brnovich wants to hire an auditor whose services will be made available to the office’s entire criminal division.

Announcements of additional hirings will be forthcoming, Anderson said. Though they will be budgeted as part of the elections integrity unit, Anderson said there will be a lot of overlap between the new unit and other sections of the Attorney General’s Office. He noted that attorneys from other divisions also currently work on election-related matters. 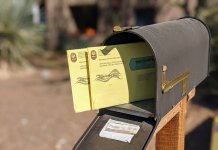