Caitlin Clifford of Scottsdale holds a sign she painted outside the U.S. Immigrations and Customs Enforcement office in central Phoenix. About 100 people gathered on Tuesday, July 2, 2019 to denounce the conditions in border and immigration detention facilities. Photo by Laura Gómez | Arizona Mirror

The demonstration was organized by the community group Arizona Jews for Justice and held in front of U.S. Immigration and Customs Enforcement’s main office in Phoenix.

Eddie Chavez Calderon, an organizer with the group, spoke at the event about why demanding better conditions is personal to him. The 23-year-old said that when he arrived from Mexico with his mother in 1999, they were detained at a Border Patrol facility.

“I came here on the back of my mother, and was in the same detention center that a lot of these families go through, and I can tell you from experience that the floors are still cold, the water is still dirty and the food is still disgusting,” Chavez said, his voice amplified by a megaphone. “Nothing has changed.”

U.S. Customs and Border Protection is the agency that typically detains migrants adults and children who arrive at the border. ICE, charged with long-term detention of migrant adults and some families, operates facilities that were recently found to have egregious violations of detention standards, including nooses found in cells, expired food, inadequate medical care, moldy bathrooms and unreported security incidents.

Rabbi Shmuly Yanklowitz said the gathering’s goal was to show solidarity for separated migrant families, adults and children who are experiencing violence in their countries, and those who have made it to the U.S.-Mexico border.

“A little bit of light dispels a lot of darkness… That is the message” Yanklowitz said. “We might stand here in front of a building that has millions of dollars… and is fake power in front of soul power.”

He then led a chant in Hebrew, Spanish and English repeating, “A little bit of light dispels a lot of darkness.”

Police tape cordoned off the gathering areas outside the ICE building, so the crowd of about 100 people were packed in a tight strip of sidewalk facing Central Avenue.

Caitlin Clifford, a Scottsdale resident and local artist, held a large cardboard sign facing the morning northbound traffic. The sign, painted with pastels, depicted the photograph of Óscar Alberto Martínez Ramírez and Valeria, the migrant father and daughter from El Salvador who drowned in the Rio Grande near Brownsville.

Clifford said she hoped her painting captures people’s attention and “highlights the atrocities that are going on at the hands of the Trump administration.”

Carol Consalvo, the state chair of public advocacy for the National Council of Jewish Women, also spoke at the demonstration. Both of her parents escaped Nazi Germany and arrived in the U.S. as refugees.

Consalvo said she worries the U.S. is heading in a similar direction as 1930s Germany, as it turned into a totalitarian state. She said the U.S. has a leader who wants to limit immigration, embraces nationalism and uses fear to stir people’s emotions.

“This treatment of immigrants, adult and children, is the beginning of the newest Holocaust,” Consalvo said. “Using torture and even death as a deterrent to seeking asylum will not stand in this country.”

Since September, six migrant minors have died in U.S. custody.

Many demonstrators said the border and immigration detention conditions amount to human rights violations. They worried about the impact of the trauma adults and children experience.

“My heart aches,” said Rep. Isela Blanc, D-Tempe. She gripped the megaphone, held back tears and shared that her family came to the U.S. searching for a better life.

“We can talk about the lack of shampoo, the lack of a toothbrush, but the reality is that we, as Americans… we are causing great harm to groups of people who have not committed a crime,” Blanc said. “They are in search of something they’ve been asked to believe in, and that’s this thing called the American dream.”

Ann Schweers is a Fountain Hills resident who, like many the Phoenix-area, has seen first-hand the conditions that migrant parents and children are in when released from federal custody.

Since December, she has worked with other women in her neighborhood to host migrant mothers, fathers and kids for a night or two.

“They tell the same stories: that there’s not enough water, no proper treatment,” Schweers said of the anecdotes about detention centers. “We’ve gotta make this stop.”

The migrants Schweers and hundreds of other Phoenix-area volunteers have helped are traveling to other parts of the country to meet family or friends. They have an immigration check-in scheduled to continue their deportation or asylum cases.

For the past nine months, churches and non-profit groups have received thousands of migrant mothers, fathers and children who recently arrived in the U.S., many of them to seek asylum. Those families have been processed by border and immigration officials, and ICE releases them to community groups.

According to ICE, between Dec. 21 and June 17 it has released 38,000 migrant family members to community groups in Arizona — mostly in the Phoenix, Tucson and Yuma areas.

On Monday afternoon, a 9-month-old girl ICE released to a non-profit group was taken to the emergency room because she was unresponsive and lethargic, said Yadira Torres, a medical assistant who examined the girl.

Torres co-directs One Hundred Angels, a non-profit group that gathers medical professionals to volunteer at centers where ICE is releasing migrant families. She said she has worked daily for about five months at sites where the coordinated releases between ICE and community groups take place.

Torres said dehydration, diarrhea and other stomach problems are the most common symptoms in adults and children. Kids often have coughs because of the cold rooms, known as hieleras (the Spanish word for icebox), where they are held.

“The stories they tell me about the hielera is that they don’t give them regular water, they have a prison toilet and a lot of them chose not to drink water at all because it’s toilet water,” she said.

Migrants have also shared with Torres that detention rooms are very cold and they have to sleep on the floor. The food includes processed meals like hamburgers and burritos, she said. Kids and adults develop diarrhea from the food, or gastritis because they don’t eat. Because the adults haven’t showered in days, maybe weeks, some also have foot fungus, Torres said.

She added she’s grateful to help and work with migrants.

“Really doing this type of work teaches me a lot of things,” Torres said. “They are really resilient. They are really strong. They give me faith that things will work out.”

Chavez, with Arizona Jews for Justice, reminded the group gathered outside of the ICE offices Tuesday that poor detention conditions are well documented, but nothing has changed.

“Unfortunately, this is not new. Our community has experienced this before but we don’t have the privilege of doing nothing,” he said.

In Arizona, a 2015 lawsuit challenging the condition at border detention sites in CBP’s Tucson sector is expected to go to trial this year. The class action lawsuit alleges that the conditions at the detention facilities are degrading and unsanitary and violate people’s constitutional rights.

On Tuesday, the Department of Homeland Security’s Office of Inspector General published another damning report showing prolonged detention of children, teens and adults at border facilities meant for short-term stay in the Rio Grande Valley.

The report noted dangerously overcrowded conditions, like adults held for a week in standing room-only cells and others in crammed cells for a month. 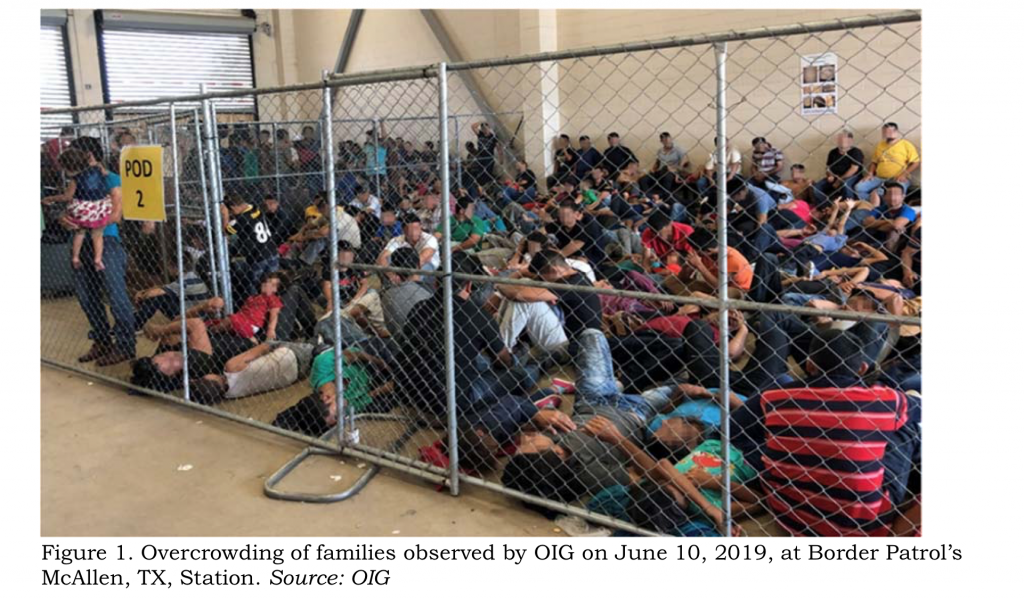 A group of families in an overcrowded caged space on June 2019 in McAllen, Texas as documented in a Department of Homeland Security’s Office of Inspector General report from July 2, 2019. Screenshot. 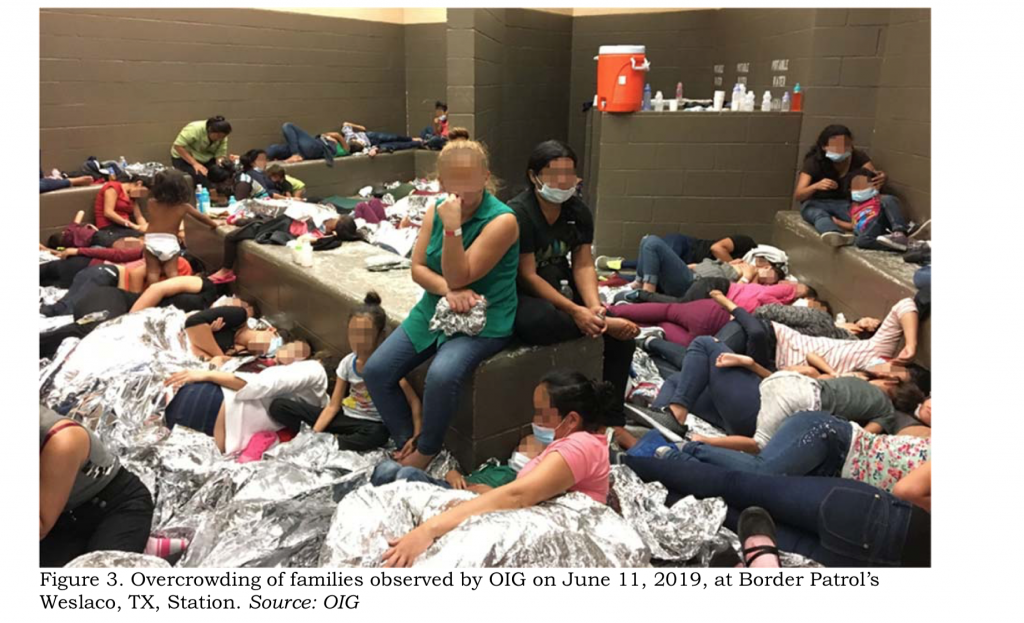 A group of migrant families in an overcrowded space known as “hielera” (or icebox) cover themselves with aluminium foil sheets on June 2019 in Weslaco, Texas facility, as documented in a Department of Homeland Security’s Office of Inspector General report from July 2, 2019. Screenshot. 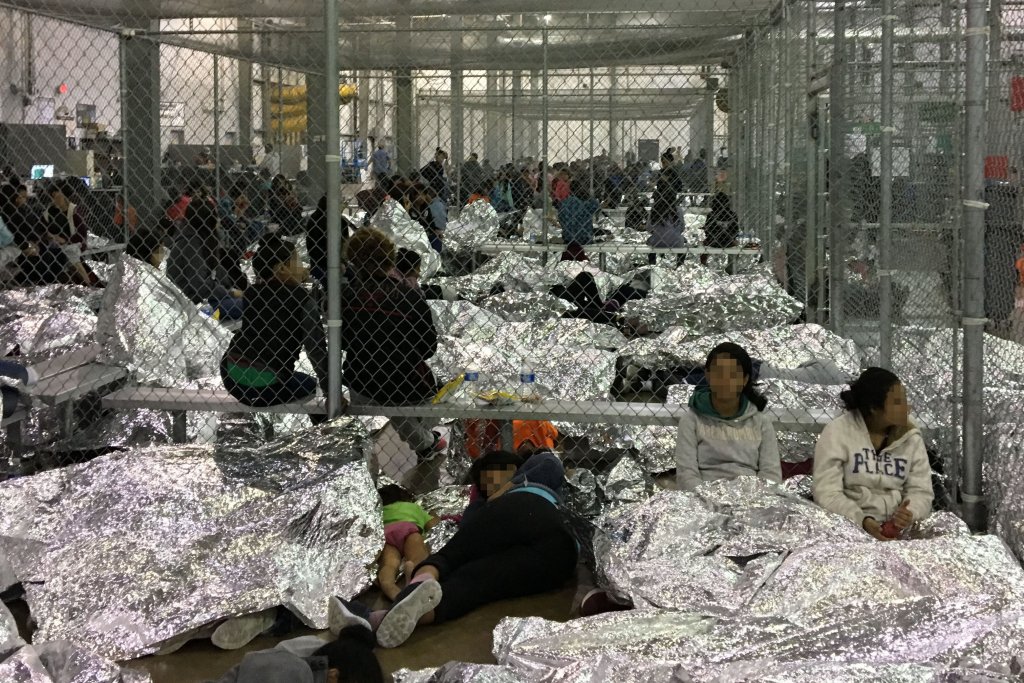 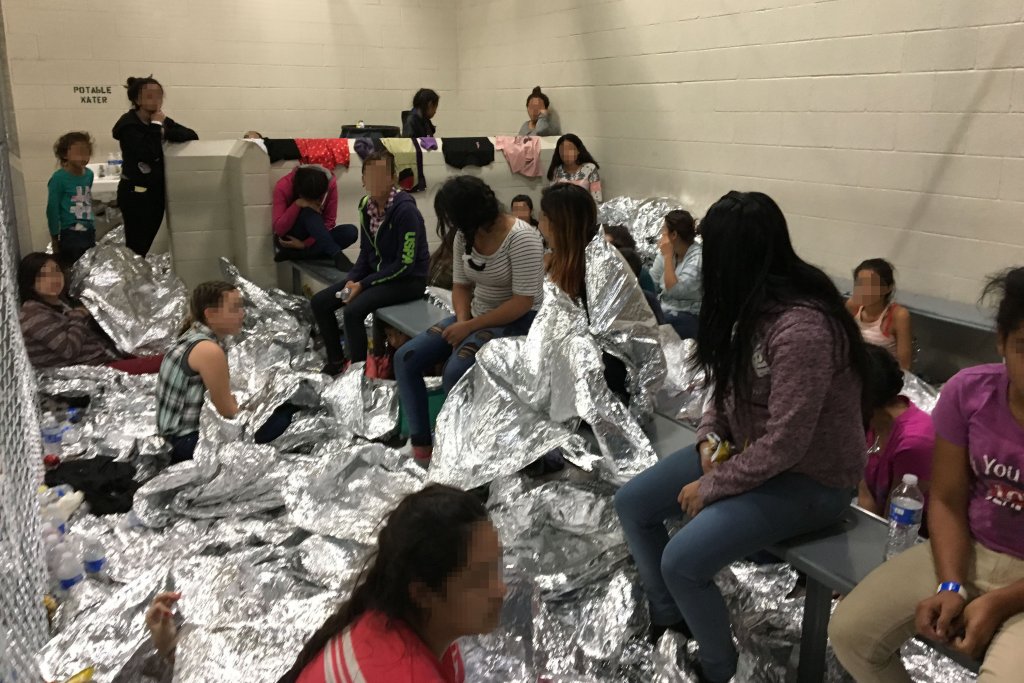 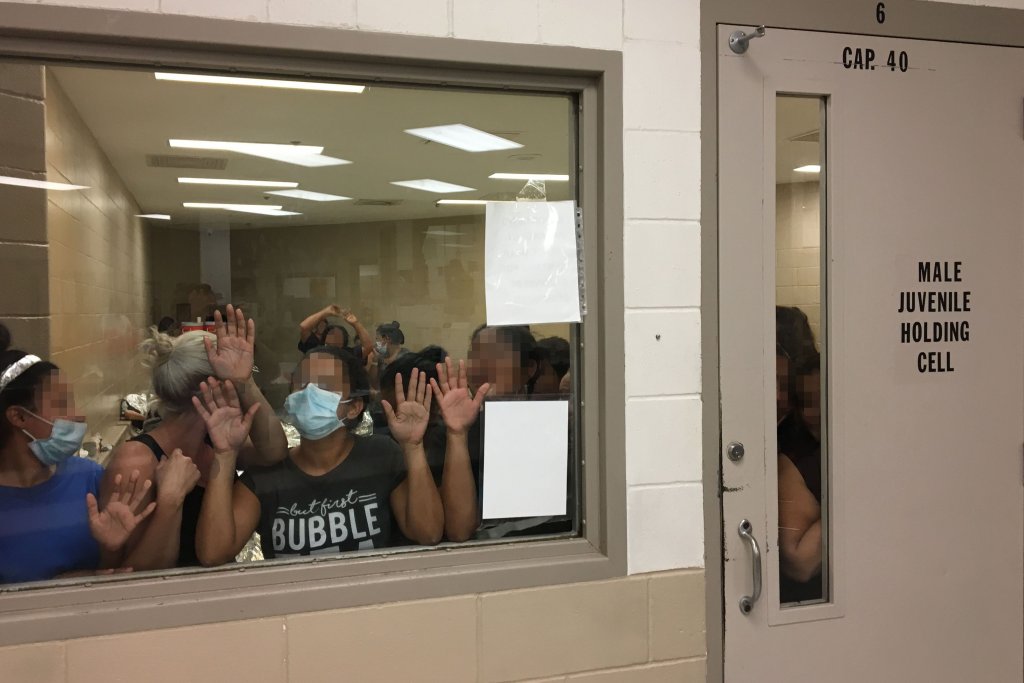 Department of Homeland Security’s Office of Inspector General observed 51 women held in a cell designated for male juveniles with a capacity for 40. The photo was taken on June 12, 2019, at Border Patrol’s Fort Brown Station. Source: OIG 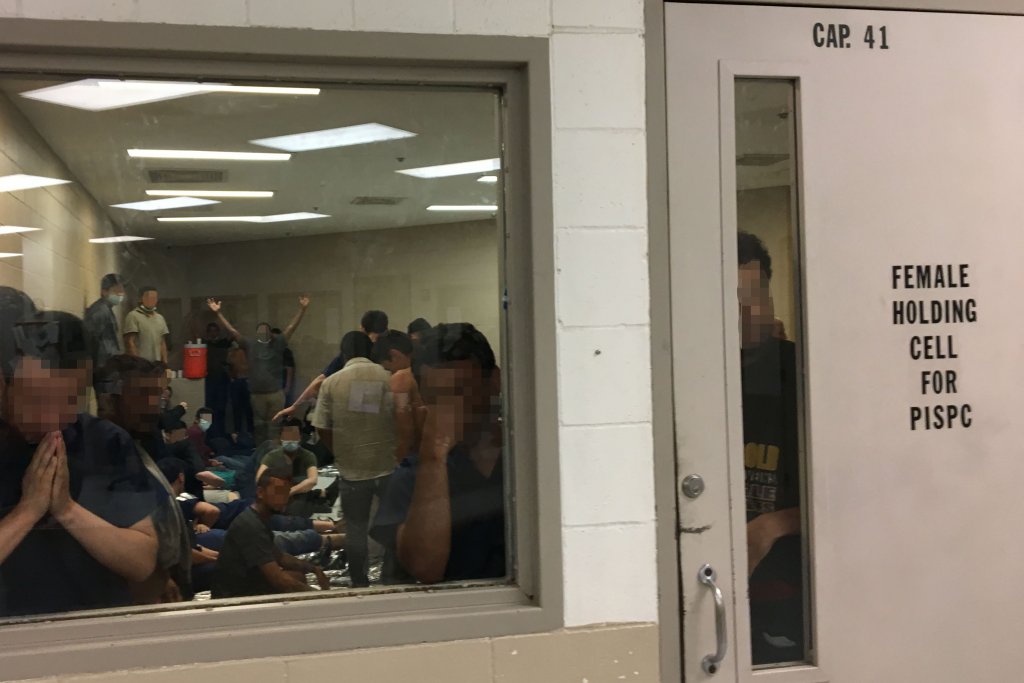 Department of Homeland Security’s Office of Inspector General observed 71 men held in a cell designated for adult women with a capacity for 41. The photo was taken on June 12, 2019, at Border Patrol’s Fort Brown Station. Source: OIG

Some migrant children younger than 7 without a parent had stayed in detention for over two weeks, and other minors didn’t have access to showers or hot meals, according to the report.

Inspectors noted a third of the children and teens had been in detention for more than the 72-hour limit. A facility manager told inspectors the overcrowding was so dangerous it was a “ticking time bomb”.

The OIG for DHS also published a report May 30 on an El Paso detention facility with dangerous overcrowding conditions, including a cell with a maximum capacity for 35 people holding 155 men.

In both reports, the inspectors noted the prolonged and overcrowded detention conditions posed an immediate risk to the safety of the detained migrants and the officers working there.

At Tuesday’s protest, Evelynne Rodas Castillo called for others to be politically engaged.