DeVos’ in-laws – Michigan conservative donors and heirs to the Amway fortune – have plowed cash into the coffers of Republican Senate candidates across the country who are up for re-election in 2020, the records show.

McSally, who was appointed by Republican Gov. Doug Ducey to take the seat of the late Sen. John McCain, is facing a special election in 2020 to determine who will serve the final two years of the term. McSally lost her 2018 Arizona Senate race to Democrat Kyrsten Sinema, and she’s expected to face a serious challenge in 2020 from Democrat Mark Kelly, a former astronaut and the husband of former Rep. Gabrielle Giffords.

As Trump’s education secretary, DeVos has been one of the administration’s most controversial cabinet officials.

She made waves during her January 2017 confirmation hearing when she cited grizzly bears as a reason that educators might need guns in schools. Since then, her policies on issues like school choice, campus sexual assault, civil rights and student debt have drawn ire from her critics.

McSally wasn’t yet serving in the Senate when DeVos was confirmed in 2017. Both of Arizona’s Republican senators at the time – John McCain and Jeff Flake – voted to confirm DeVos as education secretary.

McSally’s office did not respond to a request for comment on this story.

At a February 2017 town hall in Sahuarita, Ariz., McSally was asked by a young boy about DeVos, CNN reported. He asked her why McSally thought DeVos was qualified to be education secretary. McSally asked him back, “Why do you think she’s unqualified?”

The boy responded, “Because she wants guns at school for protection (from) grizzlies.”

The Green Valley News reported that at the town hall, McSally declined to weigh in on DeVos’ qualifications. “We will see what comes out of her department; she’s been appointed,” she said.

These aren’t the first contributions the DeVos family has made to McSally. Last October, the Phoenix New Times reported that DeVos’ family members had donated $54,000 to the Arizona Republican’s Senate campaign, more than any other Senate candidate the family supported in the 2018 election cycle.

The Education Department did not respond to a request for comment for this story. Attempts to contact the members of the DeVos family who donated to McSally’s campaign were unsuccessful.

McSally’s campaign reported raising a bit more than $2 million in the first quarter of this year, ending the period with about $2.1 million in the bank.

“The McSally Campaign has received widespread support from across Arizona showing the excitement to keep Martha as their Senator in 2020,” her campaign spokesman Anthony Barry said in a statement on her website. “Senator McSally has hit the ground running in the Senate and is already delivering results.”

Kelly, meanwhile, raised more than $4 million in the first three months of this year, the records show. He officially announced his campaign on Feb. 12. He ended the quarter with $3.2 million cash on hand, giving him a larger war chest than McSally.

The Arizona Republican wasn’t the only incumbent GOP senator to receive donations from the wealthy DeVos family so far this year.

Her in-laws also donated to Republican Sens. Cory Gardner of Colorado, Thom Tillis of North Carolina and Senate Majority Leader Mitch McConnell of Kentucky, all of whom were serving in the Senate in 2017 and voted to confirm DeVos. Those same DeVos family members did not contribute to Sen. Susan Collins, a Maine Republican facing re-election in 2020 who was one of two Senate Republicans who voted against DeVos’ 2017 confirmation. 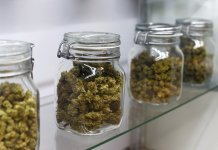