WASHINGTON – The U.S. House of Representatives on Thursday overwhelmingly passed a resolution stating that Special Counsel Robert Mueller’s forthcoming report on Russian interference in the 2016 U.S. presidential election should be made public.

Gosar was joined in voting “present” by Reps. Justin Amash of Michigan, Matt Gaetz of Florida and Thomas Massie of Kentucky.

Gosar told the Mirror afterward that he couldn’t support the resolution because it could result in sensitive or classified information being made public in a manner that skirts existing rules for evaluating such material.

“You know, we ought to be following the rules. And the rules have been stated for clarity to make sure that anything that comes out in the public sphere of this nature should be actually looked at for security aspects as well as sensitive information,” he said. “And we see Democrats constantly trying to to make a fuss about trying to get this and we ought to be following the rules.”

Gaetz said in a statement that his vote was intended as a rebuke to House Speaker Nancy Pelosi (D-Calif.).

“I’ve said to millions of Americans on television that I support releasing the Mueller report. I didn’t need to embrace Nancy Pelosi’s foreword to it today,” the Florida Republican said. “I take specific exception to the elements of the resolution noting praise for Mueller, without also noting the criticism of his very biased staffing decisions. It’s like he was fishing for talent in the Hillary Clinton fan club aquarium.”

Amash declined to comment when asked about his vote. “I’ll write some stuff on it,” he said as he hurried between House office buildings.

Top Democrats called the adoption of the resolution an important step toward promoting transparency.

Pelosi’s office issued a statement Thursday morning saying, “The American people deserve to know the truth: full transparency is essential in ensuring that the American people have full confidence in the integrity of our democracy.”

Most House Republicans sided with Democrats in endorsing the resolution.

Arizona Rep. Andy Biggs was among the 190 Republicans who voted in favor of the measure, expressing confidence that the results will clear President Donald Trump.

“Today’s resolution, though meant as an underhanded attempt at undermining President Trump, it aligns with the objectives of the Republicans in Congress,” Biggs said in a statement. “Let the American people see the report. Let them judge the information for themselves. The President has nothing to hide, and I am confident that my constituents will see that for themselves.”

Schweikert’s office said he had planned to vote in favor of releasing the Mueller report, but was unable to because he was questioning Secretary of the Treasury Steven Mnuchin in a committee hearing.

“He ran to vote, but unfortunately got to the floor right after the vote closed,” said Grace White, Schweikert’s press secretary. She said Schweikert submitted a written vote to the Congressional record declaring his support for the resolution. 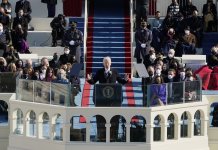 US House unanimously calls for Mueller report to be public

Biden immigration overhaul would open a door to citizenship for 11...