Jennifer Harrison, in a screenshot of Facebook Live video showing an incident that got her banned from the Arizona House of Representatives.

Two members of a right-wing extremist group have been barred from entering the Arizona House of Representatives.

House Speaker Rusty Bowers, R-Mesa, barred two of the members after they had followed a group of students advocating for undocumented immigrants into a private meeting last month with a Democratic legislator, claiming they were “observing.”

“It’s unfortunate that this action was necessary, but Speaker Bowers takes the safety and security of all House members, staff, constituents, and guests seriously,” Matt Specht, a spokesman for the speaker, told the Arizona Mirror.

Jeremy Bronaugh and Jennifer Harrison formerly were members of Patriot Movement AZ, often referred to as PMAZ, a group that has been deemed a hate group by the Southern Poverty Law Center, which tracks extremism across the country.

However, a week ago, Harrison and Bronaugh broke off to form a new group dubbed AZ Patriots.

The pair was still affiliated with PMAZ when the incident that led to them being barred took place.

On Jan. 23, Harrison and Bronaugh posted a Facebook Live video on PMAZ’s Facebook page showing them following a group of students associated with Aliento into the office of Rep. Kelli Butler, D-Paradise Valley. Aliento is an advocacy group for undocumented immigrant youth, often referred to as “dreamers.”

The duo waited near a set of doors that can only be opened by security officers or with a keycard. When the group of students was allowed in, Harrison and Bronaugh followed them, telling security that they were part of the student group.

Now a sign with the words “No waiting beyond this point” sits near the doors. 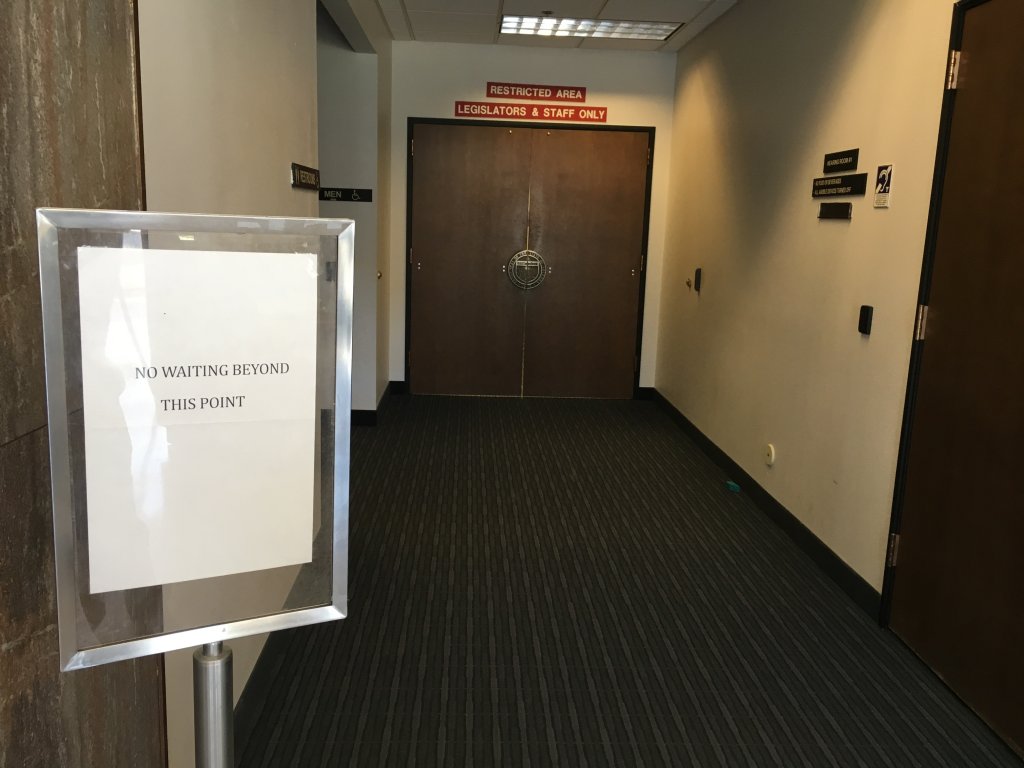 “I’m not sure what y’all are-” Butler said to the pair before Harrison interjects that they are “observing” and that they’re in the “people’s house.”

“My assistant was really rattled by it,” Butler told the Mirror. Butler’s assistant alerted security, but Butler said she did not contact Bowers.

“I just kinda got nervous, as I didn’t know what their intention was,” Butler said. She said she didn’t recognize them at first, but it didn’t take long for her to realize who they were. Still, Butler let Harrison and Bronaugh remain in her office for the roughly 20-minute meeting.

On the video, Harrison bragged about sneaking into the meeting.

“We were like the big elephant in the room,” she said after leaving the meeting, referring to the shirts they were wearing. Bronaugh’s shirt read “build the wall,” Harrison was wearing a shirt declaring that “dreams are for Americans.”

“Alright, let’s see what other trouble we can get into,” Harrison said before ending the video because her phone’s battery was dying.

Specht confirmed to the Mirror that the Jan. 23 incident prompted Bowers to bar Harrison and Bronaugh from the building.

The speaker barred them under a House rule that says the speaker “shall have the general control of the House Chambers and the corridors, passages and committee, hearing and staff rooms.”

That same day, Harrison also posted a video showing her following Sen. Kate Brophy-McGee, R-Phoenix, while she was meeting with Aliento members outside of the Arizona Senate building.

A Senate spokesman said Harrison and Bronaugh have not been barred from that building.

**UPDATE** After this story was published, PMAZ deleted the video from its Facebook page and released a statement condemning the actions of Harrison and Bronaugh.

“We do not condone the action they chose to take in disrupting a pre-planned, closed door meeting with a legislator,” the group wrote on Facebook. “No members of PMAZ were notified of this incident or the plan to do this prior to the decision made by two people. They are solely responsible for their own actions.”

The Arizona Mirror saved a copy of the video before it was deleted.

Additionally, the new group formed by Harrison has issued its own statement, asking for their followers to pressure Bowers into lifting the ban.