Penalties for people who ignore requests to check their firearms into storage at public buildings in Arizona would be dramatically scaled back under a bill approved on Thursday by the Senate Judiciary Committee.

It’s illegal to carry a deadly weapon into a public building or event if the operator or sponsor asks that the weapon be checked into secure, temporary storage. Anyone who ignores such a request can be charged with a Class 1 misdemeanor, which carries penalties of up to six months in jail and fines of up to $2,500.

Senate Bill 1292 would amend Arizona’s laws on misconduct involving weapons so that anyone who enters a public venue after ignoring a request to check his or her weapon would face only a petty offense, which faces a maximum penalty of fines up to $300.

According to an FAQ about Arizona firearms laws posted online by the Phoenix Police Department, someone who enters or remains in a public building after ignoring a request to put a firearm into storage could still be charged with criminal trespassing, which can be a Class 2 or 3 misdemeanor.

The bill would also reduce penalties for people who fail to tell police officers that they’re carrying concealed deadly weapons in vehicles, people who carry concealed weapons in vehicles when they’re less than 21 years old, and people who enter polling places on election days while carrying concealed weapons. Those offenses would go from Class 1 to Class 3 misdemeanors, which are punishable by up to 30 days in jail and a fine of up to $500.

“I’m trying to take the issue where people are sometimes you forget you have what you have on and walk into certain areas in public buildings,” the bill’s sponsor, Sen. David Gowan, R-Sierra Vista, told the committee.

Anne Thompson, of the gun control organization Moms Demand Action, questioned what kind of message the state would be sending to give people nothing more than a “slap on the wrist” for carrying weapons in places where they’re not allowed to do so, like government buildings.

“The net impact of this bill is simply to make it easier for people to bring guns where they don’t belong. What is the purpose of that?” she said.

After the hearing, Charles Heller, a spokesman for the pro-gun-rights Arizona Citizens Defense League, told the Mirror that bringing a firearm into a building where it’s prohibited is harmless, and that the punishment should fit the crime.

“If you do something that causes no harm to anybody, why should there by any penalty at all?” he said. “Any intelligent person realizes that, unless the weapon is used illegally, it’s harmless.”

Heller questioned why people should even have to check their weapons rather than be allowed to bring them into public buildings, and said it’s “perfect” that SB1292 would leave that law on the books but make it much less enforceable.

“No rational person believes that it’s a harm that they’re in there where they’re not supposed to be with their gun,” he said.

Committee members spent little time discussing the proposed petty offense for refusing requests to put weapons in storage. Most of the debate over the bill in the Judiciary Committee centered on whether people have to tell police officers if they’re carrying concealed weapons in vehicles, and whether police can compel people to answer questions about it.

Sen. Eddie Farsnworth, R-Gilbert, who chairs the committee, said people may not have to answer questions from police, but that the bill needs to be amended to ensure that it doesn’t give people authority to lie to the police. 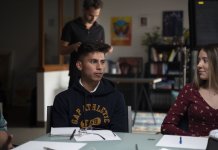 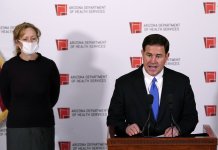