There’s a wall in our politics right now, both symbolic and literal, and it threatens to divide America in ways we haven’t seen in more than a century.

MAGA architect Steve Bannon summarized this sentiment in a recent interview with VICE News, saying, “2019 is going to be the nastiest year in American politics since, I think, since before the Civil War.”

We have every reason to fear he’s correct.

Bannon knows how to stir up angst and exploit divisions among Americans, and now he’s taking the wedge issue he made central to Trump’s campaign – the border wall – on a road show.

As Jerod MacDonald-Evoy reported, Bannon and several other Trump acolytes recently descended on a retirement community in southern Arizona to build support and take donations for a privately-funded border wall.

The project, We Build The Wall Inc., sounds more like a scam to defraud retirees than a serious effort to erect a barrier.

The group claims it can build a wall faster and cheaper than Congress, promising to construct 30 miles for $100 million even though the government estimates the cost at $24 million per mile, which is more than what they’ve collected in donations.

I doubt Bannon believes he can realistically construct a privately-funded border wall that stretches more than a couple miles. But this isn’t about reality. This is about continuing the war Bannon and Trump started years ago. A war against facts and rational thought. A war meant to separate and divide political affiliations among the races.

Trump loyalists and many Republicans will balk at this claim, saying the wall is about law and order, not race. But the wall does little to address the real issues at the border. It will not end illegal crossings, which have already plummeted. Nor will it stem the flow of illegal drugs, which enter mainly at U.S. points of entry, not the middle of the desert. It won’t affect the millions of undocumented immigrants who overstay their visas. It doesn’t offer policy solutions for DREAMers or their families. And it does absolutely nothing to address the humanitarian crisis in Central America or the most pressing threat identified by U.S. intelligence: North Korea.

Clinging to a wall keeps us clinging to fear. We can never be safe until we completely close our country off to the “invaders” gunning for our families. This is the propaganda coming from the White House and why it won’t matter if Congress agrees to a compromise on border security. Trump needs a boogeyman to maintain his grip on half of the country. And the wall – which will never stretch from sea to shining sea – is the perfect symbol to keep the fear alive.

Republican politicians may not be comfortable with this tactic, but they understand it. The real question is, how many of them, like Bannon, are itching for a fight unlike any we’ve seen since before the Civil War?

This is the question we need to ask the political straddlers, those who’ve managed to distance themselves from Trump’s overtly racist tropes while still supporting his policies.

These individuals have the power to upend the race-baiting and create a dialogue around immigration that addresses solutions instead of propaganda. But do they have the stomach to lead?

Here in Arizona, that’s a great question for our No. 1 straddler, Gov. Ducey.

Ducey is the head of a border state that has long been in the bullseye of the immigration debate. He has a platform, powerful allies, and no campaign to run. He could choose to push back on Trump’s rhetoric and against the ridiculous notion that a border wall will solve our ills.

The Democratic governors of New Mexico and California are doing this. They’re taking a stand against the faux border emergency and removing their National Guard troops.

Imagine the statement it would make if Ducey did the same. Imagine if he stood with the residents of Nogales, demanding the federal government remove the rows of razor wire threatening residents’ physical and economic livelihoods, instead of standing on the sidelines. Imagine if he denounced the efforts of the Bannon group and told Arizonans they should keep their hard-earned money in their pockets instead of wasting it on a propaganda scheme.

Trump loyalists are getting louder and angrier, and Republicans won’t be able to straddle the wall much longer. This may be the year politicians such as Gov. Ducey will need to decide…will they build a wall of fear and lies, or will they work to tear it down? 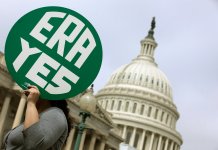