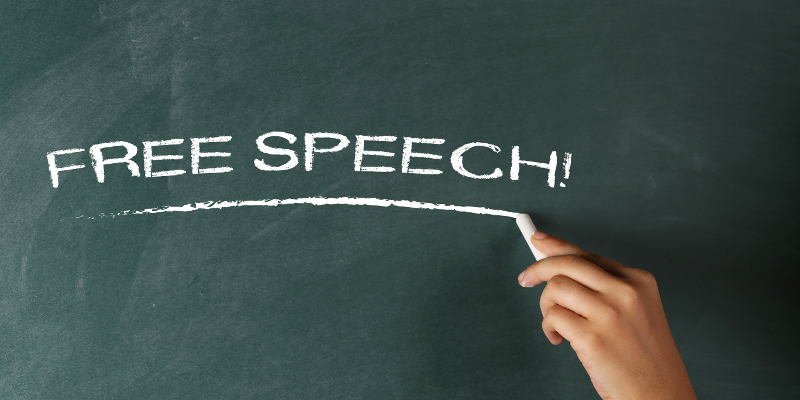 Bills seeking to ban all political speech by teachers could run afoul of the First Amendment, critics say.

House Bill 2002, introduced by Oro Valley Republican Rep. Mark Finchem, directs the state Board of Education to create a code of conduct that includes provisions like prohibiting teachers from discussing politics, religion or race. Teachers who violate that code of conduct could be fired.

Another measure introduced by Mesa Republican Rep. Kelly Townsend, House Bill 2015, would prohibit teachers from talking about their political or religious beliefs, and allow parents to sue teachers who don’t follow the law. Those teachers could also be fired from their jobs.

“It appears that there are a number of provisions… that have the potential to chill teachers’ speech,” Arizona American Civil Liberties Union spokesman Steve Kilar said. “It also seems like this might have the effect of chilling certain teaching styles, like the Socratic method, the system of posing a question to students in order to foster critical thinking.”

State law already makes it illegal for public schools and their employees to use school resources to influence an election.

Earlier this month, two teachers in the Phoenix Union School District were fined for advocating for the #InvestinEd ballot measure while on school time, according to the Arizona Republic.

The teachers were fined under the existing law that bars teachers from using school resources to influence an election.

“Even if it’s enacted with the best of intentions, it will almost certainly be applied in a politically motivated manner at some point,” Gregg Leslie, Executive Director of the First Amendment Clinic at the Sandra Day O’Connor College of Law said.

The bills come on the heels of the #RedforEd movement in which teachers across the state went on strike to demand better pay, among other legislative issues. Finchem and Townsend were both vocal critics of the movement and its supporters.

“There seems to be a lot of mistrust of what we are doing in the classroom,” Megan McCluskey, a fourth grade teacher at Griffith Elementary School in Phoenix, told the Mirror. She said that she has not seen evidence that teachers push political agendas on their students.

McCluskey also worries that the bills will make teaching in Arizona less desirable, which would mean less people coming to Arizona to teach.

First Amendment attorney Dan Barr said Finchem’s bill appears to be a solution in search of a problem.

“What’s the need for this?” Barr said.

Finchem was not available to comment for this story.

First Amendment rights in schools for teachers and students have been debated across the country for decades.

The First Amendment guarantees teachers some protections such as: attending an anti-war rally on the weekend, certain posts on social media and letters to the editor.

But the protections do not extend to certain things said in the classroom and even some outside of the classroom.

For example, if a teacher posts a joke on social media mocking a student or students, that is not a form of protected speech, as it is not a matter of public concern, according to the ACLU.

Despite that, people like Leslie say that trying to legislate issues involving speech is difficult, as “it’s almost impossible to excise just some particular bad conduct while leaving room for protected speech.”

Specifically in Finchem’s bill, HB 2002, there is a particular area that could prove troublesome.

The bill states that discussions should avoid discussing or giving opinions on any bill, legal case or executive action.

“It’s easy to see that a bill like this could be used to silence almost any discussion of public importance, because it might have a link to some bill, legal case, or executive action,” Leslie said.

McCluskey said she doesn’t see it affecting her teaching too much since, like many of her colleagues, she often lets the students lead discussions and debates on current events.

More often than not, she said when something political is discussed in her classroom, it’s something that a student has brought up.

Barr said the bill is “over-broad and vague,” and would cause more problems than it would solve.

Another part of the bill is giving people like McCluskey more pause than the possible First Amendment ramifications.

Political speech, such as advocating for a ballot measure or candidate, is not the only target of HB 2002.

The bill requires that teachers give both sides of “controversial” issues which may sound innocent enough, Leslie said, but could result in complications in the classroom.

“Does a teacher have to advance a white supremacist’s arguments in the name of ‘fairness?’” Leslie asked, adding that “enacting broad policies like this because of some anecdotal evidence of a few teachers who may have said controversial things is almost always a bad idea.”

Barr said the vague wording in the bill leaves too much room for interpretation.

“All you have to do is look on Twitter or social media to see the wide divergence of views,” he said, adding that it could unnecessarily complicate the discussion of many issues.

The bill also seems to be harkening back to similar legislation that was challenged in the courts that barred Mexican-American studies.

“I am also, frankly, confused by the provision that says one racial group cannot be singled out as responsible for the suffering or inequities experienced by another racial group,” Kilar of the ACLU said. “Does that mean discussions of slavery is off limits?”

Barr thinks that section of the bill is trying to send a particular message to teachers: “Teach the curriculum, period.”

Barr said the bill would discourage teachers from trying to bring current events into the classroom as a way of understanding a topic, for fear of losing their jobs.

If the bill does pass, any questions on the constitutionality of it would have to wait to see what policy guidelines are created by the Arizona State Board of Education, which the bill directs to create the code of ethics.

“It is certainly easy to imagine that a teacher’s protected speech could be penalized under a rule developed under this law,” Leslie said.

McCluskey said she doesn’t see a need for an ethics code that would exist only to punish teachers.

“Teachers are rule-following people,” she said, “They already adhere to a very strict internal set of ethics, so I don’t understand the need for this.”