As Election Day nears, Democrats are gaining ground in early ballot returns, buoying the party’s hopes that the “blue wave” will come to Arizona on Tuesday and the minority party will win close elections in a red state.

Although a GOP early ballot turnout advantage of 7.9 percentage points may seem at first blush to be a sizeable advantage for Republicans, it’s Democrats who have been cheering as early ballots poured in over the past week.

On Oct. 17, when the first 121,000 early ballots came in, Republicans had a substantial lead of 14.3 percentage points. One week later, that lead had shrunk to 11.7 points, and several days later was down to just 11 points.

Over the past week, that lead dropped from 10.6 points on Monday to 8.6 on Thursday.

According to data collected by the Arizona Secretary of State’s Office, the historical average for the last three midterm elections is a Republican turnout advantage of 11.7 percentage points.

In 2016, when Hillary Clinton performed relatively well for a Democratic presidential nominee in Arizona, the Republican advantage was just 6.7 points. And in 2008, the last Democratic wave year, Republicans won the turnout battle by 8.3 points.

By comparison, during the last midterm election, when Gov. Doug Ducey easily won his first term and Republicans swept the rest of Arizona’s statewide offices, the GOP’s advantage was 11.5 points.

During the tea-party-fueled midterms in 2010, Republicans led Democrats by 12 points.

The turnout numbers may be good news for U.S. Senate candidate Kyrsten Sinema, secretary of state candidate Katie Hobbs and other Democrats seeking statewide office. Most recent polls have shown a tight race between Sinema and fellow congresswoman Martha McSally. On Wednesday, a Fox News poll conducted by the firms Anderson Robbins Research and Shaw & Company Research showed McSally and Sinema tied at 46 percent apiece, while an NBC/Marist poll had Sinema leading 47-44.

A recent poll by the Arizona political consulting firm HighGround showed Sinema and Hobbs both ahead by about 1 percentage point, well within the margin the error. The HighGround poll also showed Democrat Kathy Hoffman with a narrow lead of about 1.5 percentage points over Republican Frank Riggs in the race for superintendent of public instruction.

Garrett Archer, a senior analyst at the Secretary of State’s Office, estimated that about two-thirds of all ballots are now in. He said he expects early ballots to account for roughly three-quarters of all votes cast in the 2018 election.

Other factors aside from the partisan split in ballot returns may also be working in the Democrats’ favor.

About 10 percent of the early ballots that have come in so far are from people who had never voted in a general election. And of the 116,000 ballots that were processed on Thursday, Republicans outnumbered Democrats by just 200 votes, which Archer said was the narrowest single-day gap between the two parties that he’d ever seen in a statewide election.

Paul Bentz, the pollster for HighGround, said the conventional wisdom had been that the absolute closest the partisan split would get was 7 percentage points. But the gap may get smaller than that, he said.

Bentz predicted that the final margin at the end of the election night will be somewhere between 6 and 7 points.

“I think we’ll see Democrats take a couple of statewide offices for the first time in a dozen years,” he said. 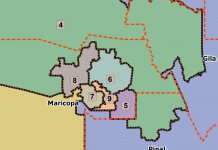