As it stands now, 12 high-profile liberal figures — including two presidents, a vice president, a U.S. senaror, a Congresswoman, a wealthy philanthropist and an Oscar-winning actor — and a cable news network have been the intended recipients of pipe bombs, sent both through the U.S. Postal Service and, apparently, hand-delivered by couriers.

Most Americans, I’m sure, are hoping both that whoever is sending these explosive devices is caught and brought to justice and that no one is hurt as law enforcement scrambles to protect other famous liberals and identify the terrorist behind this heinous act.

The same can’t be said for a couple of Arizona Republican lawmakers, one of whom is the No. 3 ranking official in the Arizona House of Representatives, who seem convinced they know who is behind the attempt to assassinate the liberals: the liberals!

Nevermind that there isn’t a shred of evidence about the motive of the person (or people) who sent the bombs. 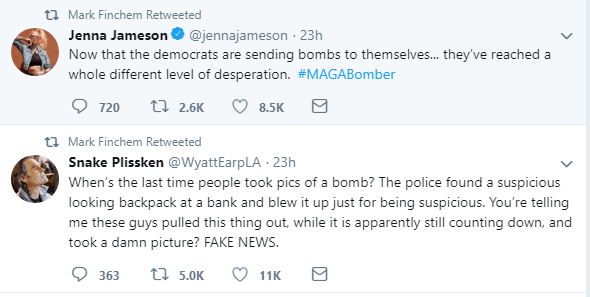 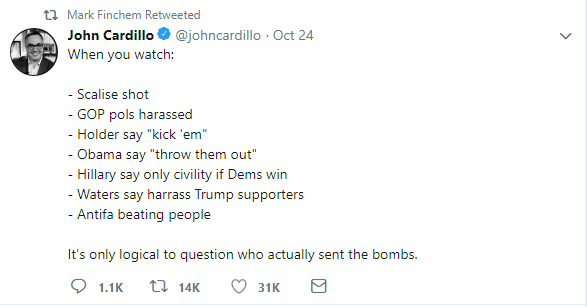 One of Finchem’s retweets was of right-wing radio host John Cardillo, who tweeted that it is “only logical to question who actually sent the bombs” after a list that conflated actual violent events like the 2017 shooting of Republican members of the Congressional baseball team and the anarchist anti-fascist conglomeration of groups known as Antifa with rhetorical calls by prominent Democrats for liberals to fight back against Republicans. The four Democrats Cardillo referred to — President Barack Obama, former Secretary of State Hillary Clinton, former Attorney General Eric Holder and U.S. Rep. Maxine Waters — all were intended recipients of pipe bombs.

Another of Finchem’s retweets asserted the bombs couldn’t be real because people took pictures of them. “You’re telling me these guys pulled this thing out, while it is apparently still counting down, and took a damn picture? FAKE NEWS,” tweeted @WyattEarpLA, a conservative Twitter personality with more than 71,000 followers.

Finchem also retweeted Jameson’s allegation that “the democrats are sending bombs to themselves” and the hashtag #MAGAbomber, a reference to a belief held by many liberals on Twitter that the bombs are the work of someone who supports President Trump, who has publicly harangued and demeaned all of the recipients of the bombs.

In a tweet of her own, House Majority Whip Kelly Townsend, R-Mesa, implied she believes there is a liberal plot to use the attempted bombings to influence the election in favor of Democrats.

Bomb scares 2 wks before an election.  I denounce these actions and call into question their timing. #JulieSwetnick

“Bomb scares 2 wks before an election. I denounce these actions and call into question their timing. #JulieSwetnick,” she wrote, referring to the woman who last month accused U.S. Supreme Court nominee Brett Kavanaugh of drugging young women so they could be gang-raped at high school parties in the 1980s.

Conservatives largely dismissed Swetnick’s claims, and many posited that she was a liberal provocateur who only made the claims so Kavanaugh wouldn’t be confirmed.

Sadly, Finchem and Townsend aren’t anomalies in applying a 9/11-truther approach to the matter. Almost as soon as news began breaking this week about potential explosive devices being sent to President Obama, the Clintons, CNN and liberal philanthropist George Soros, right-wing personalities began proclaiming that the actual target of the bombs was the political power of Republicans, not the people who they were sent to.

Both Finchem and Townsend are likely to be re-elected by voters in their districts next week.

**UPDATE: A Florida man has been arrested by federal law enforcement officials in connection with the bombings. It appears we will know soon what motivated the suspect to send explosive devices to a dozen people who have publicly criticized President Trump, all of whom have also been insulted and demonized publicly by Trump.

**UPDATE 2: The man arrested has been identified of Cesar Sayoc. He has a criminal past, is a registered Republican voter, and appears to be a devoted fan of Trump. He has been charged with 5 felony counts currently, but is expected to be charged further. The FBI said the pipe bombs were real and dangerous.